Curiosity, Endeavour, and Bill Nye on Your Phone

All these and more on this week's Planetary Radio

Phew! Thank goodness that's over. Now that we know who will be leading the free world for the next four years, let's get back to the really important topic of space exploration. This week's Planetary Radio presents excerpts from the first press briefing about atmospheric science conducted by Curiosity, the Mars Science Laboratory Rover, including the first, meager report on levels of methane in Gale Crater. The best news is that scientists have only begun their work.

Then we'll whisk you to the October 30 opening day ceremony for Space Shuttle Endeavour at the California Science Center in Los Angeles. Our own Bill Nye served as MC, with special guests including LA Mayor Antonio Villaraigosa and more than enough astronauts to conduct a shuttle mission. California Governor Jerry Brown delivered a particularly passionate speech about the importance of space to both our economy and humanity's greater purpose. 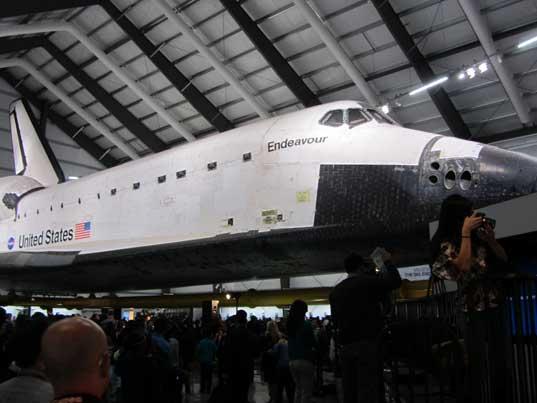 You'll also hear from one of the people who was responsible for getting Endeavour safely from LAX to its final resting place. The current display is temporary, as the California Science Center raises money for a much grander exhibit space. But it may be the better place to see a shuttle up close.

You can walk directly under the belly tiles that are just a handful of feet above your head. Now, I've been fairly close to shuttles ever since the '80s, but never this close. My attention kept straying from the terrific speakers to Endeavour itself--the scorched tiles, the reaction control system outlets, the stenciled writing indicating where to cut in case of an emergency. It's just magnificent. Here's a slide show that shows off both the bird and the ceremony.

Lastly, you have just two days left to get your Planetary Radio 10th anniversary message to us if you want a chance to have Bill Nye's voice on your answering machine. The deadline is Friday, November 9, at 10am Pacific. That will give us time to decide on a winner before we go to our Sagan Day Celebration that evening, a celebration you can watch live at 7pm Pacific. Phew, indeed.