March 12, 2014—I've put a check next to the top item on my bucket list. I'm home from Alaska, where I've finally seen the undulating, fantastic form of the Aurora Borealis.

I was in the 49th state by fortunate circumstance. A colleague at the Society was slated to be our representative to a group of 38 guests, mostly Society members, who had signed on for another of the wonderful Betchart Expeditions we co-sponsor. I had about two weeks to buy insulated boots, long underwear and the other life support systems I'd need for what might be bitterly cold nights in Fairbanks. 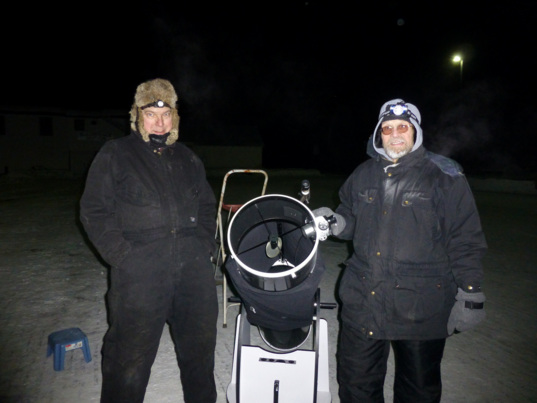 Yes, that's ice in his beard.

The trip started in Anchorage, a hard-working town in a spectacular setting. Nearly half of Alaska's 700,000 or so citizens live in the city or its suburbs. Justin and Karen would be our guides and protectors. They knew and loved the state, and they would enthusiastically share this love with the rest of us. They weren't quite space geeks, but that hole would be filled, once we reached Fairbanks, by Neal Brown, a jolly character who matched the bigger-than-life surroundings. 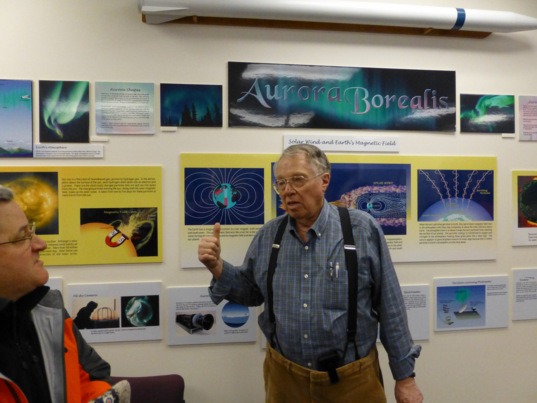 Neal's card now simply describes him as a "science enthusiast," but he is much more. For eighteen years, he ran the Poker Flat Research Range a few miles outside Fairbanks. We met him at the University of Alaska, which oversees Poker Flat. This was the day after we had shivered and stomped in an open field till 1am. It was 20 below (F.), when the milky white band of light in a clear sky suddenly coalesced into a sharply-defined ribbon stretching almost from horizon to horizon. The ribbon curled back on itself, splitting here and there, blossoming into brilliance elsewhere. This pulsing, fantastic vision really did make me forget the cold that had seeped through my jacket, flannel shirt and that long underwear, though I admit I was still painfully aware of my frozen toes. The display was no more than a pale green to the naked eye, but the photographers in our group captured much more striking hues with long exposures. I’ve posted a few to our Flickr page, along with some other fun stuff. 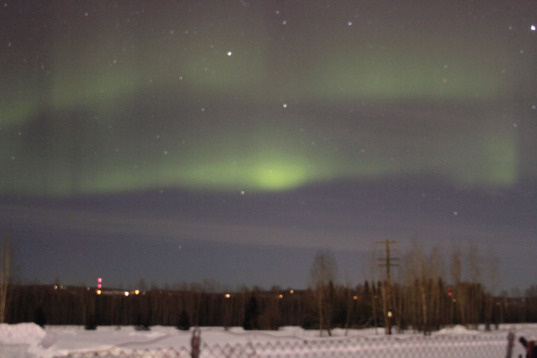 Ten minutes later it was over. The relatively sharp details dissolved, and the Aurora once more became a mere glowing fog high in the sky. We devoted two other nights to the quest. No luck. As I write this, sitting on the plane to LA, my new friends are still up there, hoping for a bit more luck on their last night. Still, we had seen what we came for, and the many other wonderful tour stops would have made the trip worthwhile even if the Aurora had never shown herself. You can see everything from moose to sled dog on Flickr. 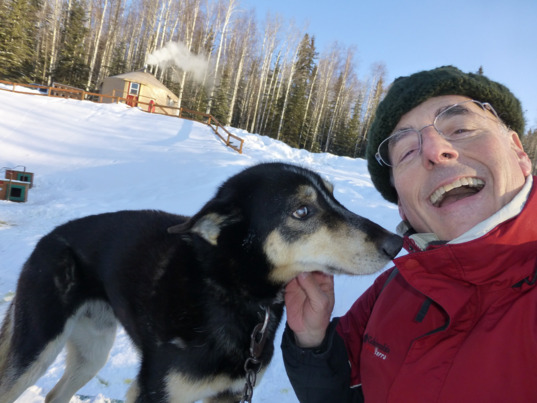 Sled dog Tommy. What a sweetheart!

Back to Neal Brown, who has joined my circle of favorite people interviewed for Planetary Radio. He began by giving us a spirited lecture introducing the Northern Lights, using the science behind them to amplify our wonder. Neal was also the right guy to answer our questions, including one that is asked by almost everyone who has learned anything about the Aurora: Do they make sound? You'll hear his more detailed response in an upcoming Planetary Radio episode, but the short answer is...maybe. He doesn't discount the reports by many, many viewers of a crackling like that heard from power lines on a humid day. But he and other researchers have had no success in attempts to record this, and they have tried mightily. Neal now speculates that the sensation may be generated in the brain, but he can offer no explanation of how this happens. He finds it interesting, and possibly supportive, that one person standing beneath the Aurora can have a clear impression of sound, while someone standing next to that person hears nothing at all.

We met Neal again the next day when our tour bus (Sorry, Paul! I meant to say motorcoach.) drove us high into the backcountry where the Poker Flat Range sits on 5,280 acres. This time he would tell us about his pride and joy, the rocket launching and research facility he ran for 18 years. We entered on Neal Brown Road, a tribute his staff honored him with and the University of Alaska has tolerated. Poker Flat has an amazing record of safety and success. It doesn't launch as many sounding rockets as it once did, but it has taken on other areas of research. And it has been operated on a relative shoestring. Neal likes to say the grass cutting bill at Wallops Island in Virginia is bigger than the entire Poker Flat budget, but I think there's some good-natured Alaskan hyperbole in that claim. 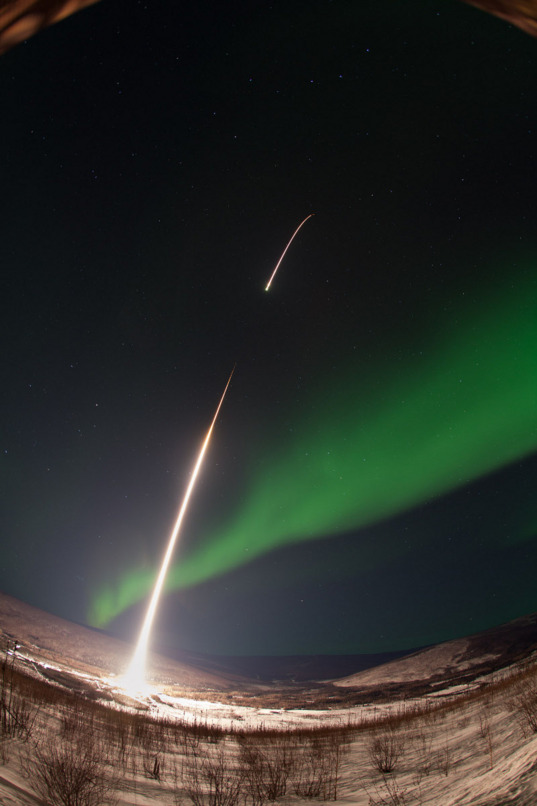 It's no exaggeration that a whole lot of rockets have gone skyward from this forested site. While they've never put anything in orbit, at least one payload reached an altitude of about 800 kilometers, far beyond low Earth orbit. Many of the missions have helped reveal the secrets of the Aurora, and some of these were coordinated with the passage of Earth-observing satellites.

It's the echo of the huge metal shell surrounding one of the Poker Flat launchers you'll hear when I recorded a second conversation with Neal. I hope you enjoy it and my pictures. It was just one highlight of many on a trip to a challenging paradise of the north that could only have been better if that ribbon of light in the sky had taken a few more minutes to awe us.

Love the photos! So disappointed I couldn't go, but definitely will another time. It looks like so much fun! That dog photo is so adorable. Can really tell someone enjoyed their trip :)