Hayabusa2 and OSIRIS-REx are bringing asteroid pieces back to Earth

It's the summer of sample return. Japan's Hayabusa2 recently arrived at asteroid Ryugu, and in August, NASA's OSIRIS-REx will start taking pictures of Bennu. These two spacecraft will start by surveying their target asteroids, and later, both will collect surface samples for return to Earth. Meanwhile, NASA and China are planning sample return missions to Mars for the late 20s or early 30s, and Japan's MMX mission plans to bring back a sample from Mars' moon Phobos.

But why go to all this trouble? After all, Hayabusa2 and OSIRIS-REx will also be studying Ryugu and Bennu in-situ—that is, right there in orbit—and Curiosity studies sampled rocks on Mars with portable chemistry laboratories. Sample return isn't cheap, either: One review estimated it will cost NASA $4 billion just to get the samples the Mars 2020 rover collects off the surface and into orbit, not counting a spacecraft to fly them back to Earth.

So, what's the benefit of sample return?

DIG DEEPER: The next issue of The Planetary Report has a cover story on sample return. Become a member to get your copy!

The limitations of robots

NASA's Curiosity rover is a rolling science lab that can scoop and drill soil and rock, and drop them into two instruments for analysis. On Earth, similar instruments might fill entire rooms, so engineers spent years shrinking them down into microwave-sized versions.

Unfortunately, this miniaturization comes with a trade-off, said Francis McCubbin, the astromaterials curator at NASA's Johnson Space Center. Miniaturized instruments aren't quite as sensitive, so they're only useful for answering certain questions.

"With robots, the quest is not usually to get the best answer, it's to get a good enough answer," he said. "If we need really high precision on an age, for instance, we're going to need to bring the samples back and run them in our high-precision geochronology lab."

Spacecraft instruments are also subject to mass and power constraints. They must be able to withstand getting shaken around during a rocket launch, which is hardly an ideal environment for sensitive science instruments. 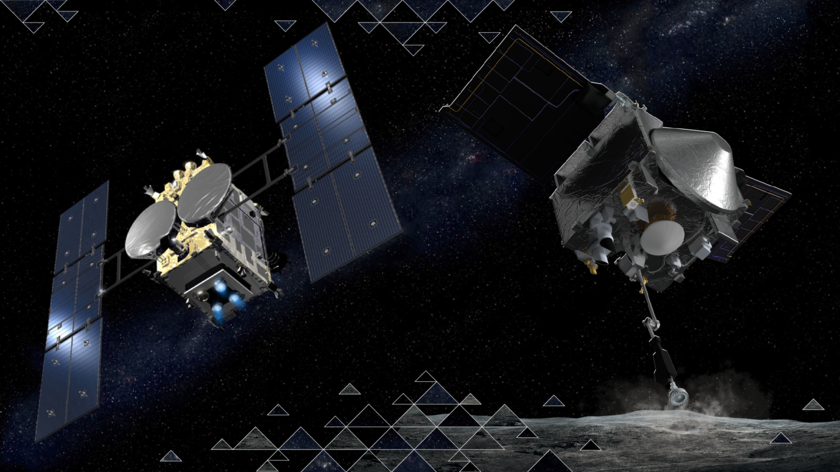 The benefits of storing astromaterials

ARES acts as a library for these samples. Institutions from around the world, as well as in-house research scientists, submit proposals to study the samples. ARES evaluates the proposals and loans out astromaterials accordingly.

"We have to keep track of every single speck of material," McCubbin said.

You might think that this rare collection has already been mined for every iota of useful science data. But thanks to ever-improving technology, scientists are always coming up with new questions, and new techniques for answering them. And that's another reason sample return missions are so valuable.

Take, for example, the most famous samples of all: the Apollo Moon rocks. Forty years after scientists concluded the Moon was bone-dry, a new technique applied to the Apollo samples found water. The technology used to find the water simply didn't exist back in the 1970s. It took a new generation of scientists, examining samples kept in pristine conditions for decades, to make such a groundbreaking discovery. 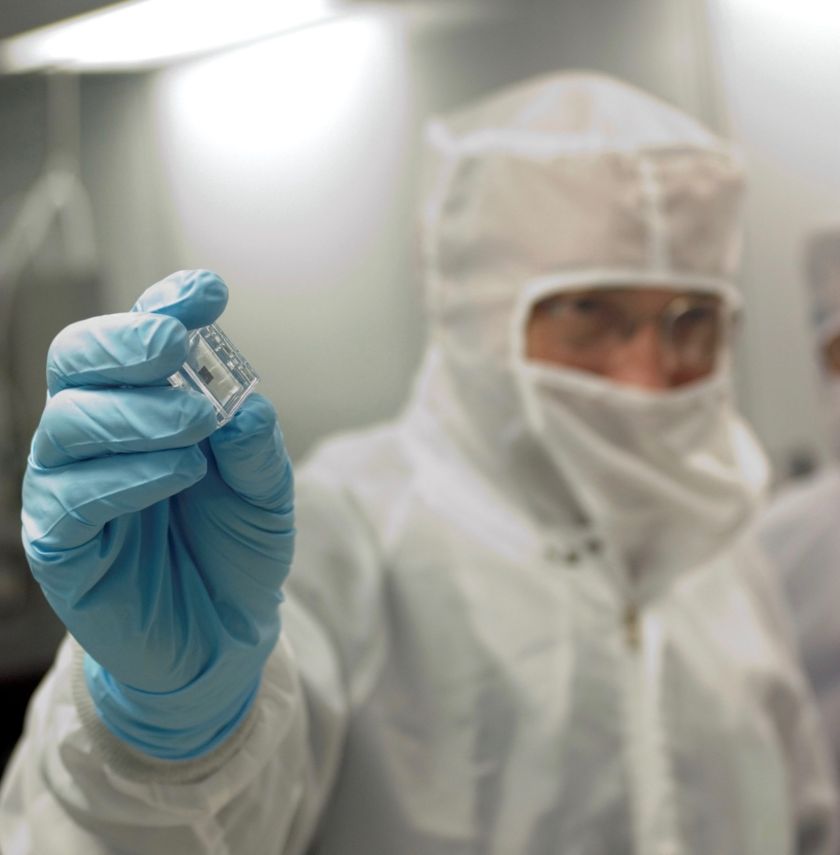 Francois Robert holds a sample from the Stardust mission in building 31 at Johnson Space Center.

NASA and Japan's space agency, JAXA, are teaming up to exchange samples from OSIRIS-REx and Hayabusa2. Keiko Nakamura-Messenger, a research scientist for both missions, told me NASA gets 10 percent of Hayabusa2 samples and JAXA gets 0.5 percent of OSIRIS-REx samples.

NASA will store its share of both missions' samples in a renovated section of the same Johnson Space Center building where Antarctic meteorites, Stardust samples, and cosmic dust are stored. The missions will share an entrance room and anteroom, but have separate air showers and clean rooms. Design plans for the renovation include special conditions for lighting, air circulation, and paint, as well as a list of materials restricted from the room that includes Latex and magnets.

Hayabusa2 will get home first, in 2020. The spacecraft's sample capsule will land in the Australian desert, similar to the first Hayabusa mission. From there, the samples head back to JAXA's curation facility for initial analysis before being distributed to researchers around the world.

Three years later, on September 24, 2023, the OSIRIS-REx return capsule will plummet back to Earth and land at the Air Force's Utah Test and Training Range west of Salt Lake City. Teams will pick up the capsule and transport it to a portable clean room, where they will extract the inner sample canister and ship it to Houston within two or three days. Like JAXA, NASA has done this type of recovery before, with Genesis in 2004 and Stardust in 2006. (Genesis notably crash-landed, breaching the sample container, but scientists still retrieved enough fragments of collectors with solar wind to complete most of the mission's primary science goals.)

The first task in the OSIRIS-REx clean room will be to open the sample container. The bulk of the sample will be trapped in the spacecraft's TAGSAM head, and TAGSAM also has sticky exterior pads that will have picked up fine-grained material upon touching the surface of Bennu. Scientists will remove the material from TAGSAM "in a controlled way," said McCubbin—meaning the process is more methodical than, say, emptying the dust from your vacuum cleaner into a trash can.

Sample processing occurs in two phases. First, OSIRIS-REx mission scientists will spend about six months curating and analyzing the samples, completing a "general description of what we really got," said Nakamura-Messenger. This process will help complete the mission's key science objective: to return and analyze a sample of Bennu's surface. During this phase some of the material will be analyzed in Houston, and some will be examined at other institutions.

By March 2024, the mission will move on to phase two of sample processing, in which NASA begins accepting study proposals from the worldwide science community to study the OSIRIS-REx samples. 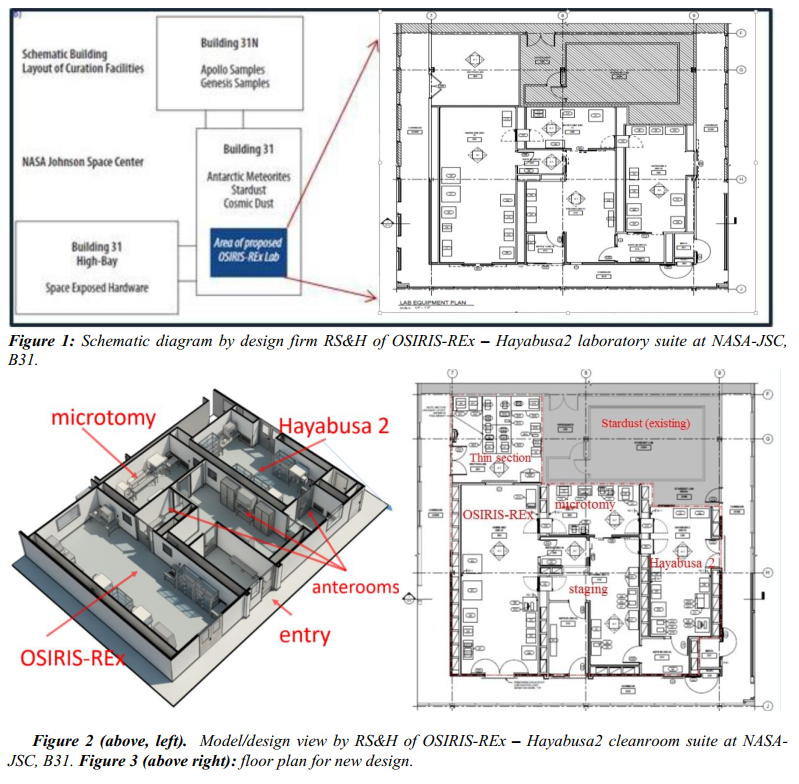 Plans for the new sample curation facility at Johnson Space Center, which will house samples from OSIRIS-REx and Hayabusa2.

The question of life

OSIRIS-REx is visiting Bennu because it's a carbon-rich asteroid that may host the chemical precursors for life. Scientists hope to analyze Bennu's organics at an isotopic level to determine if they come from inside or outside of our solar system—something that can only be done in an Earth lab.

Kevin Righter, a curator for the OSIRIS-REx mission, said this won't be a problem for the Bennu samples, based on prior analysis of meteorites from Antarctica.

"We know from carbon-rich meteorites that we can tolerate terrestrial contamination," he said. But when it comes to samples from a place like Mars, which will have a lower concentration of carbon, contamination is a big concern.

NASA's office of planetary protection categorizes a Mars sample return mission as class V restricted—meaning it requires quarantine protocols on par with the Ebola virus. No space agency currently has a class V sample return facility, but McCubbin says "we can build that, no problem."

It may ultimately take sample return to definitively answer whether life exists, or once existed, on Mars. McCubbin said that even a miniaturized scanning electron microscope on a rover might not be able to tell whether something that looks life-like was created by inorganic processes.

"If we're going to find life elsewhere, we need sample return," he said.

OSIRIS-REx and Hayabusa2 don't expect to find life on their target asteroids, but Nakamura-Messenger expects the missions to reveal exciting new clues about the solar system. She cited the Stardust mission, which detected minerals that can only be created at high temperatures. That provided new evidence that comets can form near the Sun, get thrown out to the outer reaches of the solar system, and return as the cold, dirty ice balls we typically picture.

"Sample return missions always give us a big surprise," she said.

That is a great article! Thanks for thinking to do it Jason! These sample return missions are going to be awesome! I do prefer astronauted missions to do this since people can do it better. I fly out anyone wanting to go! Yes I will fly you back also!