It's finally happening. Nearly 8 years after the final space shuttle flight, a crew-capable spacecraft is once again ready to launch from Kennedy Space Center, Florida. SpaceX's Crew Dragon is scheduled to blast off for a 6-day, uncrewed test flight on 2 March at 02:49 EST (07:49 UTC). If all goes well, the spacecraft will dock at the International Space Station (ISS) on 3 March around 06:00 EST (11:00 UTC) and stay there until 8 March, when it returns to Earth and splashes down in the Atlantic Ocean off the Florida coast.

There are no posts matching your search criteria...

The inaugural Crew Dragon launch, formally named DM-1 (Demonstration Mission 1) or Demo-1 in NASA parlance, is part test-flight and part operational ISS mission, all designed to show that the vehicle can safely carry astronauts to and from the ISS without posing any risk to the station. If successful, it will be a huge milestone for NASA’s commercial crew program, which has been waiting for private companies to fly NASA astronauts since the George W. Bush administration first picked SpaceX and Orbital Sciences Corporation (now Northrop Grumman) for cargo resupply missions in December 2008.

At that point, the Ares I rocket and Orion were poised to succeed the space shuttle for ISS crew transportation, but the Obama administration went all-in on commercial companies by cancelling NASA’s Constellation program in February 2010. The space shuttles retired in 2011, leaving NASA in the precarious situation of having to pay Russia for taxi flights on Soyuz vehicles.

In 2012, NASA selected SpaceX, Boeing, and Sierra Nevada Corporation as crew transportation partners, making the companies eligible for paid ISS flights. SpaceX predicted it would launch its first crewed Dragon flight by 2015, but 2 launch disasters, technical problems, and insufficient NASA commercial crew budgets kept pushing that pledge into the future. The future is finally now: NASA says the first crewed SpaceX flight, with astronauts Robert Behnken and Doug Hurley aboard, could come as soon as July — providing this weekend’s test flight completes all of NASA's test objectives without any major hiccups. 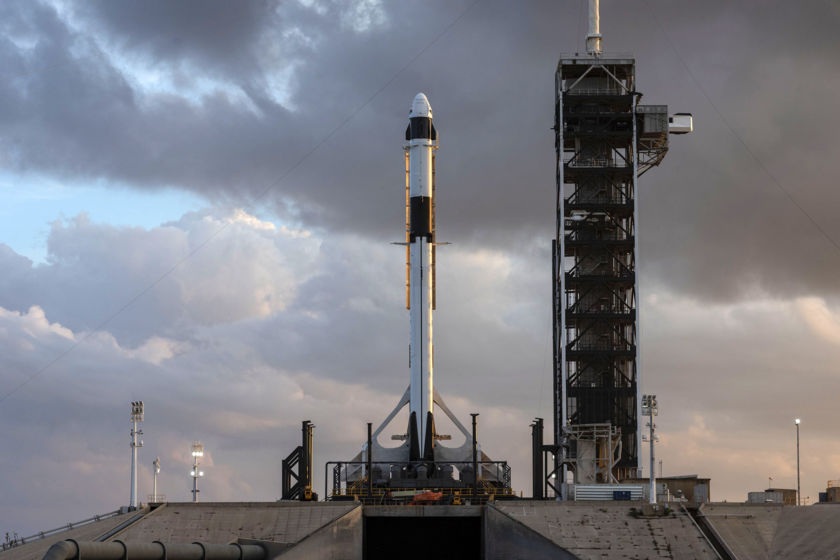 SpaceX's Crew Dragon sits on the launch pad during tests on 3 January 2019.

The Crew Dragon that will launch early Saturday is designed to operate as close as possible to a crewed spacecraft without a living, breathing human aboard. There is at least one seat in the capsule, carrying an anthropomorphic test device (ATD) in a SpaceX spacesuit, outfitted with sensors to measure the forces astronauts will endure when they ride in Crew Dragon for real. The vehicle will also have dosimeters aboard to measure radiation levels.

Since Crew Dragon is headed to the ISS, NASA went ahead and packed it with about 181 kilograms (400 pounds) of cargo. That's much less than a typical cargo flight, but the shipment will include some extra hardware and supplies, and the station astronauts will send some cold storage samples back to Earth when Dragon departs.

Here are the official objectives of the test flight. NASA informally posted them on its commercial crew blog, so I asked them for a formal list and received this:

The launch procedure is nearly identical to a standard Falcon 9 countdown, using SpaceX's accelerated "load-and-go" propellant filling procedure. There are a scant 35 minutes between the start of fuel loading (both RP-1 propellant and liquid oxygen) and the moment of ignition. The ascent trajectory will be aggressive enough and the fuel load large enough that Falcon 9's first stage will not be able to return to the Space Coast; it will land on the drone ship Of Course I Still Love You.

Crew Dragon separates from the second stage about 11 minutes after liftoff. Just 1 minute later, it opens its articulating nose cone, which protects the vehicle's docking hardware during launch and reentry. There are no fold-out solar panels to deploy; Crew Dragon's solar cells are built in to the vehicle’s unpressurized trunk. It doesn’t need those larger solar panels because Crew Dragon’s power budget is smaller than Cargo Dragon, SpaceX’s Hans Koenigsmann said last week.

If the launch is scrubbed or delayed, there are 2 backup windows at 3-day intervals; after that, NASA and SpaceX may have to stand down for the Expedition 59 Soyuz launch on 14 March.

The reason for those 3-day intervals are some extra launch window constraints. First, NASA and SpaceX want Crew Dragon to reach the station in about 24 hours, due to a known issue with the vehicle's Draco thrusters where a portion of a thruster can — yikes — break loose. The temporary fix is to keep the propellant warm in sunlight with some fancy flying. (A permanent fix will be added before the crewed mission, NASA’s Bill Gerstenmaier said last week.)

Another constraint is that Crew Dragon needs to splash down during the day so that ground-based cameras can evaluate the performance of the vehicle’s parachutes. Here's the full launch schedule, cobbled together from NASA press releases and email exchanges:

Once on orbit, Crew Dragon will catch up with the ISS using a series of phasing maneuvers, arriving at the station around 24 hours after launch.

There is a major difference in the way Crew Dragon and Cargo Dragon approach and connect to the ISS. Cargo Dragon approaches the station solely from underneath, on the RBAR (radius vector), until it is close enough to be grabbed by Canadarm2, which moves it to an open port for berthing.

Crew Dragon, on the other hand, does not berth—it docks directly to the International Docking Adapter on the front of the station (the IDA connects to Pressurized Mating Adapter 2, which connects to Node 2, Harmony). Here’s a render of Crew Dragon approaching; the IDA is the white cap, and PMA-2 is the canted black tunnel attached to Node 2. 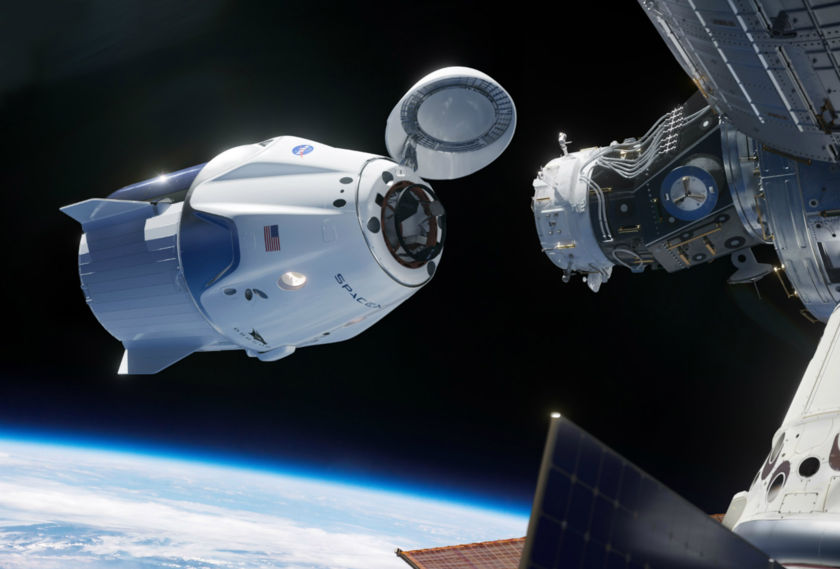 Crew Dragon prepares to dock with the ISS via the International Docking Adapter (IDA). The IDA is the white cap connected to the Pressurized Mating Adapter 2 (PMA-2), the canted black tunnel.

From last week’s press briefing, it sounded like Crew Dragon will approach on the RBAR before translating over to the VBAR (velocity vector), similar to the way the shuttle did. Unfortunately, as of Wednesday morning, there’s still no press kit available from either SpaceX or NASA for this mission! Here’s a reminder of the way the shuttle approach worked; note step 6, where the shuttle paused at the translation point to do a belly flip so astronauts in the cupola could photograph its heat shield: 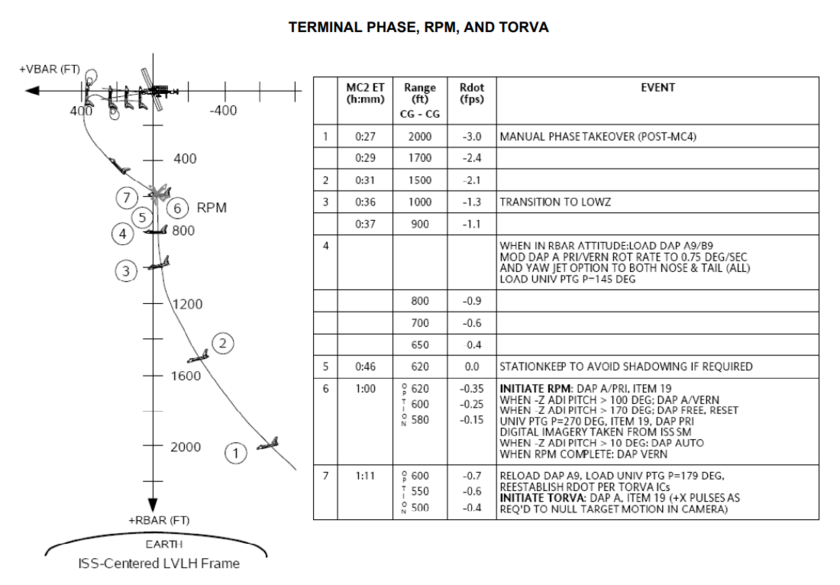 From the STS-135 rendezvous plan, the final flight of the space shuttle program.

As Crew Dragon approaches, NASA astronaut Anne McClain and Canadian Space Agency astronaut David Saint-Jacques will be monitoring from the Cupola and conducting vehicle tests. Once Dragon docks, NASA TV will cover both the hatch opening and a welcome ceremony scheduled for Sunday.

Note: Times in bold have changed since this article originally posted. 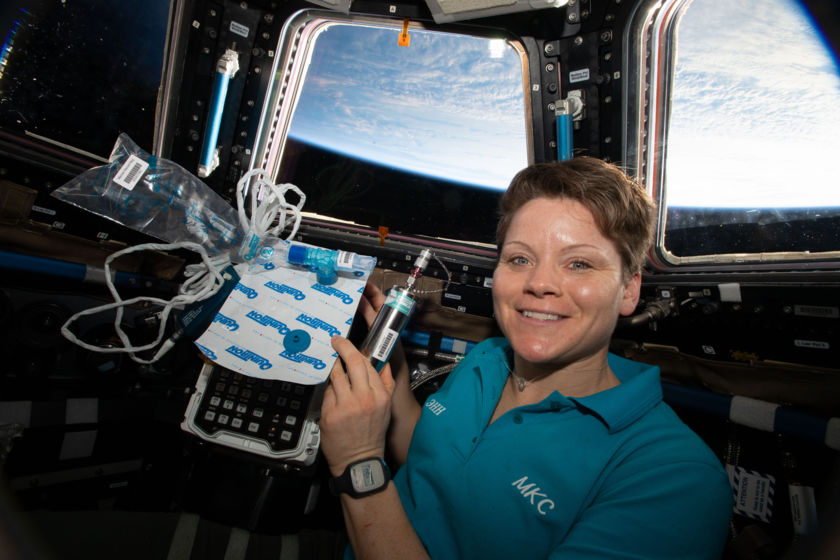 Anne McClain in the ISS Cupola

Anne McClain in the ISS Cupola, in February 2019.

After undocking on 8 March, Crew Dragon will visually inspect the IDA it was just connected to, before leaving the vicinity of the ISS and conducting a deorbit burn 5 hours later. Unlike Cargo Dragon, which lands in the Pacific Ocean, Crew Dragon will splash down a couple hundred miles off the coast of Florida, where NASA can retrieve the crew and vital cargo and return them to shore within 2 hours. For this test flight, the splashdown point will be a little farther out than it would be for eventual crewed flights.

Both NASA and SpaceX fully expect glitches during the test flight, but even if things go perfectly, Crew Dragon has a few more hurdles to clear before carrying astronauts in July. There's an ascent abort test planned in June, where Crew Dragon will blast itself away from a Falcon 9 mid-ascent. SpaceX also has to complete its parachute qualification tests. No fewer than 17 have been performed to date, but there are more to go before NASA will certify the vehicle safe for crew. Finally, NASA is still working with SpaceX to make sure the agency is fully comfortable with SpaceX’s redesigned COPVs (Composite Overwrapped Pressure Vessels); a COPV inside a Falcon 9 second stage liquid oxygen tank was the cause of the 2016 Amos-6 pad accident.

As previously mentioned, the next Soyuz crew launch occurs on 14 March, when Nick Hague, Christina Koch, and Alexey Ovchinin join the crew of Expedition 59. There are 3 spacewalks planned for late March and early April, followed by a Cygnus resupply flight on 17 April and the CRS-17 Cargo Dragon mission later that month. Boeing’s Starliner test flight would presumably happen after that, followed by a pad abort test as soon as May.