The Downlink: Spitzer Says So Long, Voyager 2 Recovering after Glitch 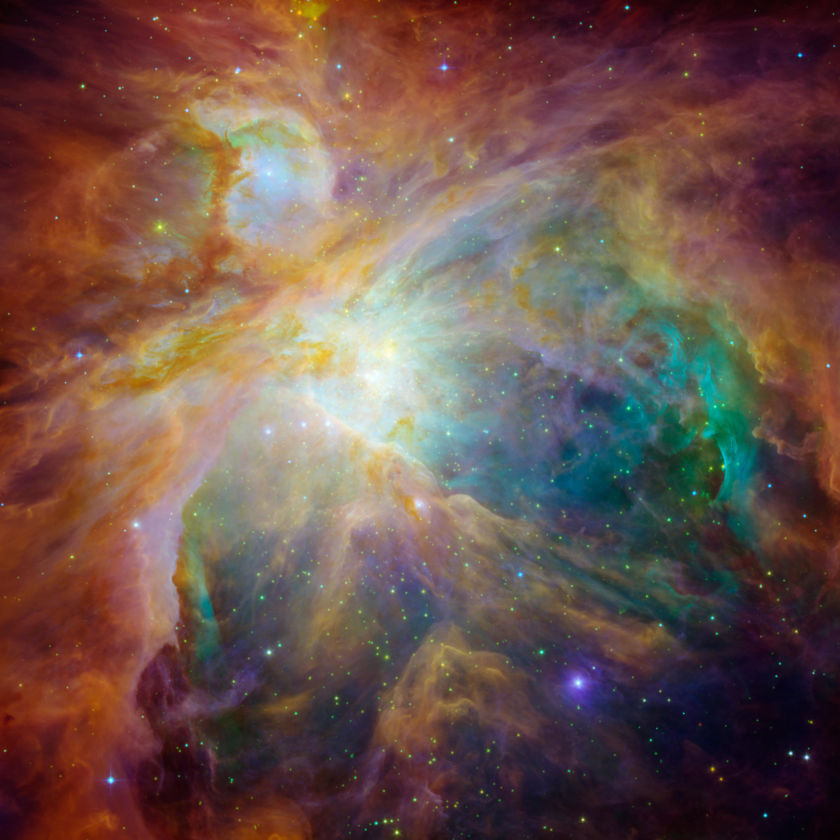 The Orion Nebula by Hubble and Spitzer

This image of the Orion nebula was created using data from the Hubble and Spitzer Space Telescopes. Hubble sees in ultraviolet and visible light, while Spitzer sees in infrared light. When combined, these views produce a richer view of the nebula than what human eyes can see.

NASA shut down the long-lived Spitzer Space Telescope this week. Launched in 2003 on a two-and-a-half year mission to study the universe in infrared light, the telescope made vital contributions to astronomy and exoplanet science. Here are highlights of some of Spitzer’s exoplanet discoveries.

NASA’s stalwart Voyager 2 spacecraft automatically and safely switched off its science instruments after overdrawing its available power. The spacecraft, which launched in 1977 on a tour of the outer planets, is currently exploring interstellar space. Its radioactive power supply fades by about 4 watts each year. Engineers are reviewing data from Voyager 2 and expect it to return to normal operations soon.

The International Space Station is getting a new, privately operated module as part of NASA’s plan to open up the station for commercial opportunities. Axiom Space, a company we profiled in 2017, plans to launch the module in 2024 and connect it to the station’s forward-most port. That port was used in the past by visiting space shuttle crews.

Astronauts Andrew Morgan and Luca Parmitano completed the fourth and final spacewalk outside the International Space Station to repair the Alpha Magnetic Spectrometer, a science instrument that helps astronomers hunt for dark matter. Meanwhile, a Cygnus cargo spacecraft stuffed with trash departed today. It will eventually be sent into the atmosphere to burn up.

CHEOPS, the European Space Agency’s CHaracterising ExOPlanet Satellite, successfully opened the protective cover of its telescope. The cover, akin to a camera’s lens cap, protected the telescope’s mirror and electronics during launch. CHEOPS, which launched in December 2019, will precisely measure the diameters of known exoplanets. Learn more about CHEOPS here.

NASA marked its annual Day of Remembrance to honor astronauts who have perished in spaceflight over the years. The day is timed to coincide with several tragic space anniversaries: the Apollo 1 fire on 27 January 1967, the Challenger disaster on 28 January 1986, and the loss of Columbia on 1 February 2003.

NASA’s James Webb Space Telescope is unlikely to meet its March 2021 launch date, according to a new report from the Government Accountability Office. The successor to the Hubble Space Telescope will serve a broad range of astronomers and planetary scientists by studying some of the most distant objects in the universe and directly imaging exoplanets. But first, it has to get off the ground; the telescope is severely behind schedule and over budget.

NASA’s Mars Reconnaissance Orbiter captured new views of the spot where Europe’s Schiaparelli lander crashed into the surface in 2016. The new images provide a much sharper view of the crater created by the lander. The spacecraft crashed after its computer erroneously determined that the spacecraft had already landed even though it was still almost 4 kilometers above the surface.