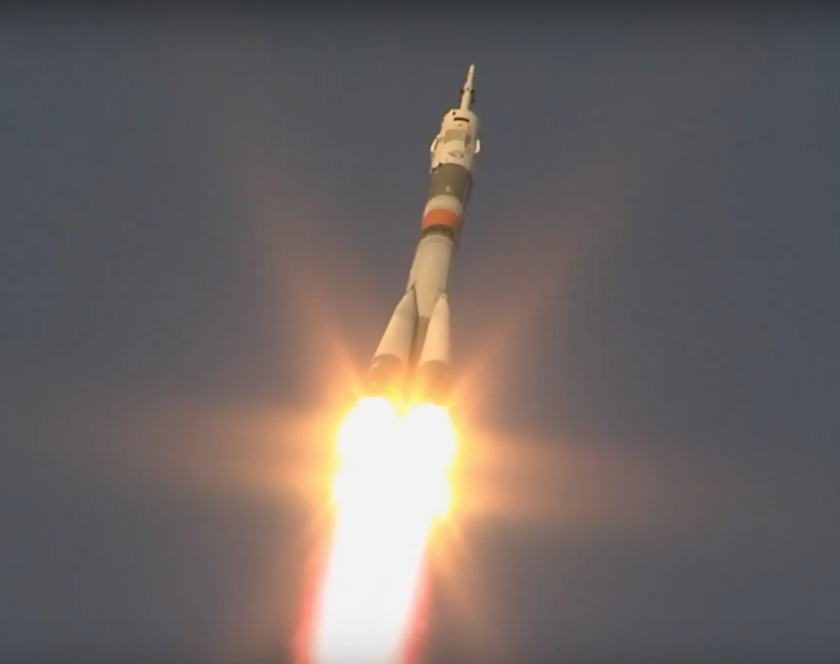 It was the first crewed Soyuz flight since 11 October, when a rocket carrying NASA astronaut Nick Hague and Russian cosmonaut Alexey Ovchinin spun wildly out of control, triggering the capsule’s automatic abort system. Hauge and Ovchinin endured up to 7 times the force of gravity as they were blasted away from their failing rocket, eventually landing under parachute 400 kilometers northeast of the launch pad. The two were unharmed, but the near-disaster rattled nerves and cast new doubts on the Russian space program, which has endured a string of recent mishaps.

The accident left the ISS with just three crewmembers who arrived on another Soyuz in June: Commander Alexander Gerst of the European Space Agency, NASA flight engineer Serena Auñón-Chancellor, and Roscosmos flight engineer Sergey Prokopyev. The Soyuz only has an orbital lifetime of about 200 days, though NASA said there was enough margin to keep the crew aboard until the end of January. The agency was also considering ways to operate the station without any crew at all.

But Russia’s investigation into the October accident lasted less than two months, and the next crew launch, originally scheduled to occur later this month, was moved up to today. Before the flight, NASA astronaut Anne McClain told ABC News she had full confidence in the Soyuz.

"The bottom line is that I would have got on the Soyuz rocket the next day," she said. "I know that a lot of people see [the prior accident] as a failure, it's been called that. But inside this community where we mitigate risk professionally every single day: that was a success story." 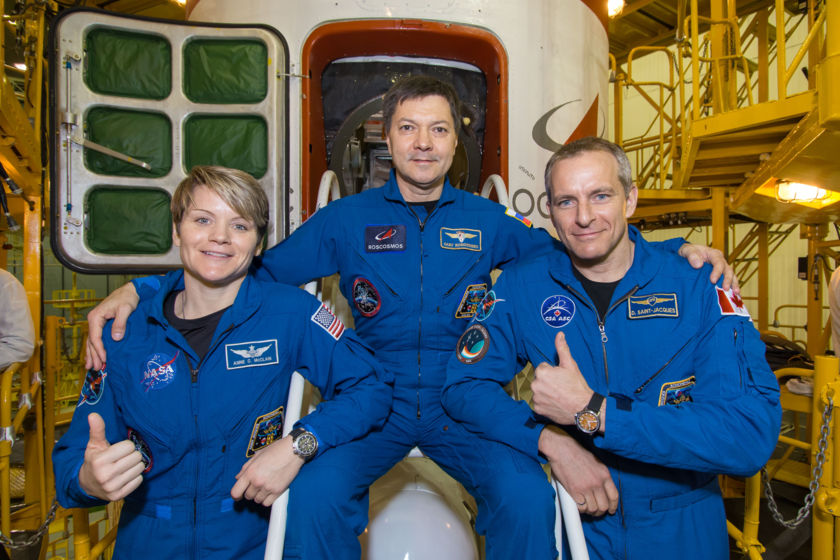 In the Integration Facility at the Baikonur Cosmodrome in Kazakhstan, Expedition 58 crewmembers Anne McClain of NASA (left), Oleg Kononenko of Roscosmos (center) and David Saint-Jacques of the Canadian Space Agency (right) pose for pictures Nov. 29 in front of the Soyuz MS-11 spacecraft during a final vehicle fit check. They will launch Dec. 3 in the Soyuz MS-11 spacecraft from the Baikonur Cosmodrome in Kazakhstan for a six-and-a-half month mission on the International Space Station.

The Soyuz rocket has four liquid boosters that separate about two minutes into flight. During separation, small valves automatically open on each booster's liquid oxygen tank, releasing residual pressure that pushes the boosters away from the rocket’s central core. On the last flight, one booster's valve failed to open. As the bottom of that booster pulled away, the top pivoted inward, puncturing the rocket’s second stage. Onboard cameras show the entire vehicle then tumbling before presumably breaking apart.

Russian officials said the problem was caused by a faulty sensor that was bent during the rocket’s assembly process. They did not offer more specifics.

"I just remember this very poignant realization that 'wow,' we just had a failure of the booster,'" said Nick Hague, the NASA astronaut aboard the flight, in a later Q&A. "There was a little bit of disbelief, because it hasn't happened in 35 years."

In 1983, a fire on the launch pad triggered the Soyuz tower escape system, blasting two cosmonauts away to safety. Prior to that, there had been only one other Soyuz launch accident: a 1975 in-flight abort late in the ascent, which sent the capsule on an emergency landing path that ended near the Chinese border.

Analysts and space historians say Russia's current rocket woes can be traced back to the fall of the Soviet Union in the early 1990s, which caused a major upheaval in most Russian industries — including aerospace. In a recent article for The Space Review, Dwayne Day, a senior program officer at the National Academy of Sciences, writes that a lack of new government-sponsored missions led to an exodus of talented scientists and engineers from the Russian space program.

"The lucky ones moved to the West, some finding jobs in European scientific institutions and a few even ending up in the United States," Day said. "Many others simply left their fields entirely. By the turn of the century, there were few experienced space scientists left in the country."

At the same time, as I've previously reported, Russia's population has declined. Larger economic pressures have forced the country to slash education funding and minimize space investments. Not enough young, well-trained rocket scientists are available to replace retiring space veterans. In an article for Aerospace America by James Oberg, a space writer and retired NASA engineer, former cosmonauts are quoted as agreeing with this assessment.

"The staff employed are either over 60 or under 30," said Georgy Grechko, who died in 2017. "There is no intermediate age group. A generation was lost for the space industry, when it was struggling to survive.”

The overall effect has been a sharp decline in labor quality — and that has led to accidents. From 2011 through 2018, The Planetary Society has tracked 17 launch failures (table below), equaling an average of 2.1 per year. This is the same window of time that the U.S. has been relying on Russia for crew transportation to the ISS in the wake of the space shuttle's retirement.

SpaceX and Boeing are both scheduled to begin crew flights to the ISS next year, but that timeline continues to slip. NASA recently announced the uncrewed test flight of SpaceX's Crew Dragon would occur on 7 January 2019, but NASA administrator Jim Bridenstine recently said that date was unlikely, predicting a vague window for the first half of 2019.

With McClain, Saint-Jacques, and Kononenko safely in orbit, ISS program managers hope to return to normal operations. First on the docket: the arrival of a SpaceX cargo vehicle, which is scheduled to blast off tomorrow, 4 December, from Cape Canaveral at 13:38 EST (18:38 UTC). On 11 December, both Russian cosmonauts are scheduled to take a spacewalk to inspect a mysterious hole found in the orbital module of the Soyuz that carried Gerst, Auñón-Chancellor, and Prokopyev to the station. The cause of the hole, which is now patched, is still under investigation by Russian officials.