Let's check in on The Planetary Society's asteroid hunters

Tomorrow is Asteroid Day, an international campaign to raise awareness of the threat posed by near-Earth asteroids, and what we can do about it. The Planetary Society has been supporting projects that hunt and track asteroids practically since its founding in 1980. Our Shoemaker NEO Grant program, which is now in its twenty-first year, funds advanced amateur astronomers who help determine if nearby asteroids will hit Earth.

In March, we announced our latest batch of Shoemaker grant winners. Seven proposals from four continents earned a total of $59,300. One of the conditions of our grants is for winners to send us progress updates for two years. When we send out a request for updates, we also invite past winners to tell us how they're doing. Here are some collected reports from our asteroid hunters.

Benishek was a first-time Shoemaker winner in 2018. He operates from the Sopot Astronomical Observatory in Serbia. His grant was for a new CCD camera and temperature compensating focuser that he used to create a second telescope system.

He got the new telescope up and running this spring, and it has already helped produce rotation periods for three near-Earth asteroids: (15745) Yuliya, (138847) 2000 VE62, and 2018 EJ4. Here's his light measurements for 2018 EJ4, which shows you how asteroid hunters obtain rotation periods by plotting the magnitude (brightness) of an asteroid over time. The rotation period of this particular asteroid is just 3.74 hours! 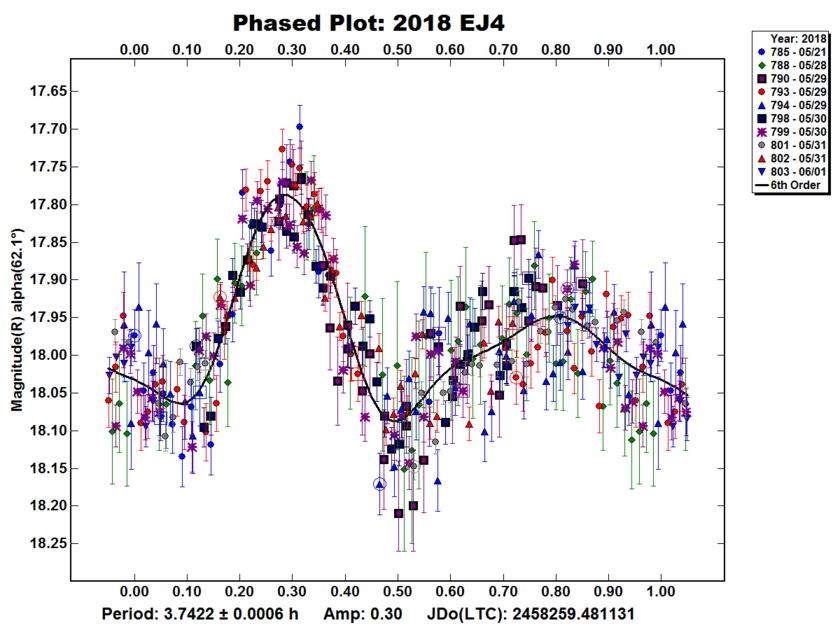 Coley, Stephens and Warner all observe at the Center for Solar System Studies (CS3) in Landers, California. We have awarded four Shoemaker grants to CS3 over the years; the latest was Coley, in 2018, to purchase a new camera for a 0.7-meter telescope. CS3 reports the camera is currently awaiting installation.

The group has nine telescopes devoted to asteroid research. In the past year, CS3 observed 331 asteroids and determined the rotational period of 279—127 of which were near-Earth asteroids. The rotational period work supports radar observations made by Arecibo and Goldstone, and help scientists conducting infrared observations, asteroid spin axis determination, and shape modeling.

One particularly interesting CS3 target was a "super rotator" asteroid named 2018 JX. It spins all the way around every three-and-a-half minutes! That means it's not a loose conglomerate of rocks, but something much more solid.

"To spin this fast, these objects must be very tightly strength-bound, i.e., nearly solid," Stephens told us in an email.

Holmes, the president of the Astronomical Research Institute (ARI) in Illinois, is a six-time Shoemaker winner dating back to 2007. His 2018 grant was to help purchase a CCD camera for a 0.61-meter telescope, freeing up a 1.3-meter telescope to focus on searching for objects dimmer than magnitude 22. The 1.3-meter telescope, which Holmes built from scratch over the course of six years, has a CCD purchased through a 2015 Shoemaker grant.

Last year, ARI was ranked first in faint NEO observations, with 1,659 observations fainter than 22nd magnitude. This year, Holmes says the group is on pace for more than 3,500!

On June 10, Holmes imaged a NEO called 2018 LL at a very dim magnitude of 23.3. Here's a cool animation of it traveling amongst a streak of background stars. The limiting magnitude in the image is even fainter: 24.2!

This animation of asteroid 2018 LL was captured at a very dim magnitude of 23.3.

Ory is a first-time Shoemaker grant winner, representing Oukaïmeden Observatory in Morocco. This is our first-ever grant for an observatory on the African continent. Ory is part of a team working on a project called MOSS, the Morocco Oukaïmeden Sky Survey. His grant was to purchase a new CCD camera for the project's 0.5-meter telescope, which is operated remotely by Ory, in Switzerland, and Claudine Rinner, in France.

Ory says the new camera was recently installed, but it will take a little longer for him to get initial results. We'll be running a feature story on Ory and Oukaïmeden Observatory next week, so keep an eye out for that!

Hug represents the Northeast Kansas Amateur Astronomer's League, which operates a 0.7-meter telescope at Farpoint Observatory in Kansas. The group's 2018 grant was to automate the telescope so it could be operated remotely.

The 0.7-meter mirror has an interesting history. It originally belonged to the University of Kansas and was meant to be used to determine asteroid orbits. Clyde Tombaugh (of Pluto discovery fame) oversaw final construction of the telescope during his Master's thesis work in the late 1930s.

The telescope was dismantled around 2000 and its mirror was given to the Astronomers League. In 2003, the group won a NASA grant to conduct asteroid follow-up observations, and built a telescope using the 0.7-meter mirror. They christened it the "Clyde Tombaugh Telescope" at Farpoint Observatory.

Hug tells us the group is making good progress on automating the telescope. They are buying new power backup systems, weather sensors, all-sky and security cameras, and digging a quarter-mile trench for an Internet cable.

"Thanks to the Planetary Society, the Tombaugh Telescope will once again be used for what it was originally intended when it's mirror was made in the 1930's—to scan the skies for asteroids," Hug writes. "I think Clyde Tombaugh would be pleased." 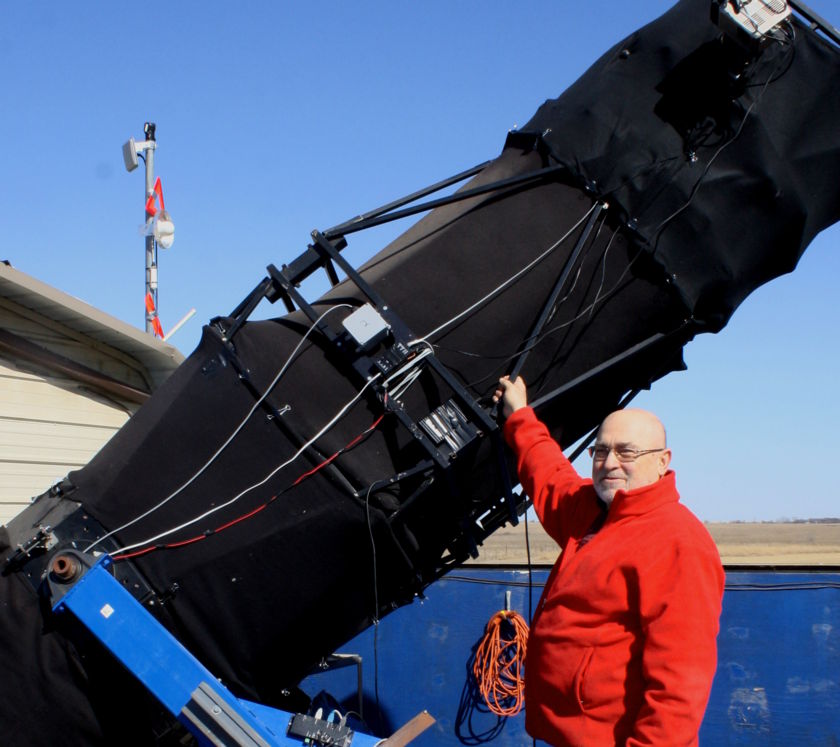 Oey's Shoemaker grant was to purchase a 0.5-meter telescope for a dark, dry observing site outside Bathurst, Australia. This will complement his existing observing location at Blue Mountain Observatory, west of Sydney.

Fortunately for Oey and The Planetary Society, Hubble Optics offered to upgrade Oey's telescope purchase from 0.5 to 0.6 meters. The telescope will be delivered in three to six months. Thanks, Hubble Optics, for contributing to the Shoemaker NEO Grant program!

Pray won a 2018 grant to purchase a new mount for his 0.5-meter telescope at Sugarloaf Observatory in Massachusetts. He has already bought the mount, installed it, and put the upgraded telescope back into operation!

Pray is big on binary asteroids. In recent years, he has confirmed more binary asteroids than any other amateur observer. (Vladimir Benishek, another Shoemaker winner, was second!) The new telescope has already been used to confirm one binary asteroid: (17700) 1953 XU1.

Additionally, Pray sold his old telescope mount and used it to purchase a new CCD camera. He tells us the camera is being manufactured and will be ready for installation soon. 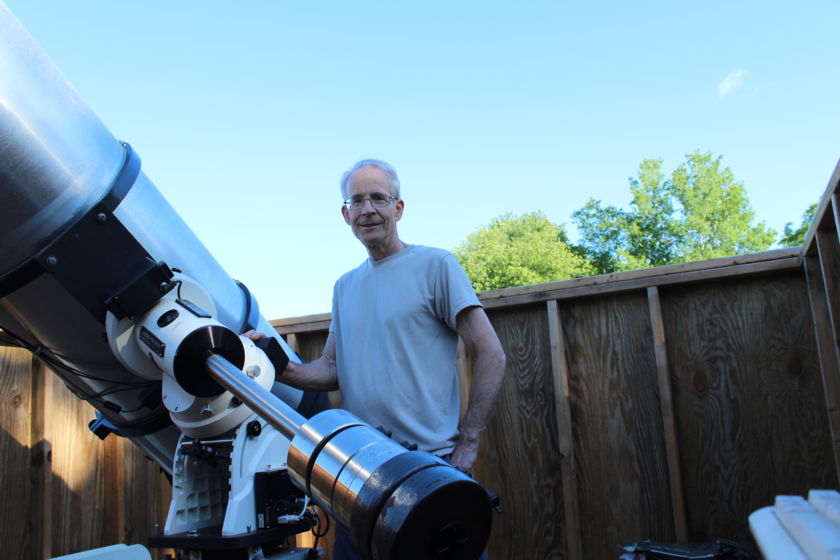 Donald Pray shows off the new mount for his 0.5-meter telescope, purchased with a Shoemaker NEO Grant.

Buzzi was a 2015 Shoemaker winner who received a grant to upgrade the CCD on his 0.84-meter telescope. He operates from the G. V. Schiaparelli observatory, near Varese, in northern Italy.

In 2018 alone, Buzzi reports he has submitted data on 834 objects, 270 of which were classified as near-Earth.

"Our new 84-centimeter telescope is performing really well!" he wrote. "The increase in productivity is really high. This is possible thanks to the new CCD camera purchased with the Shoemaker NEO grant."

With such a large telescope and quality CCD camera, Buzzi can pick out objects as faint as magnitude 22. He sent us an image of one such object, circled in red:

Last but not least, Wesley is a unique Shoemaker grant winner from 2010 who once observed asteroid impacts on Jupiter. He is continuing his planetary imaging work, and sends us this June 23 picture of a very dusty Mars, where the Opportunity rover is still hunkered down: 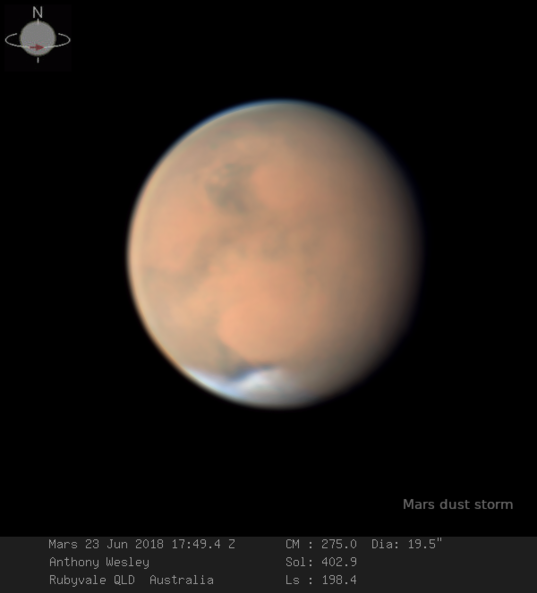 This image of Mars shows the global dust storm that engulfed the planet, affecting operations of NASA's Opportunity rover.

"As ever, our solar system remains a dynamic, unpredictable and fascinating place to study," Wesley wrote.

Thank you to all the winners and also those who participate in this wonderful and badly needed program! You all are helping to keep the planet safe with your great astronomy skills of which I am please to see people doing. Best wishes for maximum viewing over the endless nights to come. Endless Nights -- a catalogue of all of your discoveries through the NEO program from the beginning up to the current time as of the writing? That would make for an interesting catalog to have. A portion of the proceeds can go back to the NEO program. Hmm? Download them onto a TPS server so a selected established author can write them into a catalog. Just an idea.

Thanks for nice info about ongoing funded research. Picture from Luca Buzzi is missing, last paragraph states: "... one such object, circled in red:"