On Wednesday afternoon, the next trio of International Space Station residents will launch from the Baikonur Cosmodrome in Kazakhstan. Soyuz TMA-10M is scheduled to lift off at 4:58 p.m. EDT (20:58 UTC, 2:58 a.m. Thursday Kazakh time), carrying Oleg Kotov, Sergey Ryazanskiy and Michael Hopkins into orbit for a six-hour journey to the orbital outpost.

Ryazanskiy and Hopkins are rookies. Kotov is a veteran, having first visited the station with current commander Fyodor Yurchikhi for Expedition 15 in 2007. In 2009, Kotov returned for Expedition 22, and became the commander of Expedition 23 in 2010.

If you watch live on NASA TV, you’ll typically hear three sets of voices: Russian communications between the ground and Soyuz, an interpreter, and a NASA Public Affairs Officer. NASA PAOs do a great job of narrating launches, relying on interpreters and launch guides to keep everything straight.

Interpreter Elena Kozhukov, whom I profiled in July, has generously helped put together a guide to common Russian launch phrases. You'll want to listen for the English transliterations. Some of the literal translations are rooted in military terminology, so an English explanation is also given.

Here's to a smooth Подъем! 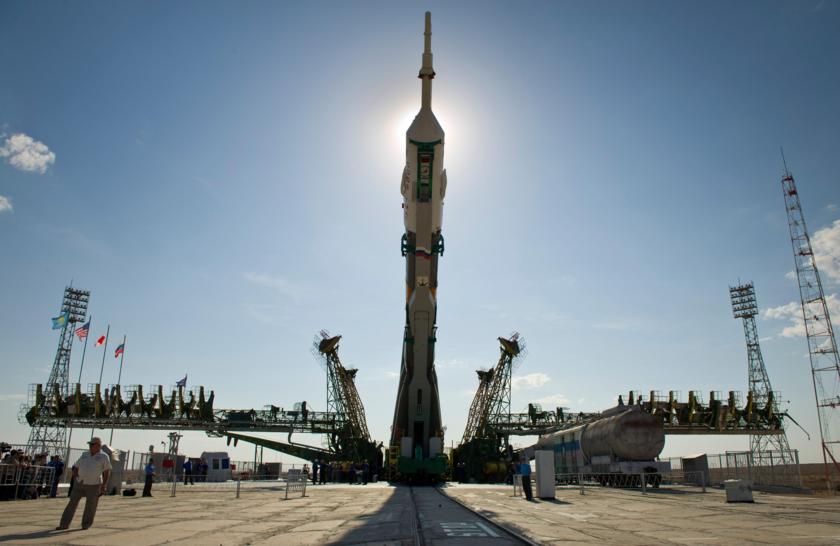 Soyuz TMA-10M sits atop its rocket in Baikonur, Kazahkstan following rollout on September 23, 2013. The letters Союз TMA (Soyuz TMA) are stamped on the capsule's payload fairing.

Thank you Jason, this is very useful - However: in your table, in the 'English transliteration' column, you need to put 'Drenazh ' where 'Nadduv' currently is, and vice-versa. Cheers.

Thanks for noticing! I fixed it.

Great stuff, as alwasy! Two comments: 1) Is it "Pratyazhka" or "Protyazhka"? 2) The sequence "Preliminary - Intermediate - Main" seems to be unchanged since the days of the A4 (V2) launches...

Great article Jason as always! Keep up the great work, on covering the wonderful and (more important) manned side of space exploration!

Thank you Elena Kozhukov & Jason for the great team effort making for a great article!