Here are some recent postcards from Jupiter

What's new out at Jupiter? We haven't looked in on NASA’s Juno spacecraft since (checks blog archive) May. Juno completed its 14th close flyby of Jupiter on July 15, and as of Tuesday morning, it was 8 million kilometers from Jupiter, gradually working its way back toward the planet following apojove.

In general Jupiter news, astronomers have found 12 new Jovian moons, while one of Juno's instruments saw what may be a new volcano on Io!

And, of course, there are some recent pretty pictures from JunoCam, brought to you by image processors from around the world.

Let's start with a nice wide shot from perijove 14:

Jupiter as seen on perijove 14.

Very nice! Let’s get closer for a natural color view: 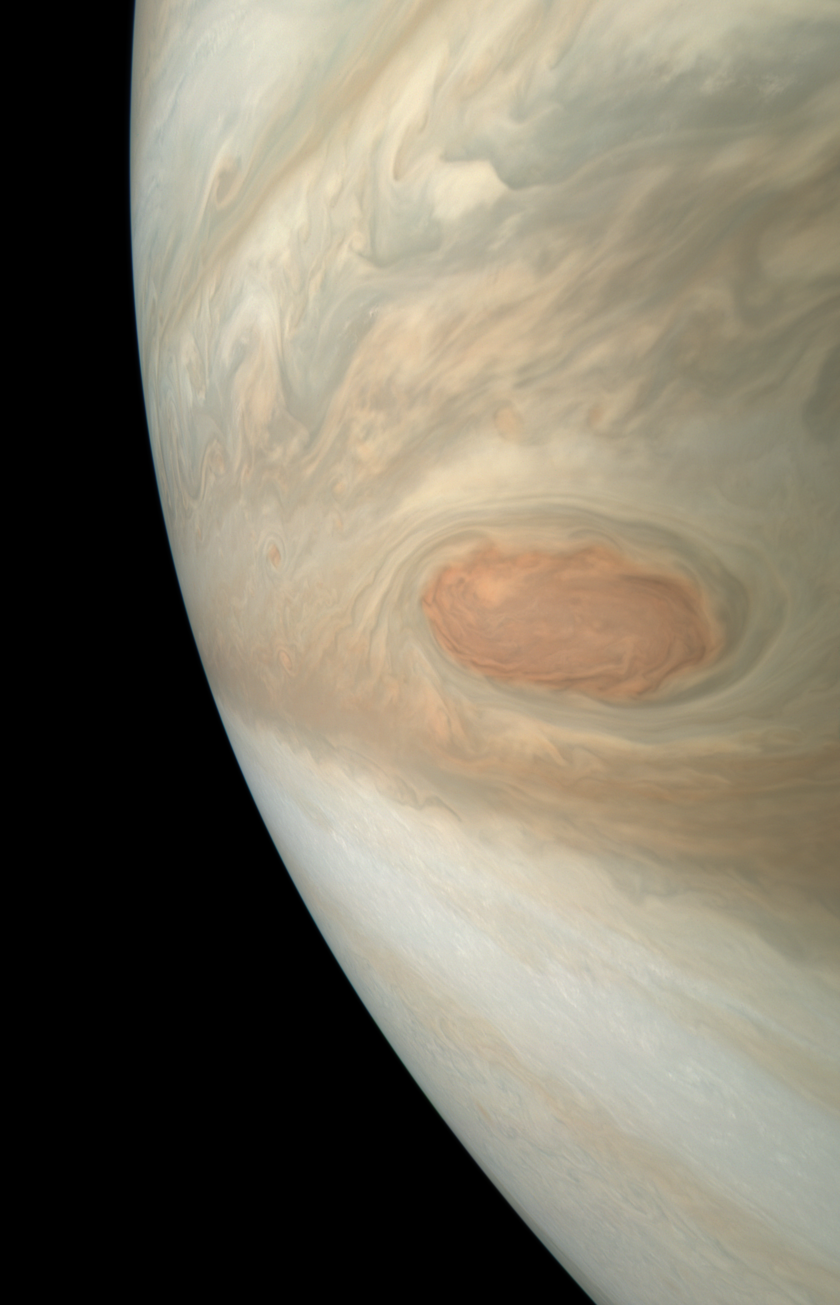 Juno spies a storm in Jupiter’s South Equatorial Belt during perijove 14. Though similar in appearance, this is not the larger Great Red Spot. The image was taken on July 15 from a distance of 8,000 kilometers above the cloud tops.

That swirly storm is not, in fact, the Great Red Spot, though it’s very similar in appearance. It’s a much smaller storm in the South Equatorial Belt. Juno was just 8,000 kilometers above the cloud tops at the time! 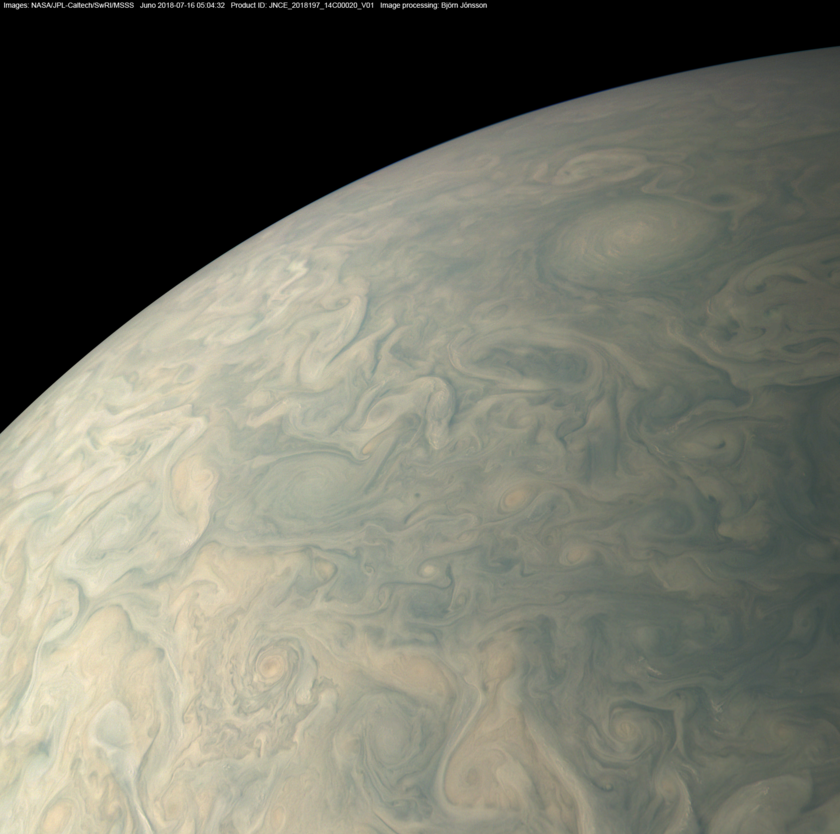 An image of Jupiter during Juno perijove 14, from a distance of about 12,000 kilometers.

This shot was taken from about 12,000 kilometers above Jupiter, and like the image before that, it approximates what you’d see with your own eyes if you were an astronaut aboard the spacecraft. 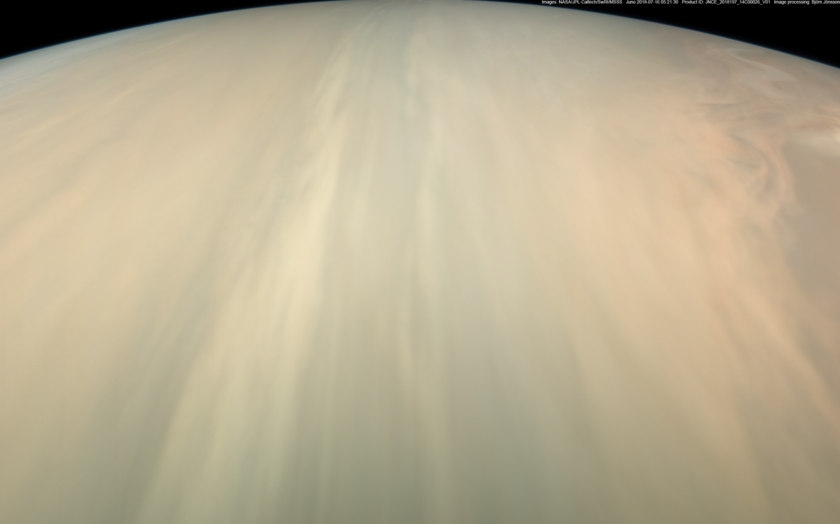 Jupiter as seen during Juno perijove 14, from a distance of just 3,800 kilometers.

This image was taken from just 3,800 kilometers above the cloud tops—less than the distance between New York and Los Angeles! It reminds me of some of Cassini’s final images when it was diving through the rings. At such close ranges, the fine detail you see when viewing gas giants from afar gives way to a more homogenized appearance.

Speaking of detail, here’s a look at some incredible swirls and vortices, some of which have clouds that show vertical relief: 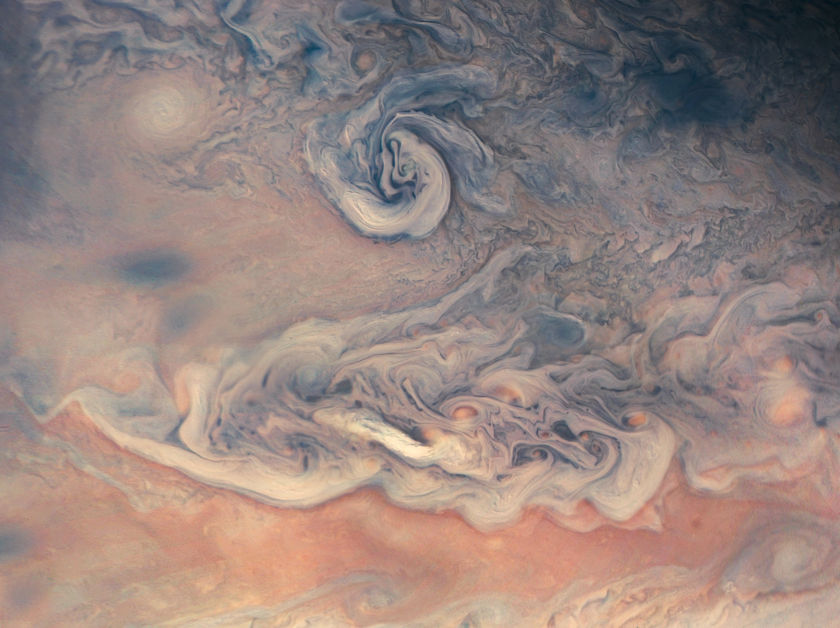 An image of Jupiter during Juno perijove 14.

And to finish this postcard roundup, here’s a different version of the above image, zoomed and projected differently. It looks like a fancy coffee drink: 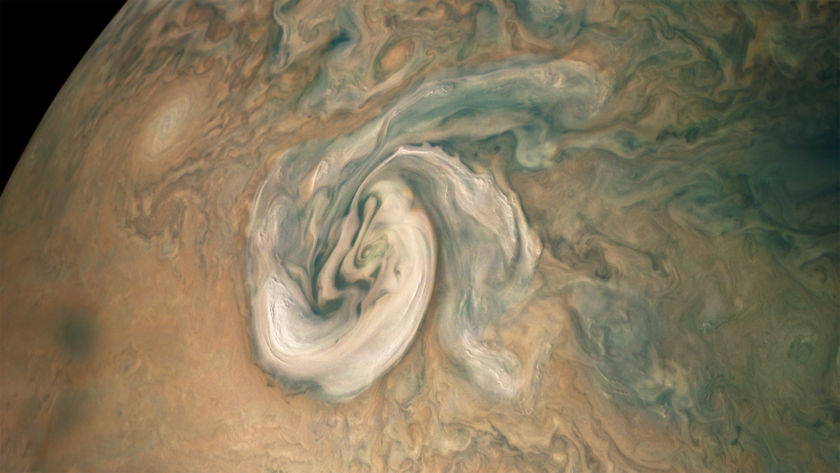 A slice of Jupiter imaged by Juno during perijove 14.

These are some really nice pictures! Is there any new fluid dynamic theories how this all works since Andrew Ingersoll last studied this planet from the Voyager days?

Thanks Jonathan! That is an awesome site! 1st rate quality stills and videos, a must see. I also like the fun bit with the astronaut on the Martian surface. That was a nice touch!

two important but not to happy questions: First, when is Junocam supposed to die? I remember reading that it wasn't supposed to last too long. Second: When is Juno going to fire it's engine and go into it's circular orbit? I know there's problems, but are they going to do it or are they just going to have the long one they've had since the beginning? Finally, has Junocam been able to spot any of the outer moons during it's apajove period?..and has it been able to get any decent pictures of Amalthea or Metis?