Parker Solar Probe, or Parker for short, will eventually swoop within an eighth of the distance between the Sun and Mercury to perform a direct survey of the corona, the Sun's outermost region. It has 4 science instruments that collect data from behind a heat shield that keeps the spacecraft operating at room temperature. The mission nominally lasts seven years, until 2025.

There’s a lot to like about Parker, and you’re going to hear a lot of fun, geeky facts leading up to launch. I’ve collected 10 of my favorites below. Enjoy! 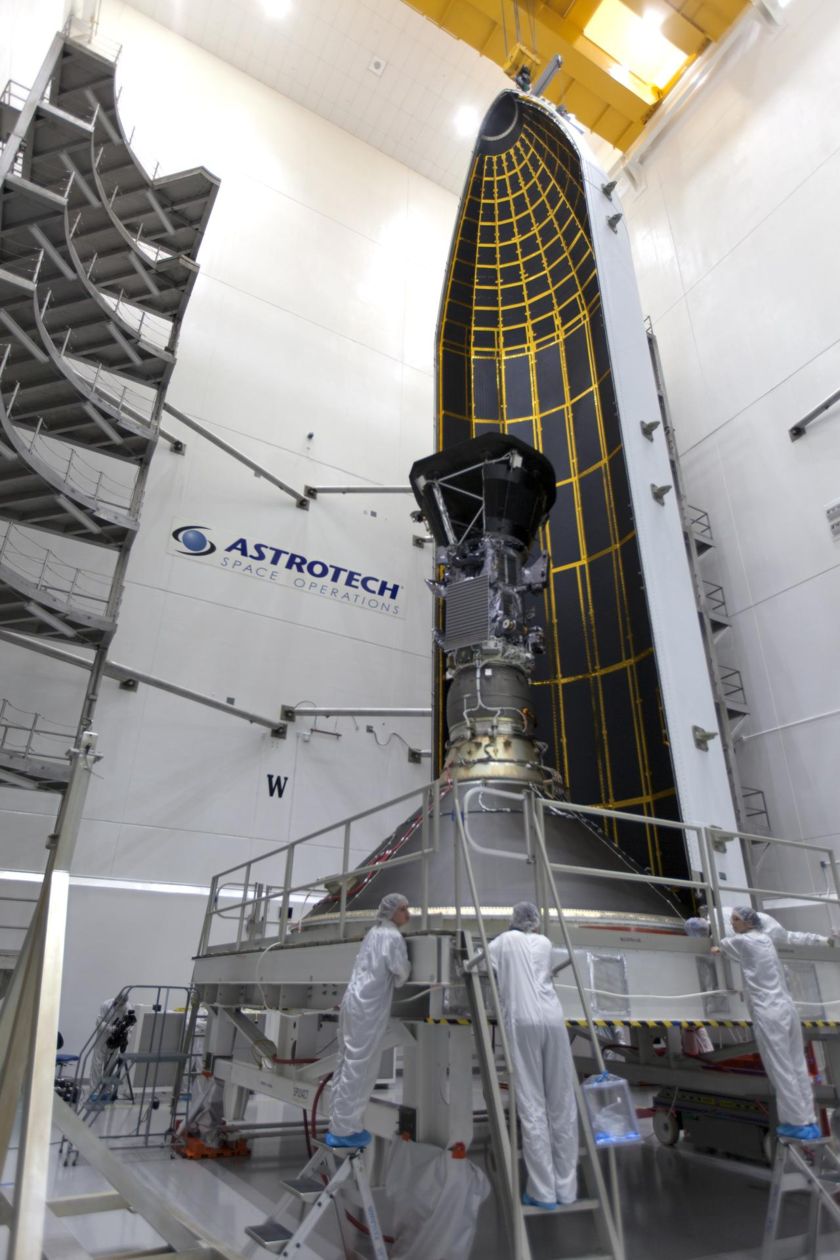 1. During close approach, the Sun will appear 25 times wider to Parker than it is from Earth.

Eric Christian, the deputy principal investigator for Parker's ISʘIS instrument, told me about a cool way you can visualize how big the Sun will look to Parker. Print out the second page of this NASA handout, and cut out the Sun. Go outside and tape the Sun up somewhere at eye level. Move 20 meters (85 feet) away. This is how big the Sun normally looks from Earth. (Don’t believe me? Get yourself a pair of eclipse glasses and look at the Sun while doing this exercise!)

Now, walk all the way up to the handout, until you can touch the Sun with your outstretched arm. This is how big it will look from Parker during close approach—about 12.5 degrees wide, if you know how to measure things in astronomical terms.

2. At close approach, the Sun will be unfathomably bright.

I also asked Christian how bright the Sun would be if I were an astronaut aboard the spacecraft. The answer: 625 times brighter than it appears from Earth.

3. Parker's ride to space, the Delta IV Heavy, sets itself on fire during launch. Which is fitting.

When the Delta IV Heavy’s three RS-68 engines start to ignite, a little bit of unburned hydrogen burps out the engine bells and floats up around the vehicle. Once the engines are lit, the exhaust whooshing down into the flame trench sucks all the surrounding air down too, and some of that extra hydrogen mixes with air and ignites, creating a fireball that chars the insulation on the boosters.

In other words, the rocket sets itself on fire. 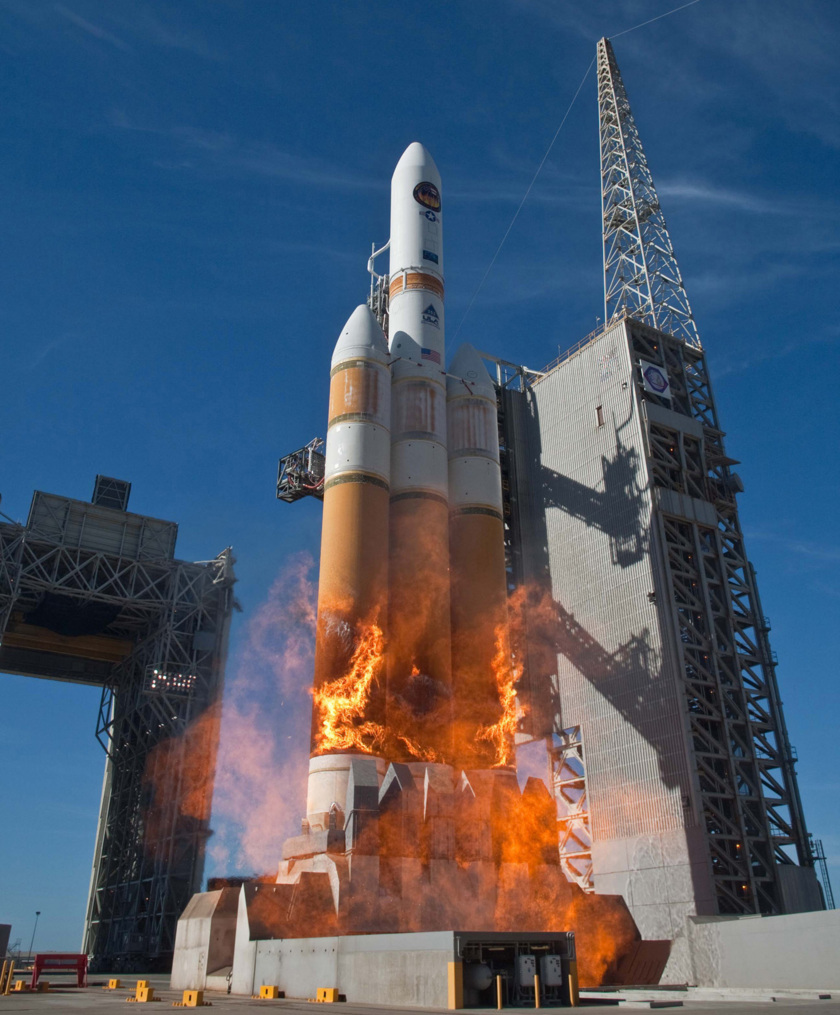 The Heavy doesn’t launch that often because it’s only used for really heavy things, like spy satellites or the test flight of NASA's Orion spacecraft, which had a mass of 21 metric tons at liftoff in 2014. Parker, by comparison, weighs just 685 kilograms, so the Heavy is instead being used to give the spacecraft a whole lot of speed relative to the Sun (more on that in a moment). The Heavy usually sort of lumbers off the pad, but it should rise a lot faster with lightweight Parker at the top.

Anyway, enjoy the show, because in a few years, the Heavy will be replaced by United Launch Alliance’s one-size-fits-all Vulcan rocket.

4. Parker is going to leave Earth in a hurry. But it won’t break New Horizons’ speed record.

Parker needs to get away from Earth fast in order to cancel out some of the planet’s orbital momentum. This will cause Parker to fall inward towards Venus, which will be used to give the spacecraft periodic pushes to keep it in its science orbit.

A good metric for how fast something leaves Earth is characteristic energy, or C3. New Horizons had a C3 of 157.75 km2/s2, and is the current record holder for a spacecraft’s speed with respect to Earth. The C3 of Parker Solar Probe is estimated to be 154 km2/s2; therefore it will not break New Horizons’ speed record.

5. Here’s Parker’s timeline of events from liftoff to separation, from United Launch Alliance. 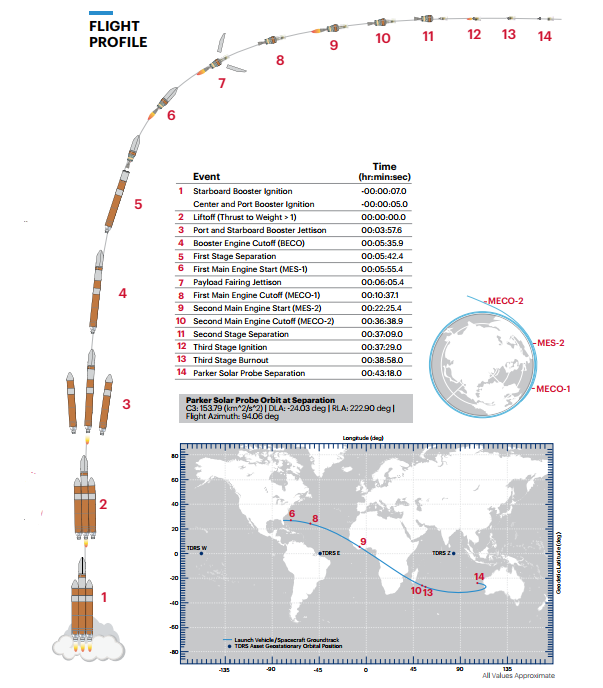 6. Parker is the first true mission to touch the Sun.

In 1974 and 1976, NASA, in partnership with Germany, launched a pair of solar probes called Helios-A and Helios-B. Helios-B flew slightly within the orbit of Mercury, getting as close as 44 million kilometers from the Sun.

Parker Solar Probe will get much, much closer—within 6.16 million kilometers, becoming the closest human-made object to the Sun. In 2014, data from NASA's STEREO probes showed the solar corona's outer boundary reaches about 8 million kilometers into space, meaning, Parker will truly "touch" the Sun.

7. Parker will become the fastest human-made object ever with respect to the Sun.

Every time I start reading about the corona, I can't get over how weird it is. First of all, there's the temperature. The Sun's surface, the photosphere, has a temperature of about 6,000 Kelvin. But some spots in the corona rise to over a million degrees! Fortunately, the temperature where Parker is flying will top out at just 1,650 Kelvin.

What the heck is going on in the corona to cause all this weirdness? That’s what Parker is going to try to figure out.

Despite the fact that Parker will by Venus seven times during the mission, I’m told there are no plans to image the planet. Parker’s main imaging instrument, WISPR, is optimized to image the corona, inner heliosphere, and solar wind. WISPR looks off-axis, next to the heat shield, to reveal what’s going on around the Sun. Here's an approximation of what it will see: 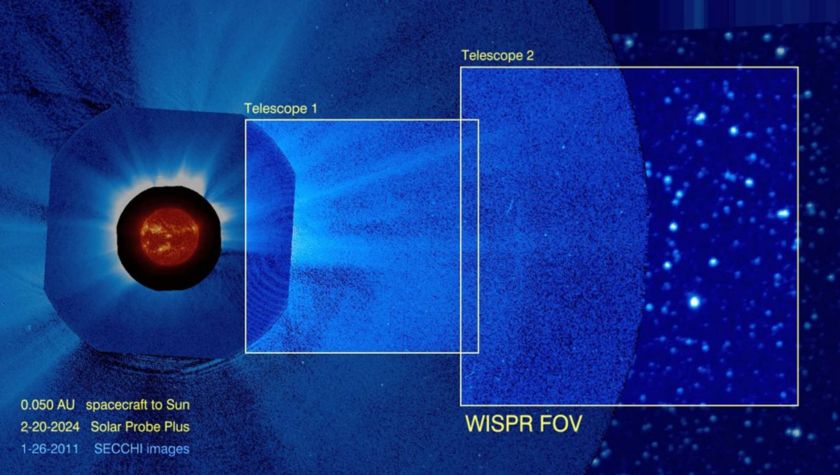 An approximation of the coronal scene from WISPR. The yellow boxes represent the WISPR fields of view at closest approach, projected onto an image that combines data from STEREO’s SECCHI HI and COR2 detectors. The spatial resolution of WISPR will be 36 arcseconds per pixel, about 4 times better than SECCHI can achieve.

By the way, I wrote about Parker’s science instruments last year. To save time, I’m hereby copying and pasting those same descriptions:

FIELDS is a set of antennas and magnetometers designed to measure electric and magnetic fields. There are 4 antennas extending out away from the heat shield, and 2 magnetometers dangling off the back of the spacecraft.

The IS☉IS experiment has the fanciest acronym. It stands for Integrated Science Investigation of the Sun, and that little circled dot is the astronomical symbol for our Sun. (The unicode symbol for this character, if you're wondering, is 2609.)

IS☉IS is bolted to the side of the spacecraft, behind the heat shield, and measures high-energy electrons, protons and heavy ions streaming from the Sun.

WISPR, the Wide-field Imager for Solar PRobe, is a set of two telescopes used to image the corona, inner heliosphere, and solar wind. The instrument is mounted behind the heat shield and uses the shield to block the Sun’s direct light.

SWEAP stands for the Solar Wind Electrons Alphas and Protons investigation. It is actually three instruments, one of which pokes out from behind the heat shield. SWEAP will count electrons, protons, and helium ions, and measure their velocities, densities, and temperatures.

10. When the mission ends, Parker will go out in style.

Like Cassini at Saturn, and Magellan at Venus, Parker will eventually become part of the object it was sent to study. The spacecraft's final orbit, seven years after launch, will carry it inside that of Venus, and it will no longer be able to use the planet for gravity assists. Linda Tran, a heliophysics writer at NASA's Goddard Space Flight Center, told me Parker will stay in that orbit indefinitely, so long as it has enough fuel to keep its heat shield pointed at the Sun.

But when the fuel is gone, Parker will start to turn, and the spacecraft’s delicate components will bear the full force of the Sun at close range.

"The spacecraft will break into larger pieces, and then smaller pieces, which will continue to orbit the Sun," Tran said. It will be a poetic end for the mission—Parker will become part of the corona itself.

I have always, like the astronomers, wondered about the inexplicable temperature perceived oddity. Maybe this mission will explain it but I think it'll just create more questions and provide new curiosity clues instead! That tends to be typical in space exploration!