The search for extraterrestrial intelligence is set to get a big signal boost, thanks to renewed interest from NASA and a private effort to scan the skies using an array of 64 radio telescopes.

Last week, NASA sponsored a workshop that overviewed current searches for technosignatures, signs of deliberate engineering beyond Earth that manifest as anything from radio transmissions to structures orbiting other stars. The workshop comes on the heels of a congressional proposal to give the agency $20 million over 2 years to help "private sector and philantrhopic organizations" search for technosignatures.

In an unrelated announcement Tuesday, the billionaire-backed group Breakthrough Listen announced they will use the the newly christened MeerKAT telescope array in South Africa to scan up to a million stars for radio signals over the next 5 years.

It's all a sign that the field of SETI, the Search for Extraterrestrial Intelligence, is gaining new momentum as astronomers discover more worlds that may that resemble our own.

"The fairly recent recognition that Earth-size habitable exoplanets are ubiquitous has sharpened the question of life in the universe in dramatic fashion," said Andrew Siemion, the director of the University of California, Berkeley SETI Research Center, and the principal investigator for Breakthrough Listen. "I think the new look at technosignatures is driven by that." 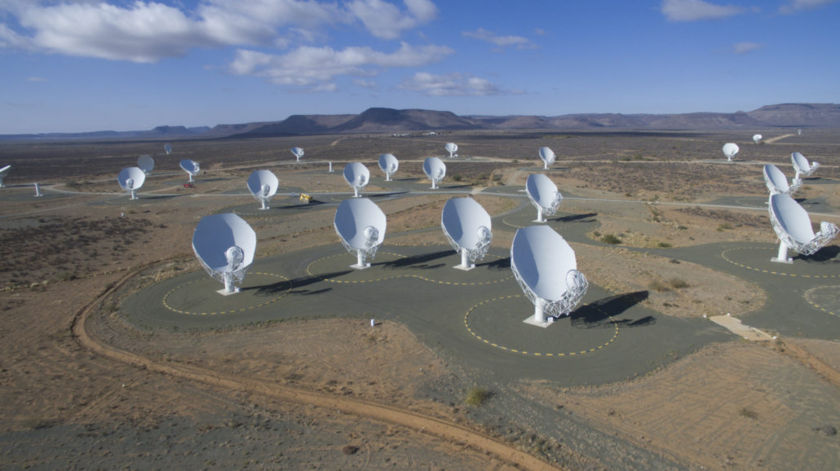 NASA hasn't formally searched for technosignatures since 1993, when a Nevada Senator axed a $60 million program he derided as "Martian hunting season at the taxpayer's expense." Since then, the agency has focused on biosignatures, which include possible microbes on other solar system bodies or Earth-like planets orbiting other stars.

As a result, the private sector picked up the technosignature baton and carried it forward via groups like the SETI Institute, Berkeley's SETI Research Center, a SETI group at Harvard University, and The Planetary Society.

More recently, Breakthrough Listen began conducting SETI searches using giant telescopes like the Green Bank Observatory in West Virginia and Parkes Observatory in Australia. Pete Worden, the executive director of Breakthrough Initiatives, said the group has surveyed about 1,000 stars thus far. With MeerKAT's 64, 13.5-meter-wide wide dishes, they expect that number to increase to about a million over the next 5 years, completing a goal to see if any nearby extraterrestrial societies have noticed Earth and are deliberately trying to get in touch.

"We really want to do a bang-up job on, 'Is anybody signaling us?' Worden said.

MeerKAT, which was built and is operated by the South African Radio Astronomy Observatory, or SARAO, is the southern hemisphere's largest radio telescope array. It was finished in July 2018, and Worden said it should be fully operational around the end of the year. Berkeley engineers are installing new technology on the dishes that allows Breakthrough to "piggbyback" and collect SETI data during traditional science observations. That technology, in turn, can also be used by other observors.

"It's a win-win situation. We're not interfering with their main observing programs," said Worden. He did not have an exact estimate on the project cost, but said it was likely in the millions.

Groups like Breakthrough may soon get support from NASA, thanks to a pair of House of Representatives bills directing the agency to spend $20 million working with private organizations on the search for technosignatures.

A 2018 NASA Authorization bill introduced in June, which has not been acted upon by the full House, was the first to include that directive from Texas Rep. Lamar Smith. Smith, who chairs the House science committee and will not seek re-election this fall, has a long-held fascination with SETI, and has held several hearings on the topic.

"I have, over the years, I think, read every single book on the subject," said Smith in an introductory video played at the NASA technosignature workshop hosted by the Lunar and Planetary Institute in Houston.

The technosignatures mandate showed up again in a House appropriations bill sponsored by Rep. John Culberson, another Texan interested in life beyond Earth. That bill passed the full House, but its Senate counterpart does not include the same language. A final, reconciled version of the bill is yet to be finalized.

Linda Billings, a consultant to NASA's astrobiology program and self-described "SETI skeptic," said she isn't sure how the science community at large feels about NASA's possible technosignatures directive. She said the SETI community itself, however, is certainly enthusiastic.

"From where I've stood, I've observed that the SETI community has been relentlessly pressing NASA to get back into the SETI game pretty much ever since Congress cancelled the program," said Billings.

To hear NASA tell it, that game never really ended.  Michael New, NASA's deputy associate administrator for research, said at the technosignatures workshop that the agency has no outright ban on proposals for SETI technology development, though NASA has, until now, preferred to leave actual searches in the hands of the private sector, citing strong progress made there.

Several scientists at the workshop objected, saying NASA has not been welcoming of SETI proposals since the early 1990s. Worden, who is the former head of NASA's Ames Research Center, agreed with that assessment.

"It was clear to me that you weren't going to get funded if [SETI] was your primary purpose," he said.

New vowed that the agency would make it clear in future proposal calls that SETI is not a taboo subject, whether or not the technosignatures legislation survives the congressional budget process.

"Regardless of what happens with the appropriations bill, that language will get fixed," he said.

Welcome back NASA. We missed you! ; )

Wonderful, fantastic. Not before time. Go for it!

Hi, I believe it is a kind of hybris thinking that we are so important. Why should an civilisation that has just thousands of years more technological experience use electromagnetic waves to contact us? They will use something more effective and really fast to cover distance in no time. Why should they use old technology? Are we trying to contact microbes? I think we will become interesting when we survive the first technological wave and their connected problems (environmental and sociological). One sign could be the dicovery of "spooky quantum communication" in our cosmos, which may require more power than one nation can cover.

Hi All, What is old to them is new or current to us. We can use what we don't have or know about. We are just starting to use laser optics. That's the best that we have. Let us say they have Star Trek subspace communication and that's all they use unless they find some primitive society at least at the laser optic level. If they find a laser optic society then they may listen to "hear" if we are rarely using laser optic and 99% RF. If they "hear" that then they may say, no contact yet. They're to primitive. On that you and I are on the same page. If someone else is out there and they are at our technological level then it makes sense to use what we have. There are plenty of yellow stage stars that may have life forms like us and at the same stage. Of course they could also still be in the stage of believing that iron boats can't float and only birds can fly. They may even say, we're not interested in space or flying like the birds and wooden sailboats are fine. Virtual is right in saying we are not all that important. Hopefully we are one of many peaceful (yet to be for us) civilizations.