Get ready for the ultimate galactic census.

The European Space Agency’s Gaia spacecraft is set to embark on a five-year mission to catalog a billion stars—yes, that's billion, with a 'b.' The two-ton probe will become one of ESA’s flagship astronomy missions, joining heavyweights like Rosetta, Herschel and BepiColumbo. Launch is currently scheduled for November 20 from French Guiana. 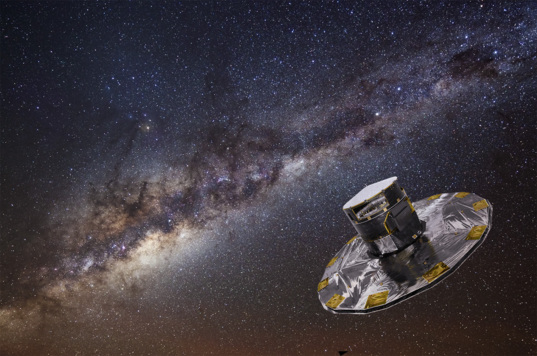 The European Space Agency's Gaia spacecraft, seen here in an artist's concept, will construct the largest, most precise three-dimensional map of our galaxy ever created.

Gaia was formerly known as GAIA, the Global Astrometric Interferometer for Astrophysics. The original design called for an interferometer, which combines the light from two or more telescopes to create a higher resolution image, while sacrificing the overall amount of light collected. Although the final design still uses two telescopes, the interferometry technique was dropped. GAIA, therefore, became plain old Gaia.

Each telescope has a rectangular slit on the side of the spacecraft's cylindrical core, which allows starlight to bounce around a system of five mirrors (ten total for both telescopes). Eventually, the light focuses on what the ESA says is the largest focal plane ever installed in a space telescope: a 0.38-square-meter charge-coupled device (CCD) capable of resolving a billion pixels.

It's gotta stay cool, though.

While not requiring the extreme chilliness found onboard infrared telescopes like the now-retired Herschel Space Observatory, Gaia still needs solid protection from the Sun's energy. After launching into space atop a Soyuz rocket, Gaia will be propelled by a Fregat upper stage onto a three-month journey to the L2 Lagrangian Point. A deployable sunshield will unfurl to protect the spacecraft's CCD and science instruments, maintaining a constant -120 degree Celsius.

The Gaia spacecraft's Deployable Sunshield Assembly (DSA) unfurls during a test on Dec. 2, 2011. The timelapse shown here speeds up the process, which takes about twenty minutes. Because the sunshield is designed to be deployed in zero gravity, support cables must be used during testing on Earth.

Three different science instruments will process the light that Gaia collects. First, there’s ASTRO, the astrometric instrument, which maps out the position of each star. Over the course of five years, ASTRO will be able to track each star’s parallax (used to calculate distance) and proper motion (the star’s two-dimensional position change from our point of view). Next, the radial velocity spectrometer, or RVS, will measure each star’s Doppler shift, which is used to determine radial velocity. Radial velocity is a measure of how fast a star is moving toward or away from us.

By combining distance, proper motion and radial velocity, scientists will be able to get each star's true space velocity; that is, its actual three-dimensional speed and direction.

The third science instrument is BP/RP, a blue/red photometric instrument. BP/RP will capture a low-resolution measurement of each star's spectra, which provides basic details like temperature, mass and chemical composition.

Gaia will slowly spin as it travels around the sun in line with the Earth, eventually capturing the entire swath of our sky. Here's a neat animation showing how that happens:

The European Space Agency's Gaia spacecraft will map a billion stars as it slowly scans the Milky Way, creating a three-dimensional map.

The result: a billion-star map, complete with true velocities and basic compositional data. Great—Now what?

The applications listed by the ESA are pretty wide-ranging. One tantalizing use of the data is assisting with the so-called dark matter problem. Dark matter is the mysterious stuff spread throughout our universe that interacts gravitationally on objects, but gives off no light. One of the keys to learning about dark matter is measuring how stars interact with it. A billion-star distance and velocity map would certainly seem to be a big help.

(To see astronomers using ground-based telescopes to do the same thing, check out my short film, “An Evening at the Top of the World.”)

Gaia is currently being processed and prepared for launch. The launch window opens November 17 and closes December 5, with launch currently scheduled for November 20.

What's mind boggling to me about this mission is that the primary objective (ESA news release) is to 3-D this section of the galaxy that they are going to map. This portion of the observations, parallax, you mentioned, is the sole key to the 3-D mapping. 1 billion pixels at a time! WOW!

I also remember reading that Gaia should be able to detect all Jupiter size planets up to 150 ly by tracking the movement of the parent star. Cold Jupiters (Jupiter size planets at the equivalent of 5 AU in the solar system) appear to be uncommon and, so, by inference, our solar system. This is not just an observational artifact. See more on the blog of astronomer Greg Laughlin : http://oklo.org/2011/02/13/an-analogy/ http://oklo.org/2012/02/19/regular-systems-of-satellites/