Today, NASA announced the first astronauts who will fly to the International Space Station from the United States since the end of the space shuttle program in 2011. Robert Behnken, Doug Hurley, Eric Boe, Chris Ferguson, and Nicole Aunapu Mann are expected to launch aboard SpaceX and Boeing-operated vehicles in 2019, providing uncrewed flight tests of both spacecraft go well first.

Behnken, Hurley, Boe and Sunita Williams have been training on SpaceX's Crew Dragon and Boeing's CST-100 Starliner since July 2015. Initially, all four crew members trained on both vehicles, but with flights just a year away, NASA is now assigning the crew to specific missions. Behnken and Hurley are scheduled to fly Crew Dragon for the first time in April 2019. Boe, Ferguson, and Nicole Aunapu Mann, a spaceflight rookie, will fly aboard Starliner sometime in mid-2019. Ferguson is the only non-NASA astronaut. He retired from NASA after commanding the final shuttle mission in 2011, and eventually joined Boeing to help develop Starliner.

Both vehicles are capable of reaching the ISS autonomously, and will do so and return to Earth before humans climb aboard. NASA says this was actually not a requirement for certifying the vehicles, but both companies opted to perform end-to-end flight tests to ensure the entire integrated system worked properly. SpaceX says their test flight will happen this November, while Boeing is now targeting late 2018 or early 2019. Boeing's dates recently slipped after a problem during a test of the Starliner's abort system engines in June. The engines fired successfully, but several valves failed to close, allowing toxic propellant to leak from the engine. Many spacecraft, including Crew Dragon and Starliner, use hypergolic propellant for abort engines because it ignites on contact and is a good choice for quickly blasting a crew capsule away from a failing rocket. But that same propellant can be deadly to humans if not stored carefully. Boeing believes they know what caused the problem and a fix is in the works. 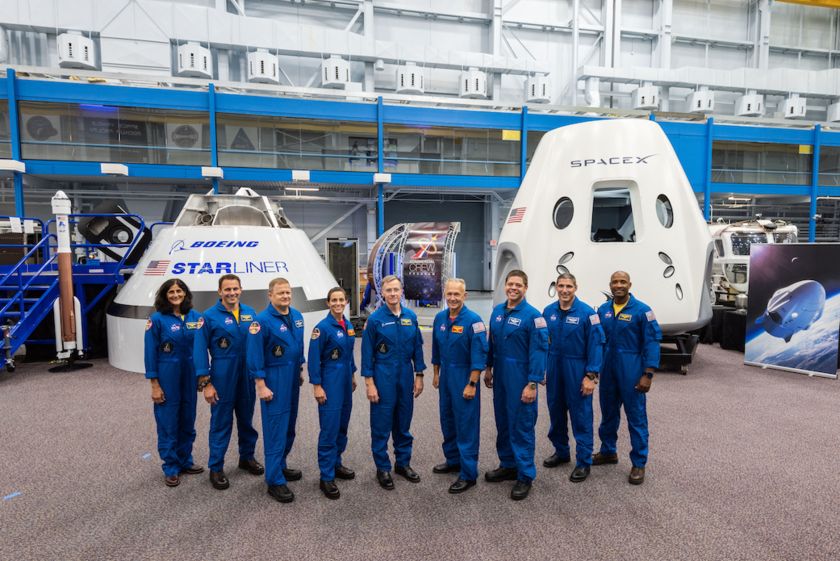 The return of crew flights to U.S. soil will end NASA's politically inconvenient reliance on Russia for transporting astronauts to the ISS. The space agency's current arrangement with Russia for Soyuz seats is set to run out in January 2020, a date that has already been stretched by extending upcoming ISS expeditions beyond six months. Purchasing additional seats on the fly is apparently not an option because of the lead time it takes to construct new Soyuz capsules. Therefore, it's essential that Crew Dragon and Starliner be ready for operational flights by the 2020 deadline.

Four of the five astronauts named to the first Crew Dragon and Starliner flights are spaceflight veterans. Behnken, Boe and Hurley have each flown two shuttle missions, logging four weeks in space apiece. Ferguson, the Boeing astronaut, flew three shuttle missions, and has logged more than 40 days in space. Nicole Aunapu Mann will be making her first flight; she completed her astronaut training in 2015.

Once Crew Dragon and Starliner are certified by NASA for regular use, they will be used for operational ISS flights around 2020. NASA also named today the astronauts for those flights: Victor Glover and Mike Hopkins will fly aboard the first operational Crew Dragon, while John Cassada and Sunita Williams will fly aboard the first operational Starliner. A NASA press release says more crew members may be added to those flights later.

Glover and Cassada are spaceflight rookies. Hopkins was a member of Expedition 37 and 38 in 2013 and 2014. Williams has the most diverse space background of the astronauts named today, having flown on both the shuttle and Soyuz and served aboard the International Space Station for two long-duration expeditions in 2006 through 2007 and 2012. She has logged 322 days in space.

It's been a long journey for NASA and its commercial partners to get both crew capsules up and running. NASA picked Crew Dragon and Starliner to replace the space shuttle for ISS transportation back in 2014. At the time, test flights were expected to be just around the corner, and the agency pledged to be rid of Russian reliance in 2017. But both partners have suffered delays that will end up totaling at least three years. The first Crew Dragon arrived in Florida back in July for final processing, and NASA said the Falcon 9 that will be used for the uncrewed test flight will ship to Texas for testing in August. Similarly, the first Starliner is being currently being outfitted for launch at Kennedy Space Center, and the test flight's Atlas V Centaur upper stage—never flown in the dual-engine configuration—ships to Florida in August.

NASA seems confident these dates will hold, and that the commercial crew program is finally on the home stretch. However, at least one source already disagrees. In any case, SpaceX is now the presumed leader of the race to capture the flag left on the station by the final space shuttle crew—a flag that has been waiting to return to Earth for eight years and counting.

CONGRATULATIONS to all assigned to those first flights! Fly your best and enjoy the ride!

Looks like SpaceX is on track to retrieve the flag left behind in 2011, then...

This is all very nice, but shouldn't this have happened YEARS ago? Even as late as last spring, the Crew Dragon was supposed to have had it's unmanned test flight last April or something like that. The crews were, as were mentioned, made public YEARS ago. I have the trading card somewhere. NASA knew a decade ago that the shuttle needed a replacement, so why did they dally so? This shows incompetence on all sides.

Hi Messy! Per your question, sure these new vehicle flights will slip on launch times since the vehicle designs are new and untested. The slip reasons are usually due to design components or materials not working collectively as the designers intended thus changes need to be made. Other issues can be flight characteristics that don't meet needed standards though they did on paper and in software programs. Correcting these issues takes time to do. Unlike car manufacturers, aerospace companies do not rush out vehicles like car companies, with known defects. So it takes time. Sometimes defects escape detection until years into a flight and unfortunately get found when an accident happens. Acceptable risks in space flight.

Hi Messy.... continued... for the time delay in getting an Orbiter replacement vehicle has two major reasons for a delay. 1) Those who wanted to keep the Orbiter 2) design of a new vehicle. Yup. It's that simple. Of course all of the issues with both points come into play with many, many subparts. Item one was the biggest stumbling block to stopping the Orbiter project and getting a replacement vehicle design decided upon, then to actually start designing it. I hope this helps.