Before we begin, a brief note: this column needs your help! The Funpost! has evolved into a place where I trawl through the space community's id and write about silly stuff that doesn't fit in with, well, SERIOUS journalism. I'd also love to include reader questions, comments, and any other interesting things you find out there on the Internet. Maybe you saw a picture that would benefit from a quick backgrounder. Or maybe you have a take on which space company CEO would win an arm wrestling contest. That's all potential Funpost! material! Send your thoughts my way via email, or you can even DM me on Twitter.

This past weekend was Memorial Day here in the U.S., and if you were an adult aged 21 years or more, you may have celebrated by consuming a few alcoholic beverages. My family usually visits this time of year, and my Dad, who in retirement has been expanding his culinary range, bought a six-pack of Elysian Brewing Company's Space Dust IPA. Naturally, this got me thinking: Just how many space-themed beers are on the market, anyway? To answer this question, we went to my local liquor store, and in just a few minutes were able to procure six spacey brews.

But were they any good?

This could mean only one thing: time for a Funpost! SPACE BEER FACE-OFF. Behold, the contenders: 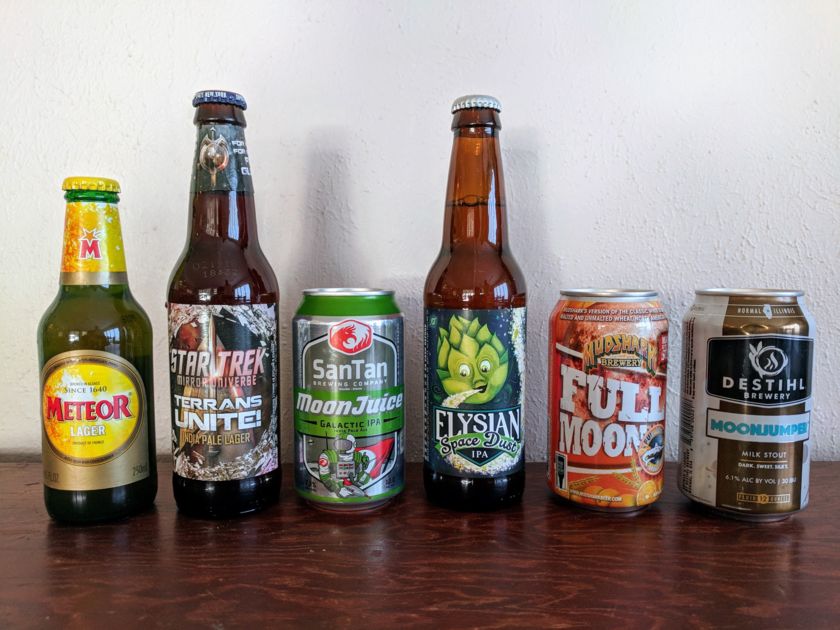 We decided to start the face-off with a light-drinking lager and work our way up to a milk stout. We took notes as we went, and as a bonus, my Dad made a certified DAD JOKE for each selection. Here we go!

Please don't drink unless you're 21, and please do so responsibly.

This French brewery has apparently been in business since 1640. Unfortunately, this lager looked like it had been sitting on the shelf for at least half that long. It had a lot of sediment floating in it, which can be a natural result of the craft brewing process OR an indication that you've got a skunky beer on your hands. We were already primed not to like it, and that's exactly what happened. The Meteor was very light, with a ghost-like taste—there one minute, and gone the next. Not a great start to the face-off.

Dad says: "That meteor is on its final burn."

Shmaltz has been releasing these Star Trek-themed beers for at least a couple years. The owner of my local liquor store is a huge Star Trek fan (as in, there are random figurines on the shelves and sun-faded cast pictures on the walls), so not surprisingly, these Trek beers are often available. The Mirror Universe Terrans Unite! is a cleverly-named IPL (see, it's like an IPA, only not) that unfortunately falls a little flat. It's hoppy, with that crisp refreshing feel you'd expect from a lager, but overall a fairly one-note beer, and a little bitter for my taste.

Dad says: "A good light taste, but I think it falls short of exploring the whole universe."

Ringer alert! San Tan is located in nearby Chandler, Arizona, so this is a local choice that frequently shows up in Tucson restaurants. Fun fact: Orbital ATK has a plant in Chandler, and do you know what the company is doing there? Building the new Omega (no capital A) rocket, that's what. Anyway, MoonJuice is a pleasant, balanced IPA that's fruity without making a big deal about it. Two thumbs up from your intrepid reviewers.

Dad says: "Right on target with the Moon. I think the Apollo astronauts would have been proud."

This is the aforementioned beer that started the Funpost! challenge. It's a very dank and hoppy IPA; bold but not TOO bold. For some reason it makes my tongue tingle a little bit, which might be due to the high alcohol percentage. Enjoy this one in moderation.

Dad says: "Makes me feel like I'm about to lift off to gather more space dust."

I'm hit or miss on wheat beers; especially ones where fruit is a key component. However, the Full Moon was a pleasant surprise! It's smooth and easy to drink, with a perfect, full-bodied, orange taste, making for a great summer brew that pulls no punches. This one's also made in Arizona: in Lake Havasau City, across the Colorado River from California.

Dad says: "Too bad the full Moon only occurs once a month."

Stouts are a seasonal thing for me; I can drink them in October through December, and even then, I prefer them on the nutty, malty side. The Moonjumper is milky and chocolatey as advertised, but not too sweet, which I liked. Also, the cow in the astronaut helmet makes this the best can design of all the contenders.

Dad says: "If I liked stout beers, I would jump over the Moon for more."

So which space beer prevailed?

After careful consideration, it was unanimous: We're giving the crown to the Full Moon Orange Wheat by Mudshark Brewery. We were both surprised by how much this beer won us over, with its summer shandy-like attitude backed by a full-body taste. We definitely recommend you find your own tranquility base by bringing some along on your summer outings.

Monkeynaut! You can find it all over the Huntsville area. http://drinkallthebeers.com/wp-content/uploads/2013/10/Monkeynaut1.jpg

Fun post indeed! Another great space-themed beer with an unusual backstory is Ninkasi Ground Control. Here in AZ I could only find this in limited quantities at an import store. It was a fantastic Stout well worth the extra effort and nifty collectors box.