Update: after a two-day delay to fix a guidance problem on the Falcon 9 rocket, TESS launched on Wednesday, April 18.

TESS, NASA's Transiting Exoplanet Survey Satellite, is scheduled to launch from Florida next week to begin a two-year search for Earth-like planets around other stars. Liftoff is currently planned for April 16 at 6:32 p.m. EDT (22:32 UTC).

TESS is a cool mission! I didn't need to be convinced, really—you had me at "exoplanet survey"—but in pulling together this article, I got a much better appreciation for how clever TESS is, and how it will add some nice depth to what we already know about exoplanets.

Let's dive in! Here are the top eight interesting things I learned about the mission. 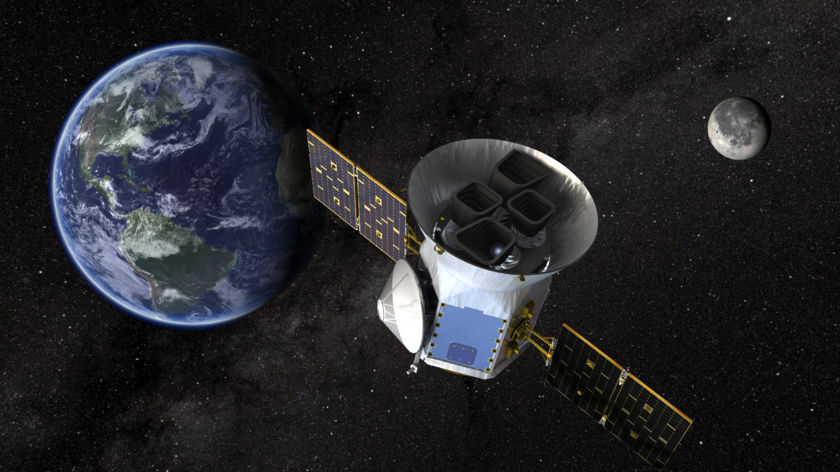 1) Kepler looked through a soda straw; TESS will survey 90 percent of the sky

Kepler stared at a single patch of sky during its prime mission, and a few more patches during the rebooted K2 mission. That was great for giving us a statistical idea of just how many exoplanets there are (probably more in our galaxy than stars), but most of the worlds Kepler found were between 300 and 3,000 light years away, making them tough targets for follow up observations. TESS trades in Kepler's higher resolution for a bigger viewing area, which shifts the search to brighter, closer stars. Most of the exoplanets TESS finds will be just 30 to 300 light years away.

As its name suggests, TESS hunts for exoplanets using the transit method, watching for dips in stars' brightnesses when planets pass in front of them. It will be able to find a lot of small planets and determine their sizes; an early prediction is that it will discover 50 new Earth-sized planets and as many as 500 planets smaller than twice the size of Earth. Ground-based telescopes (and the James Webb Space Telescope, whenever it finally launches) will be able to follow up on these discoveries to determine masses, densities and atmospheric compositions.

TESS has four wide-field cameras that cover 24 square degrees of sky each. That's big! The constellation Orion can fit in one 24-square-degree patch. The four cameras are staggered in a way that, when combined, they cover a rectangular patch of sky 24 degrees wide and 96 degrees long. 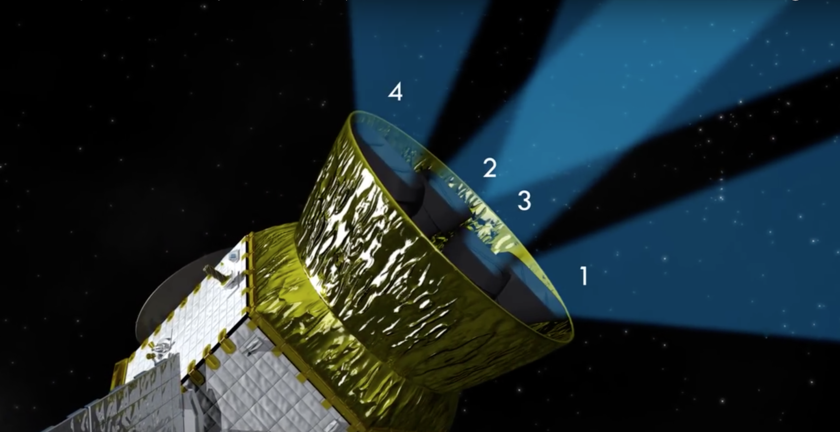 If you imagine the night sky as a sphere around our solar system, and you slice that sphere in half on the ecliptic, there are 90 degrees of sky between the ecliptic and each pole. So it's not a coincidence that TESS's four cameras cover a patch of sky roughly 90 degrees long. One observation slice goes roughly ecliptic-to-pole, and TESS will divvy up the sky into 26 different slices, like this: 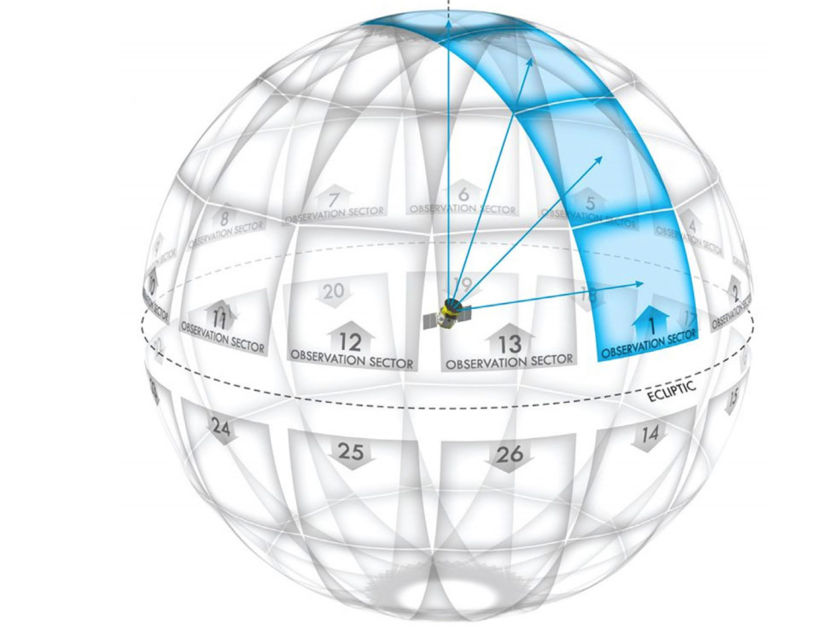 TESS will be in Earth orbit (more on that later), and it needs to keep its cameras pointed away from the Sun when making observations. Therefore, it will basically stare at the section of sky opposite the Sun as it sweeps out a one-year solar orbit with Earth. This is actually very similar to how scientists will operate JWST out at the L2 LaGrange point; they can't look near the Sun, so potential observation targets can only be imaged when they are more or less opposite the Sun.

But, there's an exception: the continuous viewing zone!

You'll notice in the above diagram that TESS will miss a little bit of sky near the ecliptic, but get a lot of overlap near the poles. That's intentional. Each observation slice only gets 27 days of coverage, but at the poles, there will be near-continuous viewing. This means we'll be more likely to find planets there, and since JWST can also continuously see the poles, it can more easily follow up discoveries in that part of the sky. That's some nicely planned astronomy mission synergy!

Speaking of mission synergy, this is a good time to mention TESS is an astrophysics explorer mission. These are small- and medium-class missions that aren't full-fledged flagships (like JWST). TESS is a medium-class explorer with a cost cap of $200 million, not including launch costs—which turned out to be $87 million in this case. (This is where I deploy my standard reminder that when SpaceX says the base price of a Falcon 9 is $62 million, that doesn't necessarily include things like payload processing, integration, and mission assurance. It's still a good deal, though!) Explorer missions are led by one principal investigator, and the PI for TESS is MIT's George Ricker.

Just because I pretend to be a knowledgeable photographer, I'm always interested in nerdy spacecraft camera details. (Cut to scene of me photographing my daughter and telling her to hold still while I fiddle with exposure settings, at which point she loses interest and walks away.) TESS's cameras continually take images with exposure times of 2 seconds each. Instead of sending all those images back to Earth, the spacecraft does some nifty onboard processing to create two types of data products: postage stamps and full frame images.

For the postage stamps, every 2 minutes, the spacecraft stacks 60 of those 2-second exposures to create a single image. Then, it cuts out "postage stamps" around certain stars, based on a predetermined catalog of 200,000 interesting stars. Those postage stamps are compressed and sent back to Earth.

If that's confusing, try this diagram: 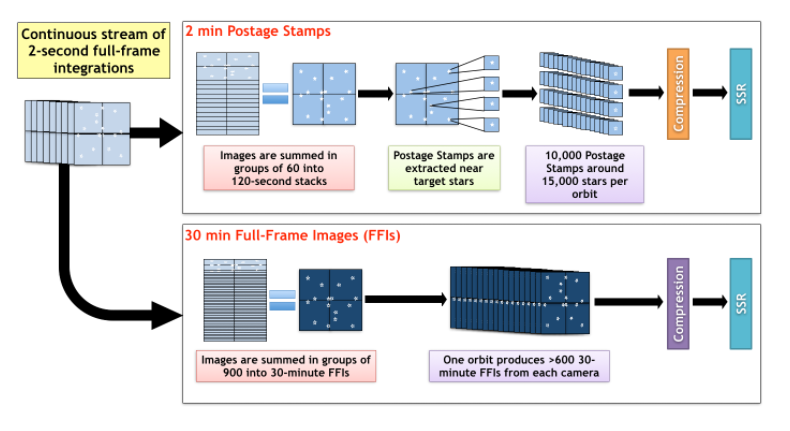 I asked the TESS folks how these two-minute postage stamps and 30-minute full frame images correspond to typical transit times. Thomas Barclay, the deputy director at the TESS Science Support Center, said the range of transit times observed by TESS are between 40 minutes and eight hours, with a typical duration of three hours. The team expects to detect several thousand planets in the two-minute postage stamp data, with one to three transits observed by TESS at any given time.

Here's an actual TESS starfield image, courtesy of an engineering camera the team took outside to try out under the night sky!

The @NASA_TESS instrument team took this picture using an engineering unit (not flight) #TESS camera of the night sky. There are #exoplanets out there that TESS, @NASA's next exoplanet hunter, will find when launched next month! #WhenILookThroughMyTelescope pic.twitter.com/nKUHQYVsSr

TESS has an unusual Earth orbit designed to minimize the amount of time its view of the sky is ever obstructed by Earth or the Moon. NASA says this orbit has never been used!

This will put TESS in a 2:1 resonance with the Moon; basically, for every one Moon orbit, TESS makes two orbits. The spacecraft will nominally be collecting data at all times, pausing only during close approaches to Earth so it can beam its precious data home via the Deep Space Network. It takes two 13.7-day orbits to complete one 27-day observation slice.

So how will TESS get to that wacky science orbit?

It all starts with a launch atop a Falcon 9 rocket from Cape Canaveral. Initially, TESS would have been strapped to an extra upper-stage solid rocket booster, but now, the plan calls for SpaceX to directly inject the spacecraft into a 200-by-270,000 kilometer orbit. Over the course of three phasing orbits, TESS will make at least five burns, raising its apogee out near the Moon and setting up a lunar flyby that will nudge the spacecraft into its final science orbit.

At last check, TESS was at Kennedy Space Center's Payload Hazardous Servicing Facility, getting its thrusters fueled up for flight:

Yesterday, @NASA_TESS had its protective lens covers over the #TESS cameras removed for inspection before the spacecraft is fueled. pic.twitter.com/eUDOi7Xm3C

Before leaving on a long trip, you should have a full tank of gas! @NASA_TESS completed fueling this week @NASAKennedy as part of preparations for launch. Fuel used on #TESS is hydrazine, which is extremely toxic to humans. pic.twitter.com/Uy7svyzbnh

Viewed launch from my balcony in Maitland, Fla. (just north of Orlando). It was beautiful!