NASA has a Moon landing plan—sort of

As I continue parsing the White House’s new NASA budget proposal, I’m realizing just how much the Trump administration hopes to spend over the next five years on new human spaceflight programs. I recently wrote about the commercial LEO development program, which will nurture a private replacement for the ISS, and the Lunar Orbital Platform-Gateway, a miniature space station near the Moon. There are also two more programs, both of which focus on humans exploring the lunar surface, that I’ll cover in this article.

To emphasize: this is all new stuff. By my count, the White House proposes to spend $990 million on new human spaceflight programs in 2019, and $5.7 billion over five years. That’s a lot! If you’ve been clamoring for NASA to make a larger shift toward commercial partners and the Moon, this budget is for you—providing Congress goes along with the plan, and the White House follows through in later budgets.

The last time NASA tried to go back to the Moon was during the Constellation program, using an approach that then-NASA administrator Michael Griffin called "Apollo on steroids." Constellation envisioned a large lander called Altair that conceptually resembled the Apollo lunar module. Altair was being developed using traditional NASA contracting models; Northrop Grumman and Johnson Space Center were leading the effort, but Constellation was cancelled before Altair got very far along.

With this new budget proposal, NASA isn’t exactly going full Altair—at least, not yet. Instead, the agency envisions a gradual, stepped approach, where human spaceflight, planetary science, and commercial partners all work together. Like the Obama-era "Journey to Mars" campaign, the details are vague. There’s an overall strategy in place, but if you want to know the date when astronauts will be back on the Moon, and what type of lander they’ll use, you’re out of luck.

NASA wants to start by helping commercial partners develop and test cheap lunar landing technologies. There are several companies already trying to do this; examples include Moon Express, which was among the groups competing for the Google Lunar X-Prize (the prize will go unclaimed), and Blue Origin, which is promoting its Blue Moon cargo delivery service. NASA would start by funding "risk reduction" studies before awarding contracts for a demo lander in 2019.

Some payload capabilities mentioned for these early landers are 200 and 500 kilograms. As far as I can tell, this is on top of the mass of the lander itself, meaning one of these commercial landers could deploy a rover like Opportunity (185 kilograms). With cheap, reliable surface access, NASA can scout potential astronaut landing sites and deploy in-situ resource utilization experiments, testing to see how easily we can extract oxygen from the lunar soil and use it for things like propellant and water. 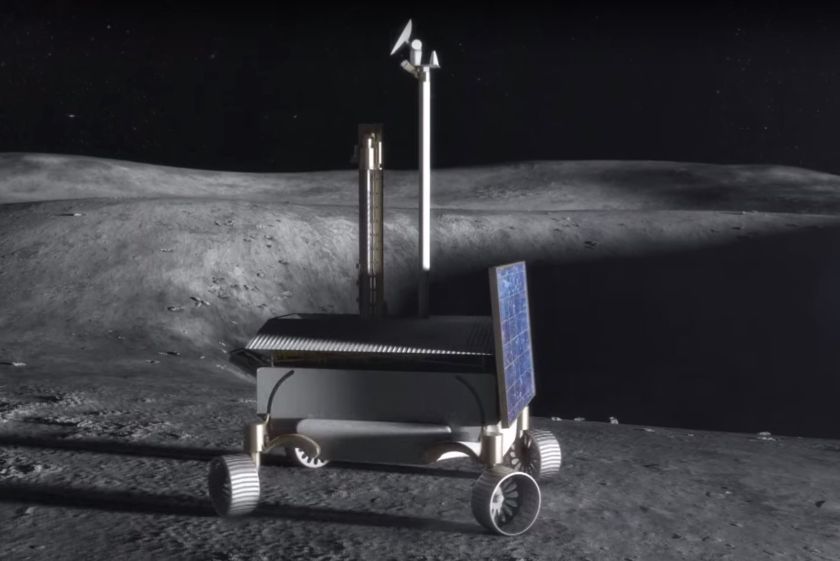 From there, work shifts to helping commercial partners scale up the landing technologies to 5,000 or 6,000-kilogram payloads. Assuming once again that this mass capability is in addition to the lander itself, that’s beefy enough to put a crew on the surface; the fully fueled Apollo ascent stage rang in at about 4,800 kilograms. Supplemental cargo flights could deliver human habitats, rovers, and supplies.

Some commercial advocates believe all this will open up a new lunar surface industry. Maybe! The budget specifically says NASA will work with commercial partners to find "opportunities … that would be enabled through regular access to the lunar surface." A lot of forward-thinking folks envision propellant depots, Moon villages, and helium-3 mining, but for now, a new lunar surface industry will exist almost entirely to serve NASA and its potential international partners. The result could be similar to how NASA’s current commercial programs created a new orbital transportation service, which currently only supplies the International Space Station. (There are, of course, ancillary benefits; SpaceX used its NASA revenue to start a revolution in affordable spaceflight.)

What about science? During the Apollo program, science was never the primary goal, and it won’t be the main reason we go to the Moon this time, either. But, as it was during Apollo, there are a lot of potential science benefits—providing they aren’t offset by significant funding shifts from other science programs. (The WFIRST space telescope could be an early casualty of the White House’s shift in priorities to human spaceflight.)

During the first phase of NASA’s return to the lunar surface—tentatively scheduled for the first half of the 2020s—the agency’s planetary science division will be tasked with adding scientific instruments to landers and rovers, using funds from the above-mentioned Lunar Discovery and Exploration program. There’s one line in the budget I find particularly intriguing:

"These payloads and services will address the nation’s lunar exploration, science, and technology demonstration goals, many of which are outlined in the [past two Decadal Surveys]."

The biggest Moon science priority in the past two Decadal Surveys was a sample return from the south pole. The mission is a candidate for NASA’s competitively selected, New Frontiers program, but it keeps losing out to other destinations (most recently, in December, when NASA picked missions to Titan and comet 67P as finalists).

The lunar south pole is also an interesting place for human exploration because water ice may exist in the Moon’s permanently shadowed craters. And at some point, NASA is going to start testing ascent and Earth-return technologies. That makes a south pole sample return mission a great intersection of planetary science and human exploration goals. I predict NASA will eventually do it, outside of the New Frontiers selection process, possibly under the Lunar Discovery and Exploration program. You heard that hot take here first!

I could be wrong (What? Never!). But my colleague, Emily Lakdawalla, noted that during last week's Outer Planets Working Group meeting, the topic of radioisotope power systems came up, and NASA officials mentioned one could be used for a future south pole mission, since you can't rely on solar power inside those permanently shadowed craters. We'll see!

Blue Moon lander on the SLS. Wet workshops. That is what will work and not much else.

Oops. Trump mussed the target. Clue... it is red, not black and white. Well as long as we start leaving the planet with astronauts it can't be all bad. I just prefer Mars first since we can do it now. At my age now it is very safe to say that I won't see that dream of mine come true unless Elon makes it happen with Zuprins' Mars Society plan.

"Emily Lakdawalla, noted...NASA officials mentioned one (RTG) could be used for a future south pole mission..." What -exactly- does this mean? Of course an RTG COULD be used, it's obviously preferred, perhaps even vital, for useful science return from a south pole lander, so is Emily saying some existing Pu in the inventory will be reserved for a lunar mission?

I just have a simple question about NASA's manned spaceflight plans: Take a space shuttle external tank, some space shuttle main engines, and some space shuttle SRB's ... why should it take 15 years to put these pieces together? Call it Ares IV, call it SLS, call it whatever you will. I call it depressing. Half a century ago, there were dozens of launches in between the speech at Rice University and the reply from Tranquility Base. With the current crop, the plan is to test SLS at the very end of 2019 (which means: 2020), and then do the next test a few years (!) later. Even taking 2010 as the start date, it takes 10 years for a test launch? Then a few more years for a second test launch? Since someone will point to the budget, I'll agree that's equally frustrating. Take the 1960's NASA annual budget, adjust it for inflation, and it's 75% of NASA's current budget. That's right, the budget excuse doesn't hold water: NASA currently gets an amount not much less than they did during Apollo. If 1.3x the current money bought lunar landings 50 years ago, why is 1x the money so ineffective at that goal now? It's like they're not even trying.

"Take the 1960's NASA annual budget, adjust it for inflation, and it's 75% of NASA's current budget. That's right, the budget excuse doesn't hold water: NASA currently gets an amount not much less than they did during Apollo." NASA is spending about 2 billion a year on the Space Launch System and it spent about 30 billion a year on Apollo. Not 75%........about 7% by my math. I would say they are not doing bad at all.

"I just prefer Mars first since we can do it now." There is that little problem called the heavy nuclei component of galactic cosmic radiation. And also what zero gravity does to the human body over extended periods. Nobody is going to sign off on profoundly dosing and debilitating astronauts on a Mars mission. We cannot "do it now" without first accepting what it will take to shield space travelers from cosmic rays and provide Earth gravity. According to Eugene Parker it will require about 400 tons to shield a small capsule. For any practical living space well over a kiloton. And then you have to spin it with a tether system to provide artificial gravity. The only practical system to push several thousand tons around the solar system is Nuclear Pulse Propulsion (atomic bombs). If you accept going to the Moon to acquire water-as-shielding and assembling, testing, and launching such nuclear missions we might do it in ten years.

"-so is Emily saying some existing Pu in the inventory will be reserved for a lunar mission?" Why do people rewrite sentences unless they are attempting to change the meaning to something different than the original? The original complete statement is quite clear: "But my colleague, Emily Lakdawalla, noted that during last week's Outer Planets Working Group meeting, the topic of radioisotope power systems came up, and NASA officials mentioned one could be used for a future south pole mission, since you can't rely on solar power inside those permanently shadowed craters." The meaning is plain that a radioisotope power system of one kind or another could be used to generate power in the shadowed craters. Which means Emily is not saying anything about PU being reserved.

"If 1.3x the current money bought lunar landings 50 years ago, why is 1x the money so ineffective at that goal now?" While I don't have the budget data now to check your math, we should recognize that NASA right now has considerably more operations to support than during the 1960s: Mars rovers and supporting orbiters, the Voyager probes, New Horizons, the Deep Space Network, the ISS, SOPHIA, etc etc etc.

"'m not *rewriting* anything! Emily's statement that NASA officials mentioned an RTG "could be used" is vague here." Not vague at all. You are trying to rewrite the statement given with an inference that somehow because your comment was not magically known and answered beforehand by Emily and Jason that it is...."vague". What an RTG is....is pretty well known. That it could be used as a power source in dark lunar craters is also no mystery. That is all there is to it. Why keep inferring there is more? If you have questions about plutonium availability then don't task Emily with your failure to find answers.