Some snark (and details!) about NASA's proposed lunar space station

Remember NASA's Deep Space Gateway? The proposed miniature space station in lunar orbit that will serve as a training ground for deep space, and a waypoint for surface missions? Our next big step for the human exploration of the solar system? The project I wrote a big piece on last year, titled NASA unveiled new plans for getting humans to Mars, and hardly anyone noticed?

When I asked NASA headquarters why the name changed, a representative said they chose Lunar Orbital Platform-Gateway because it's more descriptive, and that they're still planning on coming up with a better name.

If you don't quite buy that explanation, I suggest looking back to the last presidential transition, when the Obama administration cancelled Constellation. Orion and Ares V went away, and after more than a year and a half of political wrangling, we ended up with… the Orion Multi-Purpose Crew Vehicle, and the Space Launch System. I posit the DSG-to-LOP-G name change is similarly motivated by politics: "No, this is totally not the same thing we proposed during the Obama administration! That was the Deep Space Gateway! This (waves hands like a magician) is the Lunar Orbital Platform-Gateway!"

I saw a lot of fun snark about the name on Twitter. Can we at least just admit neither name is that exciting? Not every name has to describe exactly what the thing is! Look at some other aerospace examples: Falcon. Atlas. Tiangong. Delta. Ariane. Skylab. Dragon. Orion, even! The general public probably doesn't know what those words mean at first glance either, but is "Deep Space Gateway" or "Lunar Orbital Platform-Gateway" any more helpful? If you want government funds for this stuff, you need to sell it! "What's going on in space these days?" I picture a friend asking. "Well, get this, we're building a gosh-darned MoonGate!" I would love to reply. 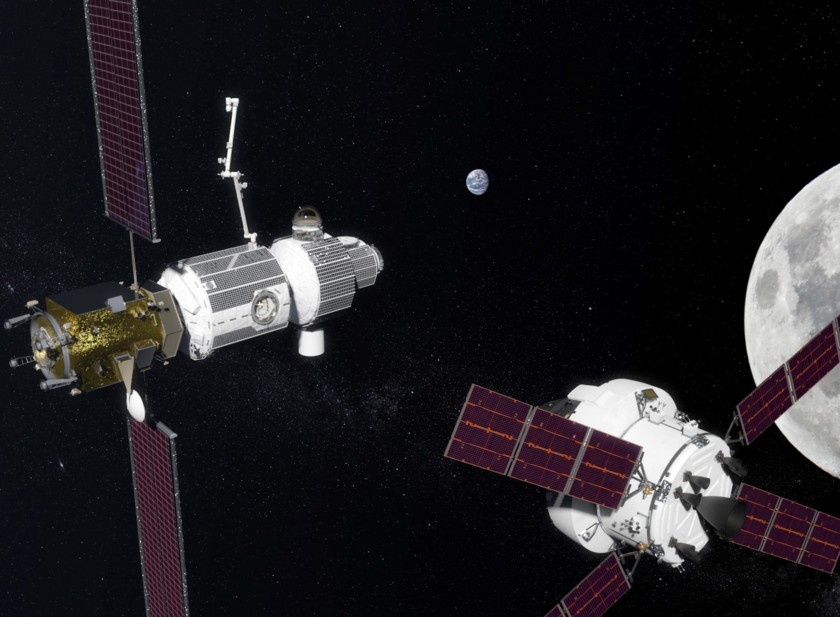 Name change aside, there are also some significant LOP-G updates in this budget. First of all, LOP-G has its own line item, with $504 million proposed for 2019 and $2.7 billion total penciled in over the next five years. That means LOP-G is officially happening, and it would take Congressional intervention to stop the program at this point.

There’s also some information about LOP-G components, launch dates, and operation plans. Recall that sizewise, LOP-G is a far cry from the ISS. The working design calls for a power and propulsion element (PPE), a habitation element, a logistics element, and an airlock. Some proposed add-ons also include a robotic arm and fancy glass cupola. (Side note: since the LOP-G will probably be positioned in a near-rectilinear halo orbit, a glass cupola would offer incredible, sweeping views of the Moon and Earth together. NASA, I urge you to make that happen!) The PPE isn’t habitable, so astronauts will be confined to just two modules, a visiting Orion spacecraft, and an airlock. The longest crews would stay at the LOP-G in this configuration is a month; NASA might increase that duration if more pieces are added later.

The PPE will be launched first. It uses solar electric propulsion, and incorporates a lot of the technologies NASA was working on for the now-defunct Asteroid Redirect Mission. SEP engines provide low thrust over very long periods of time, and require very little propellant, making them ideal for transitioning LOP-G between various orbits to support different types of missions. The SEP system is expected to be around an order of magnitude more powerful than the ones used on missions like Dawn. Humans-to-Mars transportation systems may need to be yet another order of magnitude more powerful, so the PPE provides a good intermediate testing platform.

NASA plans to award the PPE contract by the end of this fiscal year (September 30), and launch it in 2022. By NASA standards, for a human spaceflight vehicle, that's soon! And there’s another twist: Instead of launching the PPE on SLS with the first crewed Orion capsule, NASA will use a commercial launch vehicle.

At first, I took that as a shot across the bow of SLS. The whole point of SLS is, after all, deep space exploration. If the PPE is small and light enough to fit on a commercial launch vehicle, why can't NASA do the same for the other LOP-G components? Then, after more research and some helpful conversations on Twitter, I realized that the reason the LOP-G components are launching on SLS with Orion is so that Orion's thrusters can be used to insert them into the correct lunar orbit. The PPE is an exception because it has its own propulsion system, but the other modules can’t just be lobbed solo at the Moon with a rocket like Falcon Heavy. The modules need a way to slow down when they get to the Moon, and rocket stages that use cryogenic propulsion won’t work because the propellant won’t stay stable during a multi-day coast to the Moon. (That’s why United Launch Alliance is working on a new upper stage technology called ACES to keep cryogenic propellants stable for longer.)

After the PPE, the next LOP-G component launched would be the habitat element. Through a program called NextSTEP, six companies are already developing ground prototypes for future deep space habitats. Those prototypes will help NASA decide on a final design for the actual hab element, with a contract for that to be awarded in fiscal year 2019.

However, the new NASA budget also says the agency is entertaining the idea of having international partners contribute the hab element if they are interested in teaming up on the LOP-G. Perhaps one of those partners will also contribute a better name!

In my view the only way we are going to back into deep space with humans is a variation of how the first space age, which ended in 1972, began. The genesis of Apollo was the cold war. Basing the nuclear deterrent months away in deep space on human-crewed spaceships will effect a second space age. China and Russia will follow our lead and also move their arsenals into space. Once the infrastructure is out there the second step will be to replace the present satellite junkyard in GEO with large crewed platforms. The third step will be space based solar power to remedy climate change and these three steps will enable space colonization as envisioned by Gerard K. O'Neill. The key to Human Space Flight Beyond Earth and Lunar Orbit (HSF-BELO) is lunar-water-as-cosmic-ray-shielding. So robot landers to exploit the resources on the Moon and shuttle water up to wet workshops is the logical path.

If, as you (Jason) correctly say, "you need to sell it", then the name needs to be as short as possible, as catchy as possible, and as intelligible as possible. Literally half the population don't even know what "Lunar" means. So that's no good. But it's at the Moon, right? That's why they used "Lunar". So call it Moonbase1. That's as short as possible, as catchy as possible, and 100% of the population gets it! Personally, I think the enormous $ would be better spent on robotic missions and space telescopes informing us re life on local and extrasolar planets. But if lunar activities get us closer to building giant modular telescopes on the Moon, I suppose it may be useful.

"But if lunar activities get us closer to building giant modular telescopes on the Moon, I suppose it may be useful." "-I think the enormous $ would be better spent on robotic missions-" Telescopes on the Moon actually do not make much sense. In my view your statement reflects the ideology that only "science" is worthy of expending resources on. This exclusivity trivializes Human Space Flight, placing HSF in the category of wasteful pursuits. This is what I regard as "The Great Divide" which is a schism the general public is not really aware of. The Survival Imperative has always been the reason for HSF. If something happens on Earth that wipes out the human race then.....the human race is gone forever. If, however, there are self-sufficient colonies with viable populations off-world then our species continues. Science can wait.

I went to the Deep Space Gateway Concept Science Workshop Meeting this week and do not recall LOP or LOP-G being used _once_ (although I am sure it was on the official project viewgraphs). Most common usage was "Gateway," followed by DSG.

I was going to suggest calling it TrumpGate but I think that name may already be taken.