Here are some takeaways from today's NASA budget proposal

Congress has yet to fund NASA in 2018, so the agency has spent this fiscal year operating on 2017-adjacent numbers, under a series of continuing budget resolutions (and two government shutdowns).

I had planned to first post the raw 2019 numbers in one of our handy, mobile-friendly tables before settling in to write a more in-depth look at the details. But NASA still hasn’t released the full budget document, and there are several structural changes to the way the line items for 2019 are presented.

Complicating matters further is that after the budget was complete, Congress raised government spending caps, and the Office of Management and Budget proposed to give NASA another $300 million. Most of that would go to human spaceflight.

For now, I’ll just include a screenshot from the agency’s budget overview document: 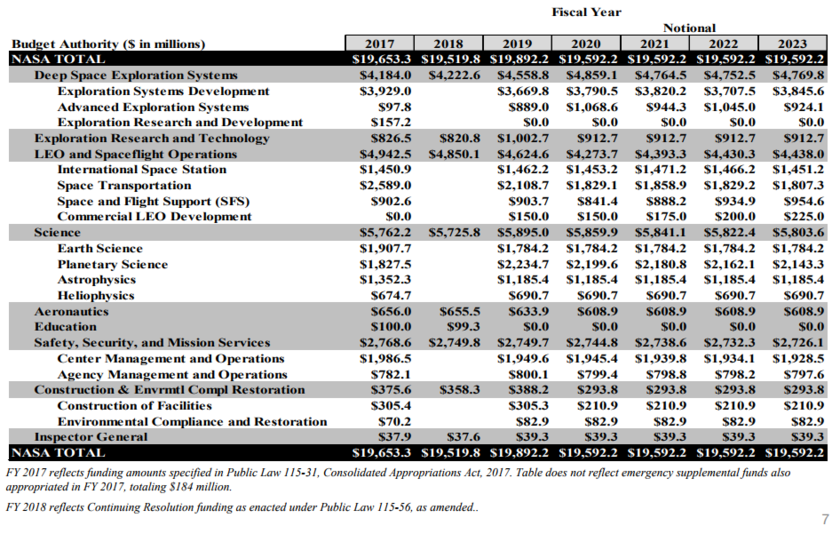 NASA's top line is proposed to end up at about $19.9 billion. That's a $372 million increase over what Congress most recently approved for 2017, and an $800 million bump over what the White House requested for 2018. It’s fair to say that at least in the short term, the administration’s interest in NASA has some funding behind it, though that interest is mostly centered on human spaceflight. The agency’s five-year budget runout looks less rosy; from 2020 through 2023, NASA’s top line drops and flattens at $19.6 billion.

The biggest surprise was astrophysics taking a big hit with the cancellation of WFIRST, a space observatory designed for exoplanet detection and dark energy research. The White House's rationale for the cancellation is that WFIRST was overbudget, too closely timed to the James Webb Space Telescope, and that good science can be conducted with smaller, cheaper missions.

WFIRST was the top recommendation of the National Academies decadal report for Astrophysics, and this cancellation will likely face strong pushback from the scientific community. Congress has provided WFIRST hundreds of millions of dollars in funding over the past few years, though one of its strongest advocates, Maryland Senator Barbara Mikulski, recently retired.

Two-and-a-half weeks after being leaked to the Verge, the White House’s plan to stop paying for the ISS by 2025 is officially out in public. The station's international partners have currently only agreed to keep the station running through 2024, but there has always been a question of whether or not that will stretch to 2028.

Through a new line item called "Commercial LEO Development," NASA is allocating $900 million through 2023 to spend on establishing a sustained commercial presence in low-Earth orbit. Put more simply, NASA will likely start giving commercial companies seed money to either build their own space stations or figure out how to transition the ISS to commercial control. This program could be structured similarly to the agency’s commercial crew and cargo program.

Expect this to get messy. There is already bipartisan support against any early end to the ISS program, led by Florida Senator Bill Nelson, Texas Senator Ted Cruz, and Texas Representative John Culberson. There's also some early industry backlash, notably by Boeing, which is the station's prime contractor.

Whether or not the station will stay operational in its current format beyond 2024, and how NASA transitions to something different, will be a major topic in the weeks and years to come.

We already knew NASA was shifting its focus from Mars to the Moon, but now we have some specifics. NASA is now calling the Deep Space Gateway the Lunar Orbital Platform-Gateway (can someone please come up with a better name?). The first LOP-G element, the power and propulsion module, was slated to launch on the first crewed Orion flight in 2023. (SLS is powerful enough to launch Orion and a co-manifested payload at the same time.) Now, that module will launch a year earlier, in 2022, on a commercial vehicle. A previous chart from a NASA advisory council meeting estimates the power and propulsion module will weigh 8 or 9 tons, which means the Falcon Heavy could be a good choice for the job.

NASA also would provide seed money for a variety of commercial partnerships, including on development of cargo and human-rated lunar landers, a new lunar science initiative, and the incorporation of the Space Technology Mission Directorate within its Deep Space Exploration initiative to provide focused technology research and development.

$268 million of that increase appears directed to "elements of science" for human spaceflight, most likely in the form of lunar precursor missions. The details are a bit unclear until we see the full budget.

The Mars sample return effort gets $50 million for early mission studies, and one budget document mentions the possibility of using commercial partners for the mission. The budget also allocates $150 million to planetary defense, and explicitly funds the Double Asteroid Redirection Test (DART) mission.

The administration’s $1.78 billion request for Earth science is actually a smidge up from the $1.75 billion requested in 2018, but the same missions proposed for cancellation in 2018 (PACE, OCO-3, and CLARREO) are still on the chopping block. The Radiation Budget Instrument mission was quietly cancelled before this budget request, and once again, the administration is trying to kill DSCOVR’s EPIC camera (they really, really don't like that camera). The Senate rejected last year’s cuts to Earth Science, though final congressional action has yet to occur, and these missions continue.

Once again, the White House proposes to cut NASA’s education division. Congress uniformly stands to reject this proposal for 2018, and will likely similarly intervene for 2019.

Casey Dreier contributed to this article.

"NASA is now calling the Deep Space Gateway the Lunar Orbital Platform-Gateway (can someone please come up with a better name?)" Human Outbound Missions for Exploration? Lunar Orbit Outbound Planetary Exploration Router for a start

If a public poll is held, we know that the following will win by a huge margin -- See the results of several international polls to name various ships, trains, ferries and bridges : Basey McBaseface Or maybe this doesn't apply in the US?

"once again, the administration is trying to kill DSCOVR’s EPIC camera (they really, really don't like that camera)" Some of us know the context, but not everyone does....