Back in June, NASA announced its newest batch of astronaut candidates. The 12 new recruits are a diverse mix of scientists and engineers, selected from a pool of more than 18,000 applicants from all 50 states. In August, the would-be astronauts began two years of training, after which they could be assigned to missions to the International Space Station, or future deep space exploration expeditions.

Two of the candidates are particularly suited to conduct scientific research on other worlds: Zena Cardman, a geobiologist, and Jessica Watkins, a geologist. I recently spoke with Cardman and Watkins about how their scientific backgrounds apply to their new job, and how significant it is that NASA selected scientists with field experience that can be applied beyond Earth.

Editor's note: The questions and answers have been edited for brevity and clarity. 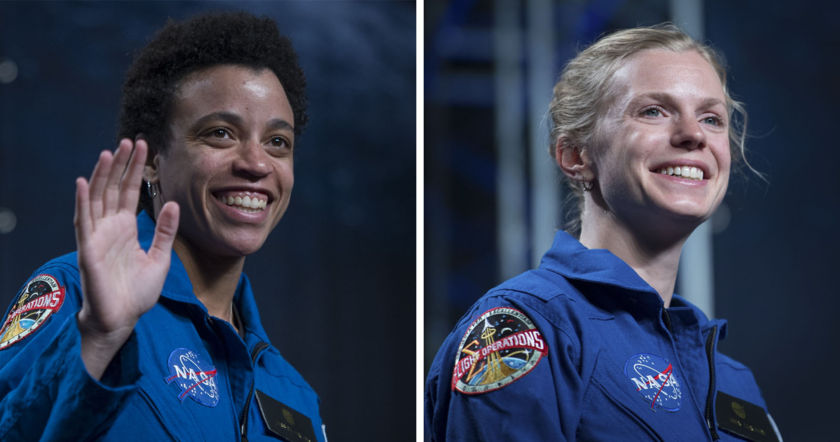 You're a geobiologist who has studied microorganisms in some really inhospitable places, such as caves, deep sea sediments and Antarctica. Do you think it's significant that NASA is training someone who could take that experience to other planets, and look for hard-to-find life on other worlds?

I think it's really exciting that our class is so diverse, and it includes test pilots, engineers, medical doctors and also a couple of scientists. So I do hope that some day I can use that scientific experience to turn my eye toward another planet or anywhere else in the solar system. But we all have to keep in mind that we're not doing our own research anymore. Now, I'm the eyes and ears and hands for a much larger body of research, a much larger project that's bigger than anything I could have done on my own. So it will have to translate and manifest itself in a different kind of way.

Through your research on some of these microorganisms, what is something interesting you've learned about places where life can exist? And does that give you hope there might be past or present life somewhere else in our solar system waiting to be discovered?

I'm not sure hope is the right word. I think it would be very interesting and equally profound either way, whether we find life elsewhere or not. One of the things I've come to realize through my research is how careful you have to be to say that something is truly a biosignature, that it was generated by a life form, versus something that could just happen chemically and get preserved in the rock record. So I think it's important to keep that in mind as we move forward. And of course, anyone who does work with the Mars rovers knows that very well already.

You've done a lot of analog missions, like BASALT (which does fieldwork to assess the habitability of early and present-day Mars), and Pavilion Lake, (which studies microbialites, some of the oldest fossil life on Earth). How does that translate into being an astronaut, and have you learned any lessons that might prepare you for deep space expeditions?

These projects are really interesting. They carry the same research theme as a lot of my own research, doing human biology in far flung places. So all of the science that they do is with an eye for how we can apply that to a place like Mars. But it's also an operational analog. What that means is, for example, we have a very real life support system—at Pavilion Lake, we had mini-submersibles that we were using to drive around the lake and actually conduct that science, which is a great analog for operating, say, in a spacesuit or in some small vehicle for exploring another planet that doesn't exist yet.

In BASALT we incorporated the idea of communications latency, so we have people who are playing the role of astronaut, doing the science, but then they're talking over delayed comms to a backroom team of experts who are playing the role of scientists back on Earth. And so they have anywhere from a five-to-15 minute communications latency, and it's been really interesting and eye opening for me to see how you have to operate as an astronaut who is the eyes for a scientist, where all they're getting is a still image every couple minutes, or maybe a very slow-to-download video. So I think that really helped me get an eye for how best to serve scientists back on Earth.

Assuming unlimited resources and unlimited money, if you personally could go anywhere in the solar system to explore and do research, where would that be?

Well, I hate to say it, but I can't possibly pick right now! I'm so excited just to be part of the program, and I know wherever we wind up going I'll be absolutely thrilled. Right now, I'm just focusing on my training period.

If it were Mars, is there any specific place you'd go, or any kind of scientific experiment you'd want to do there?

Part of me would like to see one of the deltas on Mars, as a geobiologist and someone interested in things that get preserved in sediments. But I would also love to follow the tracks of one of the rovers that's there now, and see with my own eyes what they've been following for years now.

What are you most looking forward to when it comes to astronaut training? And is there any kind of scientific training you'll be doing, or is it mainly how to deal with staying alive in space?

We will have some scientific training, which is especially important for the people coming in without a research science background. For me, I'm actually most excited about learning Russian. I've never had the chance or the need to learn a foreign language as an adult. And of course, we'll be flying T-38s and learning all of the techniques for spacewalking, and all of the engineering systems on the space station. So I really think it's great that we're all coming in with these very different backgrounds, because we'll be able to help each other out through that training period. 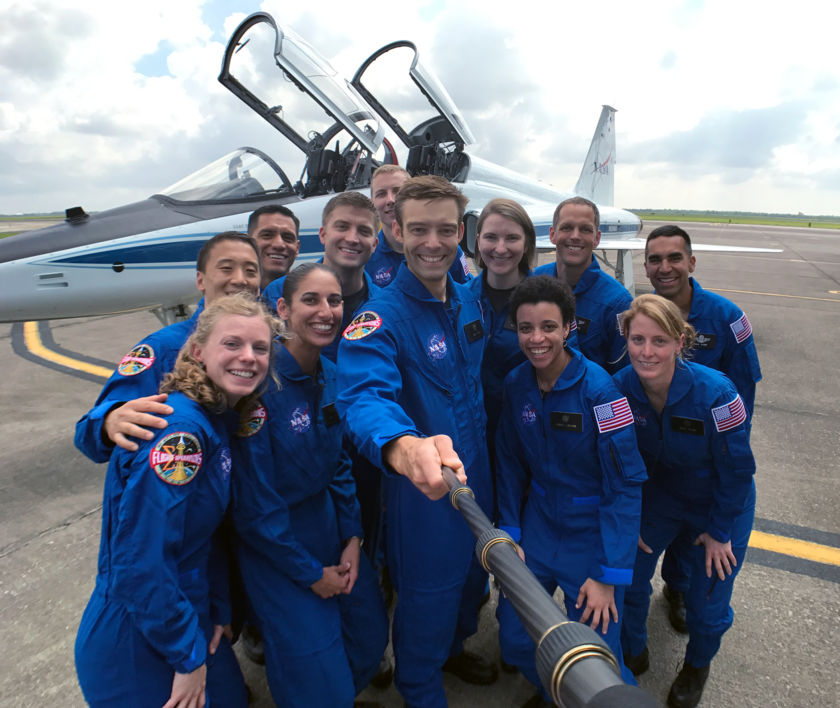 NASA's 2017 class of astronaut candidates poses for a selfie.

You're a geologist, and NASA, as far as I know, doesn't hire all that many geologist-astronauts. One in particular who comes to mind is Harrison Schmidt, who walked on the Moon. Do you think it's significant that the agency is considering a scientist who can actually go out and do field geology on other worlds?

I certainly think that it's exciting. I think that it hopefully is indicative of a broader passion that NASA's exploring. This idea of being able to have a long-term presence in the solar system is something that I think NASA is striving for, so having a scientific perspective on that goal will hopefully be useful as we start thinking about going to other bodies and exploring outside of low-Earth orbit.

You have a lot of experience with robotic Mars missions, including Phoenix, Curiosity, the Mars 2020 rover, and a potential Mars sample return mission. What are some of the things you've learned from operating robots on other worlds that gives you insight into what it would be like to go there as an astronaut?

From an operational standpoint, I think one of the biggest things I've taken away from each of those missions in their own separate ways, is the importance of teamwork, and how crucial it is to have people with different expertise and backgrounds. Scientist-engineers, scientists with different expertise within their own field, and vice-versa for engineers—having all of those people come together to accomplish these impossible goals that we've set for ourselves—I think that is an important piece. In terms of human exploration, it's going to require international collaboration and teamwork, where we're building on each other's strengths in order to make these things happen.

You've also done some analog work, such as serving as the chief geologist for Desert RATS, where you were presumably cooped up with other astronauts simulating a real mission with real scientific objectives. What lessons have you learned from that experience that you would apply towards being an astronaut?

There were two separate analog missions that I think had different learning outcomes. The first was Desert RATS, and the simulation that I was a part of had a scientific team in the back room—essentially sitting at Mission Control at Johnson Space Center. And then we had a team of scientists and astronauts out in the field, out in Arizona somewhere, doing some geology. I was a part of the science backroom team for that, and the goal of that exercise was to see how well we can communicate science that's being done, and the observations that are being made on the surface. How well can we communicate that back to a team of experts back on Earth, and how can we facilitate that communication, especially thinking about things like communications delays and data uplink rates? It definitely brought to light some of those complications, but certainly those types of exercises are important for ironing out some of those kinks.

The other analog experience I did was at Mars Desert Research Station in Utah, where we all kind of cooped up in a tin can in the middle of the desert, and doing a simulated human exploration mission where we were donning spaceflight gear and getting on rovers, which were ATVs. The more illuminating piece of that was the human aspect of some of these long-duration missions that we have coming up, or are thinking about doing. You learn to communicate and how to play off of each other's strengths in a social and professional situation when you're in close quarters like that. So that was also a really fun experience.

Assuming unlimited resources and unlimited money, if you personally could go anywhere in the solar system to explore and do research, where would that be?

Given that type of flexibility and freedom, I certainly would like to go to Mars. Mars has a special place in my heart because I spent so much time researching it. I think it would be really neat to be able to ground truth some of the observations that I've made using the rover and the orbiters, and really get my hands dirty and see with those rocks really look like up close.

What are you most looking forward to when it comes to astronaut training? And is there any kind of scientific training you'll be doing, or is it mainly how to deal with staying alive in space?

Our training is varied—it will be really great to be able to put our hands in a bunch of different cookie jars. So I'm really excited about all aspects of that.

Learning how to fly a jet will be something new and exciting, and we're also learning spacewalking, simulated in the Neutral Buoyancy Lab. That will be a fun experience. And then we learn Russian. So we're really using different parts of our brains and different skill sets. And the fun thing about that will be working with my other 11 classmates. Each of us bring to the table different expertise, different strengths, different skill sets, and that each of those strengths will show themselves in different parts of the training. So I really look forward to learning from each other and really seeing each other shine in different pieces of that, during these two years.

In terms of scientific training, I know that we do have some geology training; specifically I think we do some local field trips somewhere around the Houston area, doing some geology, and then there's also robotic training.