Your guide to Jim Bridenstine, the new nominee for NASA administrator

The White House has announced it will nominate Oklahoma Congressman Jim Bridenstine to become NASA's next administrator.

The news came late Friday evening, before a three-day U.S. holiday weekend. In a statement, NASA acting administrator Robert Lightfoot said he looked forward to working with the White House to ensure a smooth transition.

Bridenstine must be confirmed by the Senate before taking office. Today's announcement prompted immediate backlash from Florida Senators Marco Rubio, a Republican, and Bill Nelson, a Democrat. Rubio and Nelson told Politico they had concerns about a politician leading NASA.

"I just think it could be devastating for the space program," Rubio said.

Rubio and Nelson's opposition is notable because Bridenstine has long been the assumed frontrunner for the position. Before the Obama administration settled on Charlie Bolden for NASA administrator in 2009, they floated other names, including Air Force Major General Scott Gration. After Senator Nelson publicly opposed the choice, the White House withdrew Gration from consideration.

Rubio stopped short of saying whether or not he would block Bridenstine's nomination.

The average time it takes to confirm a NASA administrator is 40 days. The fastest an administrator has been confirmed was James Webb, in 1961 (15 days), and the longest time it has taken was 80 days, for Richard Truly, in 1989.

What do we know about Bridenstine? Here's a guide to the potential future NASA chief. 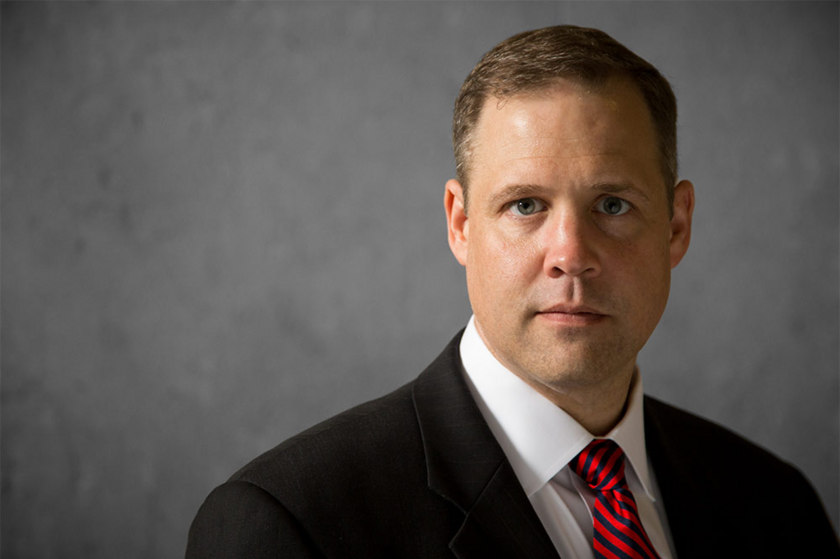 Bridenstine represents Oklahoma's 1st District, which includes most of Tulsa and is home to almost 800,000 people. He was elected in 2012, and has since run unopposed, winning reelection in 2014 and 2016. He serves on the House Armed Services Committee and the House Science, Space and Technology Subcommittee. Most Congressional ranking tools score Bridenstine as extremely conservative. He initially backed Texas Senator Ted Cruz for president before switching to Trump when Cruz withdrew.

Bridenstine was as a Navy pilot for nine years, and flew combat missions in Iraq and Afghanistan. He holds the rank of Lieutenant Commander, and is a member of the Oklahoma Air National Guard. He earned a triple bachelor's degree in economics, psychology and business from Rice University, and has an MBA from Cornell University.

In February 2017, Bridenstine answered this question during a speech at the Commercial Space Transportation Conference in Washington:

"People often say, 'Why are you so involved in space issues? You don't have any space interests in Oklahoma.' You bet I do. My constituents get killed in tornadoes."

For Bridenstine, the ability to detect severe storms with space satellites is extremely important. He supports cross-agency climate satellite programs like Suomi-NPP and JPSS, but wants to augment government systems with commercial capabilities to increase data collection and offset potential coverage gaps.

He has previously expressed skepticism of climate change. In 2013, he said global temperature changes correlate with Sun output and ocean cycles, rather than human activity. The following year, he worked with Ted Cruz on a complementary Senate and House bill called the American Energy Renaissance Act which would have removed climate change provisions from five existing laws, including the Clean Air Act and the Endangered Species Act.

Bridenstine's signature bill is the Space Renaissance Act. It's stated purpose is to "permanently secure the United States as the preeminent spacefaring nation," through military space capabilities, commercial innovation, and "stability, accountability, and mission clarity at NASA."

The Act, which has its own website, was not necessarily designed to pass; Bridenstine describes it as a clearinghouse for ideas that can be inserted into other bills. During his speech at the Commercial Space Transportation Conference, he said this has already happened on several occasions, and before he was nominated as NASA administrator, he planned to introduce an updated version of the bill.

Bridenstine has expressly supported NASA's Space Launch System and Orion, though he remains a strong commercial space advocate and describes his philosophy as centering around four points in particular:

Bridenstine believes it is critical for America to send astronauts back to the Moon, for reasons that include national security, commercial interests, and science. He seems particularly concerned with China's lunar ambitions, and the threat of space-based anti-satellite capabilities.

At the Commercial Space Transportation Conference, Bridenstine said he would favor focusing on the Moon's poles, where water ice exists in permanently shadowed craters. Robots would go first, to be followed by humans.

A week later, speaking at a Science, Space, and Technology Committee hearing, he described one possible model for government and commercial lunar partnerships:

"It's possible that the U.S. government could, in essence, provide transportation to not only lunar orbit, but to the lunar surface, and have the private sector invest in developing not only the moon, but in the capacity for cislunar, which is a geopolitical concern (a reference to China's activities) right now for the United States."

He is, however, skeptical of NASA's current Journey to Mars program, based on testimony he has received from various experts. He isn't convinced NASA can reach Mars by the 2030s, and believes establishing a permanent presence on the lunar surface could be an important intermediate first step.

The fact that we could have a new Nasa administrator who denies human's involvement in climate change notwithstanding all the scientific evidence is frightening. Now more than ever we need space assets to understand climate change better and only Nasa can deliver these at present. It is a chilling reminder that we need politicians that treat science seriously if we want to build a better world for our children.

Although as a scientist I'm personally very sceptical of all the panic (more like religiosity actually) around "climate change", and therefore disagree with Bernard re damning Bridenstine solely on those grounds, it does seem from his resume above that he is utterly a military and business guy, without any discernible skerrick of scientific curiosity! That's a bit terrifying for anyone interested in planetary science or genuine exploration generally (as opposed to just putting pointless boots on ground or taking quasi-military occupation of currently vacant regions -- like some deluded modern expansion of the US Frontier). Especially when we otherwise stand on the brink of several absolutely wonderful robotic missions. So let's hope that assessment of him is wrong, or that there are indeed opponents in Congress who see the dangers.

climate is always changing. A thousand years ago, Glacier Bay in Alaska had NO glaciers and neither did Glacier NP in Montana. Napoleon's army froze to death in EARLY October during the retreat from Moscow in 1812. The Little Ice Age really happened, however.... Greenhouse gases seem to be heating up the planet, and it's better to be safe than sorry. Peak oil in Saudi Arabia and the Persian Gulf is only a decade or so away, and fracking has ruined Oklahoma. We need renewable energy and "clean coal" is a hoax. We have to ask this SOB whether or not he believes in Darwin. Is the world 5000 years old or 4.5 billion? It's important. If it's the former, then make it public and keep him out. Shame him. Creationist Astronomy is even worse than Creationist Geology, which is totally disgusting. Finally, we should ask him what is position is on building new weather satellites. Several are approaching their maximum lifespans and these things are now totally necessary. Could you imagine what would have happened to Texas if we didn't have ANY weather satellites to warn us horrible Harvey was coming? Also, we need more money for NOAA and the USWS. But NASA is in charge of satellites, and we need to launch some new ones pronto!

I note Bridenstine's commitment to ongoing weather observations as a plus. However, a climate denialist (these people are not sceptics) has as much right heading NASA as George Deutsch had being its press officer.

Ugh, he sounds as bad as Bolden or even worse, if that is possible. He seems besotted with the whole manned spaceflight rathole and their dreams of the moon (and endless pork). Is he going to try to destroy planetary science, to fuel manned pork, like Bolden tried to do? I could care less how he feels about climate change; the important issue is whether he will support planetary missions or try, like Bolden, to endlessly subvert them. I fear the latter.

Why, oh, why do we get one pilot / manned-mission dope after another to run NASA? Why can't we get a planetary scientist or JPL admin to run NASA? The low point has to be Bolden with all his crackpot schemes, such as the asteroid capture stunt, to funnel more money to the Human Exploration and Operations (HEO) Mission Directorate. I have this awful feeling that he was behind the ridiculous MOXIE experiment on the 2020 rover and have an even worse feeling that this pointless piece of junk displaced a new SAM instrument. It will take a decade or more for planetary science to repair the damage done by Bolden. It looks like Bridenstine will be bad, but how bad I cannot say.

Aarrrghhh. From another site, Bridenstine-proposed objectives for NASA: "(1) The expansion of the human sphere of influence throughout the Solar System. (2) To be among those who first arrive at a destination in space and to open it for subsequent use and development by others. (3) To create and prepare infrastructure precursors in support of the future use and development of space by others." Sounds horrible for Planetary Science!

Looking through preceding comments, should believers in climate change (most here are) really be worried whether Bridenstine is a creationist or whether he believes in global warming ? You need Earth observation satellites in all cases. Its more of interest that he seems to have been chosen for willingness to be unpopular with Space States and the astronaut lobby. It would also be interesting to know the underlying reasons why the two Florida representatives are resisting. Bridenstine isn't a Space-State man... maybe this will give him objectivity, avoid "jobs programs" and make him a stronger leader. Rather than criticizing his nomination, wouldn't it be more constructive to (1) predict what he's going to do, (2) plan on limiting collateral damage and (3) take advantage of opportunities. About the third point; Remember the strategic motivations for Apollo ? Science was more or less tacked on to missions initially motivated by politics. However Apollo was a scientific success. On the same basis, visiting the lunar poles is something very exciting and finding re-frozen comet debris should get enthusiastic reactions here, whatever you think of his motivations. Even if we don't like it, everything suggests that there will *soon* be a far greater human presence in space including on other planetary bodies (Moon, Mars...). These people will come from various countries and many are likely be neither professional astronauts nor scientists. Should we try to prevent this ? Or should we rather accept this as a fact and plan on doing science in this context ?