On Friday, President Trump signed an executive order reactivating the National Space Council, an advisory committee focused on developing a national space strategy and improving coordination between agencies with a stake in space operations.

Two of those Space Council seats, however, have yet to be filled: the director of the Office of Science and Technology Policy, and the administrator of NASA. 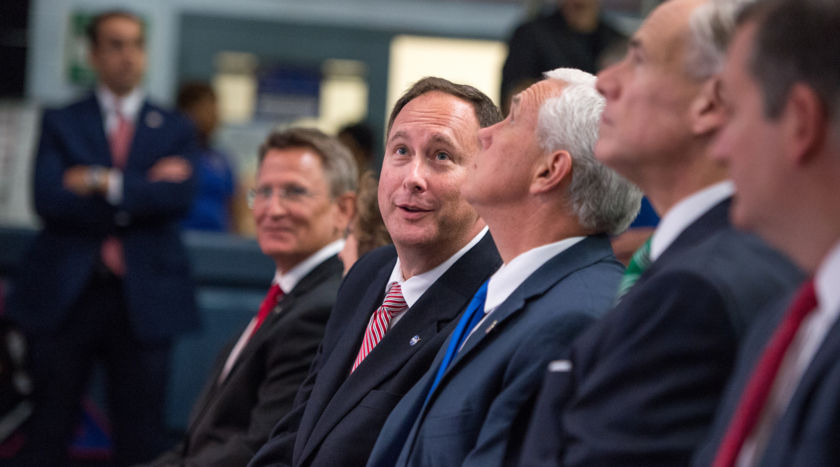 On July 4, Robert Lightfoot will begin his 165th day as acting NASA administrator. Lightfoot, the agency's highest-ranking civil servant, took over for Charles Bolden, an Obama political appointee, on January 20.

President Trump has yet to nominate Bolden's successor, and tomorrow, that will be an all-time agency record, surpassing a benchmark set by the Nixon administration in 1971.

Low was a key figure during the Apollo program, and during his career as deputy admin he contributed to the early development of Skylab, the Apollo-Soyuz Test Project, and the space shuttle program.

NASA is hardly alone in terms of federal agencies waiting for the White House to fill important positions. According to an analysis by The Washington Post, out of 562 high-level appointees requiring Senate confirmation, Trump has nominated just 161, and had only 46 confirmed (as of June 29). That puts him behind the pace of the past five presidents. The closest competition is George H.W. Bush, who had selected 204 appointees and had 113 confirmed by this point in his first term.

"I don't think you can talk about NASA's leadership without talking about the activation of the National Space Council," he said.

The National Space Council was last convened during the George H. W. Bush administration. One of the main goals of the space council, according to Trump campaign advisor Robert Walker, is to drive out government inefficiencies.

"We're forward-looking on this, to say that the National Space Council could serve the interest of space policy by assuring that that the nation is not duplicating efforts unnecessarily," Walker told me shortly after the election.

One additional variable regarding the Space Council is its yet-to-be-named executive secretary, who could have the opportunity to influence Trump space policy. Some D.C. insiders have suggested Scott Pace, the current head of the George Washington University Space Policy Institute, is a likely candidate for that position.

Oklahoma representative Jim Bridenstine has long been the assumed front-runner for NASA administrator, though in mid-May, Bridenstine apparently told one reporter he hadn't heard from the White House in a month.

Thus far, the White House has not signaled a desire to make large-scale changes at NASA, with Trump signing a NASA Transition Authorization Act and releasing a 2018 budget that largely maintained the status quo for the agency's major programs, including human spaceflight. The signing of the executive order establishing the Space Council Friday was attended by several prominent aerospace industry representatives, but appeared to lack representation from newer firms like SpaceX and Blue Origin.

Does that mean change isn't coming to NASA? Not necessarily, Logsdon said.

"The 2018 budget proposal came out of OMB (the Office of Management and Budget) with very little guidance or involvement from Trump or his associates," he said. "It was basically a holding action."

This deferment has precedent. In 2009, the Obama administration's first NASA budget proposal kept George W. Bush's return-to-the-Moon Constellation program intact, while noting a review of the agency's human spaceflight program would be forthcoming. Following that review, it was the second budget proposal, released on February 1, 2010, that canceled Constellation. This kicked off a lengthy Congressional battle that resulted in the creation of the Space Launch System.

President Trump has shown at least a passing interest in NASA activities. He mentioned space exploration during a joint address to Congress, hosted a press event for the signing of the authorization bill, and in April, he spoke with astronaut Peggy Whitson on the International Space Station.

Could the White House, Space Council or some combination of both alter NASA's current trajectory? It's certainly possible. But first, they'll need to fill a few job openings.

For the love of gawd, can it be a JPL guy or a planetary scientists? No more flyboys, like Bolden and the rest, who will forever try to subvert planetary science to fuel the insatiable maw of the manned mission pork machine.

It's always interesting to look ahead at the future of space exploration, and hopefully things begin to pick up rather than wind down. Awesome article, thanks so much for sharing, Jason!