Orbital ATK's Antares rocket will launch a Cygnus spacecraft to the International Space Station for the company's first mission under NASA's next round of commercial cargo flights, known as CRS-2.

The mission order, which was confirmed by NASA and Orbital ATK representatives, falls under a contract awarded in January 2016 giving Orbital ATK, SpaceX and Sierra Nevada a minimum of six cargo flights each to the ISS between 2019 and 2024. The confirmation Antares will be used during CRS-2 comes with additional information about the rocket's performance, and how the price of Cygnus flights compares to other commercial spacecraft.

"We do not have plans to retire Antares," company spokesperson Jennifer Bowman said during a recent interview.

Under the terms of the first round of commercial cargo awards, Cygnus flights are more expensive than Dragon flights. For CRS-2, however, Orbital ATK said Cygnus flights will be cheaper than both Dragon and a third option, Sierra Nevada's Dreamchaser spaceplane. This claim is supported by NASA's CRS-2 selection statement, which said Orbital's proposal "had the lowest mission prices of all the proposals."

"The CRS-1 and CRS-2 bids are markedly different in price," Bowman told me.

As for how different, neither NASA nor its commercial partners will elaborate, citing proprietary financial information. The maximum combined value of the CRS-2 awards for all companies is $14 billion.

NASA does, however, appear to get a better deal when launching Cygnus on an Antares rather than an Atlas V, an option that came into play following the loss of an Antares rocket in 2014.

"Antares does offer the lowest cost per mission for pressurized cargo for the CRS-2 program," said Trina Patterson, a senior communications manager for the company's launch vehicle division. 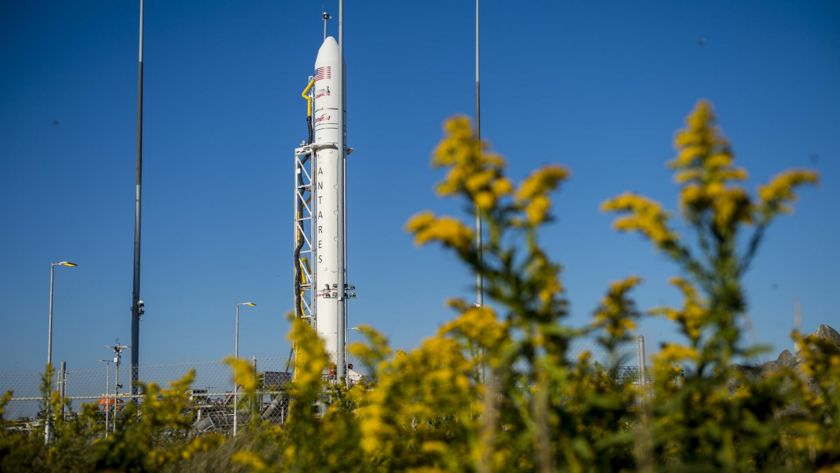 Antares on the Launch Pad

Orbital ATK said a benefit of Antares over the Atlas V is launching from Wallops Island, Virginia, which has a less-crowded schedule than Kennedy Space Center, where SpaceX and United Launch Alliance also book launch slots.

"We like to call it our uncontested launch site," Patterson said.

The Wallops Flight Facility, as it is formally known, is the country's only NASA-operated launch range, and is not subject to Air Force oversight and coordination. Other than Orbital ATK Antares and Minotaur flights, the facility is best known for sounding rockets and balloon missions.

The plan all along: RD-181 engines

In my previous article exploring the future of Antares, I noted the rocket has yet to find a customer beyond NASA's ISS cargo program. Yet one of the reasons Orbital ATK was selected for the program was to stimulate the U.S. launch market.

Antares debuted in 2013 sporting a pair of Aerojet AJ-26 engines, which were refurbished powerplants left over from the Soviet Union's N-1 moon rocket program. After the 2014 launch accident, in which an AJ-26 engine was implicated, Orbital ATK quickly announced a plan to switch to a more modern Russian engine: the RD-181.

Company officials told me upgrading to the RD-181 was actually the plan all along—the accident merely accelerated the process.

In 2012, Orbital ATK signed a separate NASA contract, known as NLS-II, to place Antares on the menu of possible NASA science mission launchers. Bowman and Patterson said that at the time of the accident—the rocket's fifth flight—Antares had just gained enough credibility to become a viable option for other customers.

That momentum was derailed, and the engine swap set the rocket’s ambitions back further, because a re-flight was necessary under the NLS-II contract. After last year's successful return-to-flight mission, Antares is available for NASA science missions once again.

"We do now have some options we are working toward that are non-cargo," Patterson said.

If Antares flights are cheaper, why would NASA choose an Atlas V for Cygnus flights?

At the moment, the reason is cargo capacity. The Atlas V, which launches Cygnus using the rocket's lightest-lift variant, the 401, allows Cygnus to carry up to 3,513 kilograms. Antares, at the moment, can only lift 3,200 kilograms.

Orbital ATK said that won't be the case much longer. The RD-181 engines offers a 13 percent thrust increase over the AJ-26 engines, and the rocket performed better than expected during its return-to-flight mission. This will allow the company to shed what it calls "contingency margin."

When combined with a CASTOR 30 XL upper stage, Antares in its new configuration is capable of matching the Atlas V 401.

"For OA-11 (the final CRS-1 flight), we will be increasing the payload capability to 3500 kilograms," Patterson said.

Through at least 2024, then, Orbital ATK expects to launch a lot of ISS cargo flights from Wallops Island.

"ULA has been a great partner, and if NASA wants us to launch Cygnus on an Atlas again, we will be happy to do so," Bowman said. "However, our baseline plan is to launch on Antares for CRS-2, unless otherwise asked or directed."

"This claim is supported by NASA's CRS-2 selection statement, which said Orbital's proposal 'had the lowest mission prices of all the proposals.'" Jason- Note that in the selection statement they only compared based on up-mass (I don't recall if this was only pressurized or included unpressurized as well). This was in order to get an apples-to-apples comparison across all three platforms. Dragon offers additional capability that Cygnus lacks, namely returning down-mass. So, if they were to split the contract with down-mass treated as a separate line item, the relative costs of the missions might very well change. It's certainly possible that Antares/Cygnus still would come out as the lowest cost option but it's not at all obvious that this is so. Either way, kudos to NASA to cultivate a bevy of options that are putting downward price pressure on ISS supply.