SpaceX is poised to make history this week by reflying a rocket booster that launched a payload into space last year before landing on a drone ship in the Atlantic Ocean.

It's the first attempt to demonstrate a capability the company has worked toward since its founding in 2002. If successful, the flight could mark a new milestone in the quest for what many consider to be the holy grail of affordable spaceflight: reusability.

The mission will blast a communications satellite to geostationary orbit, and the launch window currently opens Thursday, March 30 at 6:27 p.m. EDT (22:27 UTC). 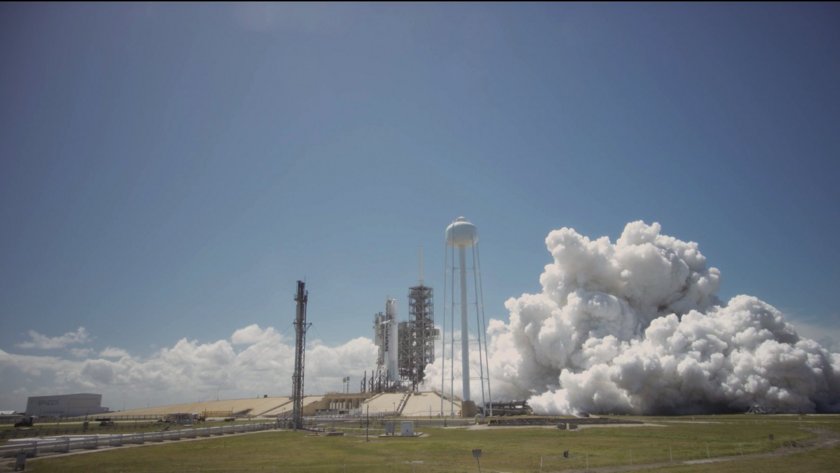 SpaceX test-fires the first stage of a Falcon 9 rocket on Monday, March 27, 2017. The rocket, which successfully landed on a drone ship in April 2016, is scheduled to refly on the SES-10 mission.

How big of a deal is this?

It's a very big deal.

SpaceX's entire philosophy revolves around the concept of reusability. Company CEO Elon Musk has been dreaming about reusable rockets since the company's inception 15 years ago, when there was only a Falcon LV—which later became the Falcon 1 Musk proudly displayed on the Washington, D.C. National Mall in 2003. The company's website says reusability is "the key to making human life multi-planetary" because it could lower costs to the point where sending a million colonists to Mars is a feasible plan.

SpaceX first started playing around with reusable rockets at its McGregor, Texas testing facility, using a prototype called Grasshopper. After a series of landing attempts that ended in spectacular fireballs, the company successfully stuck a booster recovery at Cape Canaveral in December 2015. The feat has since been repeated on land and at sea, but SpaceX has yet to refly one of its returned rockets.

Where does the flight fit in terms of firsts?

We have to specify "orbital" since Blue Origin has performed this feat during suborbital flights. We also have to say "liquid-fueled" because the space shuttle solid rocket boosters were reusable. Alternatively, we could scrap "liquid-fueled" and add something about the booster landing upright, rather than splashing into the ocean under parachutes like shuttle boosters.

That makes this sound like it's not a very big deal.

No, it still is! Perhaps a better way to describe the flight is:

SpaceX is about to take the concept of reusability farther than anyone ever has.

NASA was in the business of reusable rockets during the shuttle era, from 1981 through 2011. In addition to the solid rocket boosters, the shuttle itself was reusable, including its three main engines. But the program's original reusability ambitions were never realized. Vehicle refurbishment and turnaround times were far longer than predicted, and by the end of the program, the cost of a single launch hovered around $500 million.

Blue Origin has already flown and reflown its New Shepard rocket system multiple times, but those were suborbital test flights. SpaceX is doing this on an orbital flight, with a paying customer.

How much cost savings are we talking?

We don't know, since SpaceX and this particular customer, SES, are private companies.

The list price for a Falcon 9 flight to geostationary orbit is $62 million. Actual launch costs can be higher, depending on how much ground support you require; the NASA-NOAA Jason-3 flight to low-Earth orbit, for instance, cost $82 million.

SpaceX has hinted customers that don't need to throw their rockets away might eventually see 30 percent discounts. A light enough payload allows the company to add landing legs and grid fins, as well as hold back some fuel for the descent.

If you're willing to ride on a "flight-proven" rocket, as SpaceX calls it, President and COO Gwynne Shotwell said you might get another 10 percent off. 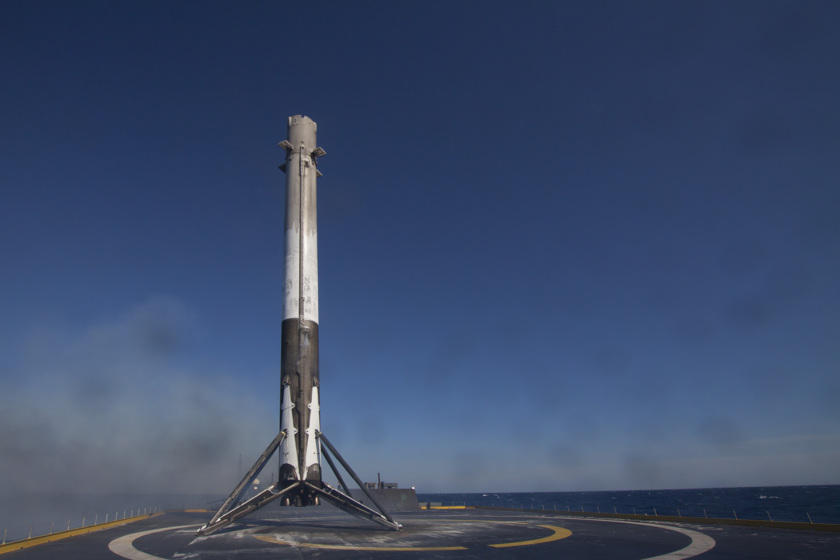 Where did this particular booster come from?

This is the recovered Falcon 9 booster from CRS-8, which launched a Dragon cargo ship to the International Space Station on April 8, 2016.

After launch, the booster made the first successful landing on the drone ship Of Course I Still Love You. Elon Musk originally wanted to refly the booster last June, but that was delayed, and a September pad explosion pushed things back even further.

In all this rocket talk, we forgot about the payload. What is it?

The payload is the SES-10 communications satellite. It's heading to geostationary orbit, and will hover above Earth at a longitude of 67 degrees West, where it will provide communications services to Latin America.

Brazil will also use the satellite for off-shore oil and gas exploration, SES said. 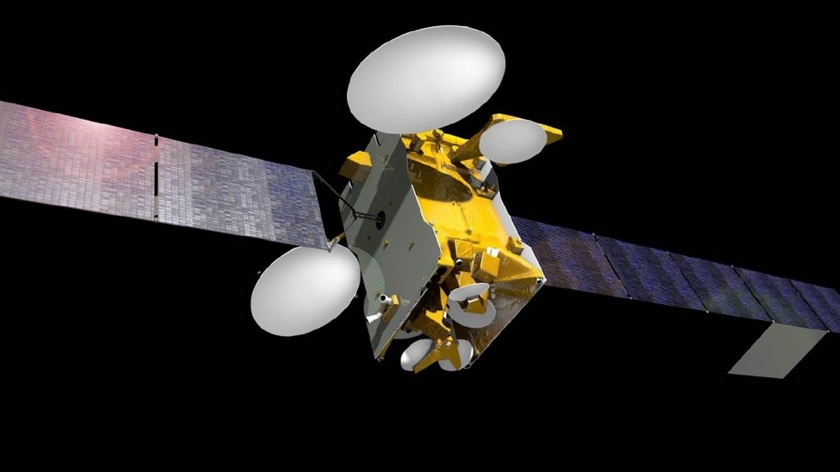 So is this actually going to work?

SpaceX sure thinks so—otherwise, the company probably wouldn't be risking their customer's multimillion-dollar communications satellite in the process.

If everything goes well, the booster will once again land on the Of Course I Still Love You drone ship. Assuming the rocket doesn't become a museum piece after that, maybe we'll see it fly again.

quoting Jason Davis "So is this actually going to work? SpaceX sure thinks so" and so does Martin Halliwell, "new space" supporter who just happens to be chief technology officer for the Luxembourgois customer SES. : quote from http://spacenews.com/spacex-to-launch-ses-10-satellite-on-reused-falcon-9-by-years-end/ “Having been the first commercial satellite operator to launch with SpaceX back in 2013, we are excited to once again be the first customer to launch on SpaceX’s first ever mission using a flight-proven rocket". As a European, I'm quite proud that at least somebody courageous here is taking a personal risk (accountability) by putting a real satellite on that first reuse launch. This is moving the whole world forwards. ...best of luck to SpaceX and SES !

"We also have to say "liquid-fueled" because the space shuttle solid rocket boosters were reusable" By a very loose definition of reusable. In addition to hitting the water (and hard), they had to be taken apart, recast and reassembled each time, with only the casings and random other parts reused. My understanding is that it was roughly a wash in terms of reuse vs. building new cost.

I've read a quote from one of the executive officers of SES that 'Gwen (Shotwell) promised them' some piece from the reused booster. I assume that might affect whether or not this particular rocket would be used for a third flight (I assume not?).

The usual naysayers of this site are strangely quiet at the moment :-)

Keith: It's going to be making a hot landing. It'll be lucky if it lands at all.

quoting Karen: 03/29/2017 06:28 CDT "It's going to be making a hot landing. It'll be lucky if it lands at all". the space equivalent of the circus expression "break a leg". In fact the hosted webcast kept mentioning possibilities of failure. https://youtu.be/xsZSXav4wI8?t=536 : "While there are a thousand ways for a rocket to fail, there is only one way for it to succeed" As we now all know, it didn't just land (and get the customer's satellite into orbit) but likely landed the fairing too. According to this: https://forum.nasaspaceflight.com/index.php?topic=42544.msg1661124#msg1661124 ChrisGebhardt, Assistant Managing Editor quote; "BREAKING news: Payload fairing LANDED SUCCESSFULLY. Fairing has thruster systems and steerable parachute. Was just shown pic of intact fairing floating in ocean. ============================ @Jason Davis Maybe readers of your Planetary blog would also like to be shown a picture of the fairing floating in the ocean. Its best to ask a true professional with good connections (flattery gets you everywhere) or failing that, it would be great to be filled in on the context of the fairing recovery and maybe some perspectives. Thanking you for your past, present and future blogposts !

sorry to flood but following on from comment 04/03/2017 09:38 CDT I'm reading this days late, but as you will know, the above info is mitigated by unconfirmed tweets from secondary sources that merely say a step was made in the right direction such as: https://twitter.com/SpaceBrendan/status/847599001746644996 "Musk: Correction, not recovered, but it was directed to a landing area. Will have "bouncy" castle soon". Reuters has yet another version, and mentions also the 24 hour turnaround project plus reviving the envsionned second-stage recovery. http://www.reuters.com/article/us-space-spacex-recovery-idUSKBN1722LD Fairing recovery looks quite reminiscent of how SpaceX worked slowly to stage recovery or to cold propellants. Its very empirical and they discover how to get there on arrival ! This gives an idea of the entry barrier awaiting any newcomer to reflight market such as Blue Origin.