The Cassini mission at Saturn ends in 6 months and 5 days.

On September 15, after 13 years in orbit, Cassini will plunge into Saturn's atmosphere, preventing it from accidentally colliding with the potentially habitable moons of Enceladus and Titan.

Right now, the spacecraft is in the midst of 20, ring-grazing orbits, after which it will maneuver itself into a path that will take it between the rings and the planet itself on April 22.

At the moment, Cassini's outer ring orbits are revealing some wild, high-resolution shots of some of Saturn's most enigmatic worlds. Most recently, this included new looks at 35-kilometer-wide Pan. On March 7, Cassini got its best view yet of the ravioli-shaped moon, which orbits inside the A ring's Encke gap. 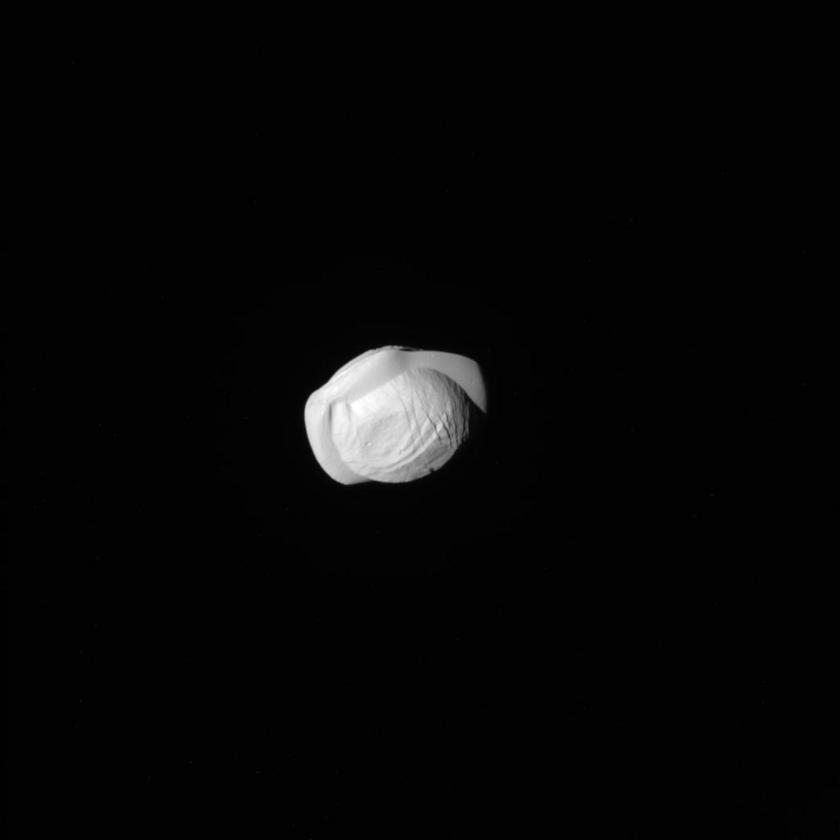 Saturn's moon Pan, as seen on March 7 by Cassini.

How amazing is that? Scientists think the smooth equatorial bulge is ring material that has accreted around Pan's surface. Here's another shot, from 25 minutes later: 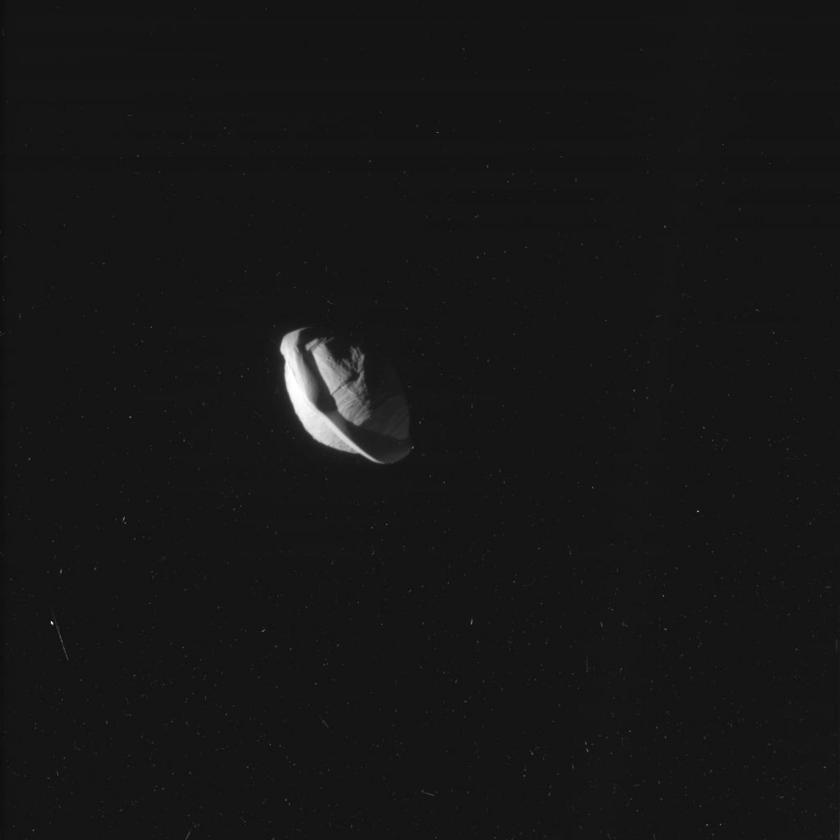 Saturn's moon Pan, as seen on March 7 by Cassini. This shot was taken 25 minutes after the first closeup.

What else has Cassini been seeing? Quite a lot. Here's an incredible image that was captured last month of a "propeller" inside Saturn's A ring: 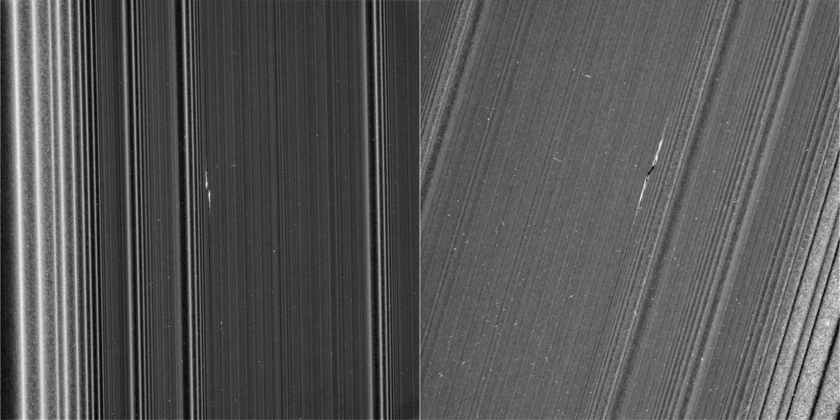 Two images of a propeller inside Saturn's A ring, as seen by Cassini on 21 February 2017.

What you're seeing is a tiny moonlet inside the rings that have pried open the surrounding ring material by gravity. (The NASA Photojournal site explains this in more detail.)

Two images of a propeller inside Saturn's A ring, as seen by Cassini on 21 February 2017. The images have been cropped and aligned.

For a better idea of how Saturn's tiny worlds gravitationally perturb ring material, check out this mosaic of the moon Daphnis. Emily posted about this image back in January; this is a newer mosaic combining multiple shots: 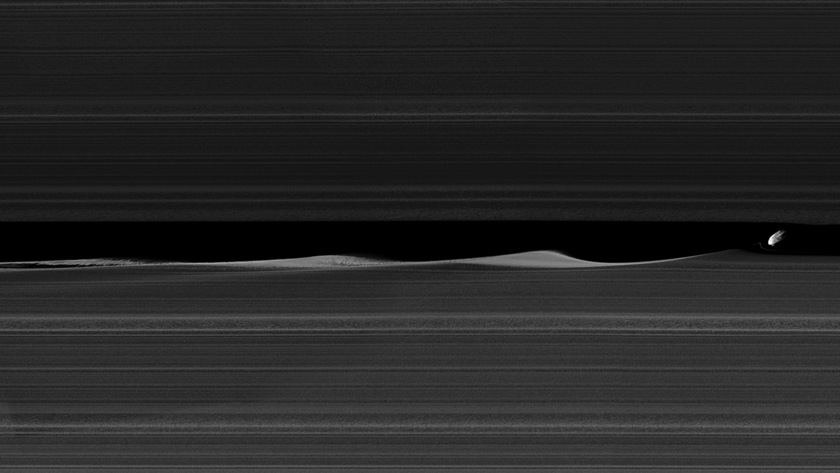 A mosaic of Daphnis images captured on 16 January 2017 by the Cassini spacecraft.

Since earlier this year, I've been following the Twitter account @RawCassini, created by Kevin Gill. (I only recommend this if you use an app like TweetDeck to filter your feed; personally, I created a special "OMG Cassini" column just for this account.)

Here are a few more raw moon images that have recently caught my attention. Enjoy them while you can! In a mere six months, the Saturn system goes dark. 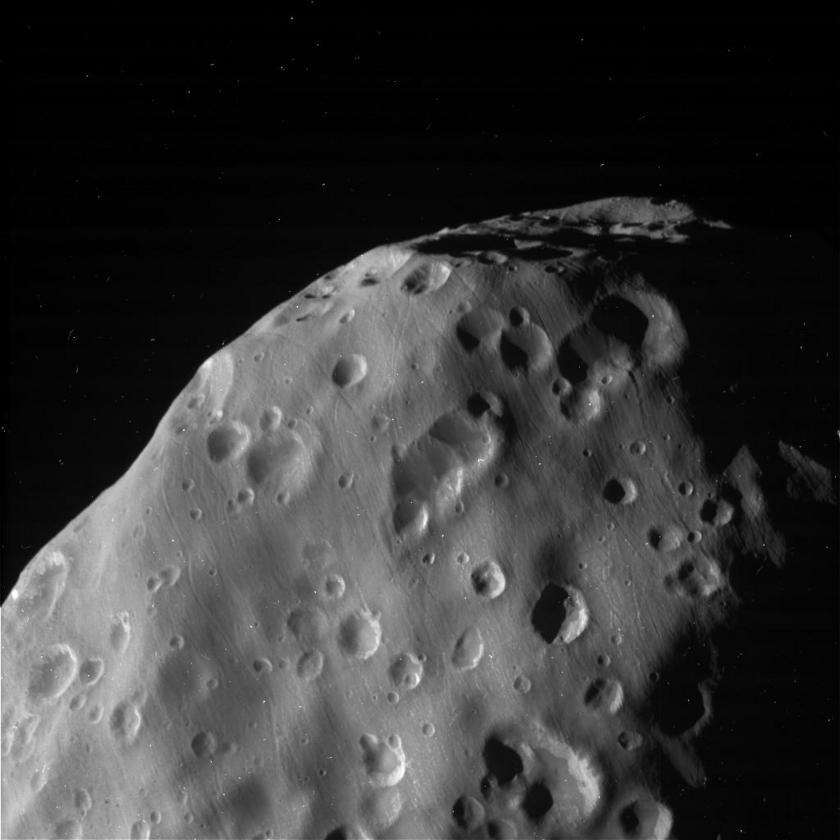 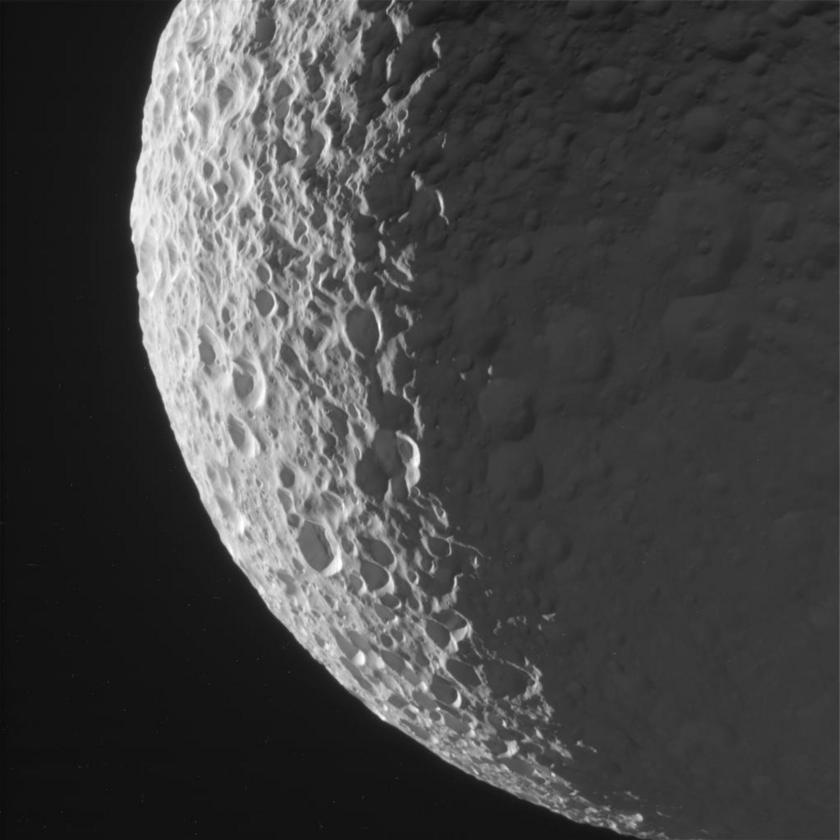 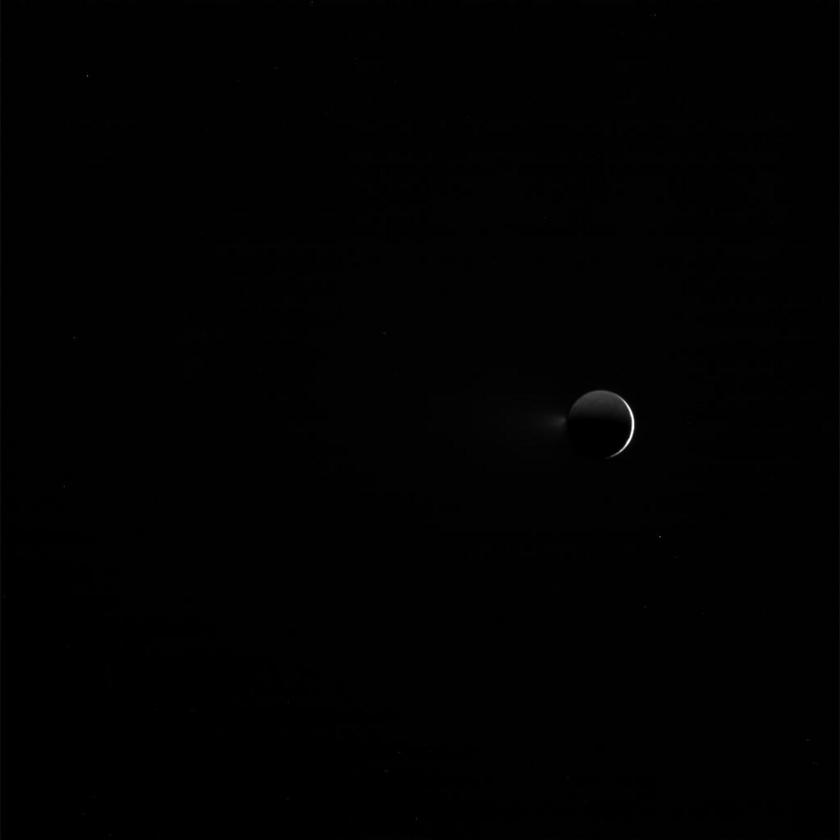 Enceladus imaged by Cassini on 8 February 2017.

Can't you recognise your basic flying saucer when you see one? Either that or they released their April 1 image by mistake! But they got too carried away. The ridge is more than 5km high. No one will believe that.

The Pan 1 & Pan 2 images are awesome. Thanks for sharing! Image 1 looks to be showing a train of impacts minutes apart with each impact coming in a straight line thus (follow the 3 layering rings) making for an off center impact allowing for rotational increase. With the increase gravitational caused accretion pulled the material into a ring eventually and as for the apparent settling structure cause, I have no idea. Solar wind sculpting may be the main factor for the current shape.

In the Pan images the ridge is not circular if you would look down on the poles, but seems to be a hexagon. I cannot imagine a gravitational cause for this (particles from the ring simply falling on the equator), because then it would be circular. Could it be that the particles of the ring of Saturn are static and that what you see is "static cling"? And could it be that Pan has a magnetic field (maybe induced by the strong field of Saturn) that would cause the static particles to accumulate in the form of a hexagon?

As Spock would say, simply fascinating.

These Cassini images are such a treasure. I've enjoyed learning about Saturn and especially the moons of Saturn. Enceladus is just incredible. Granted, it is a long-shot that life in some form may exist in the seas of Enceladus. The possibility that there is life, though, has really inspired me. I've been inspired to start writing on topics around Enceladus and astronomy as well. I hope that we someday have a mission to Enceladus similar to the upcoming Europa Clipper mission.