This company launches balloons to the edge of space. Will the business float?

On a Thursday afternoon in Tucson, Arizona, Jane Poynter strolled confidently through the headquarters of World View, a company that could one day launch people to the edge of space with giant balloons.

Poynter, who co-founded the organization in 2013, is the CEO. She led a small group of reporters to a second-story window overlooking an impossibly long table where balloons are stitched together.

Just a year ago, the table wasn't here, and neither was World View. On Google Maps, the company's address still shows a plot of desert scrub. In January 2016, World View signed a deal with the Pima County government to build a new headquarters here, just south of Tucson International Airport.

Now, the company is open for business, preparing to launch robots—and if all goes well, people—from their facility to the stratosphere.

It's a delightfully Tucson concept. World View seems to personify the city's unique blend of space science and artistic flair, with just a hint of desert quirkiness.

Will the business float? I attended World View's recent headquarters dedication ceremony to find out. 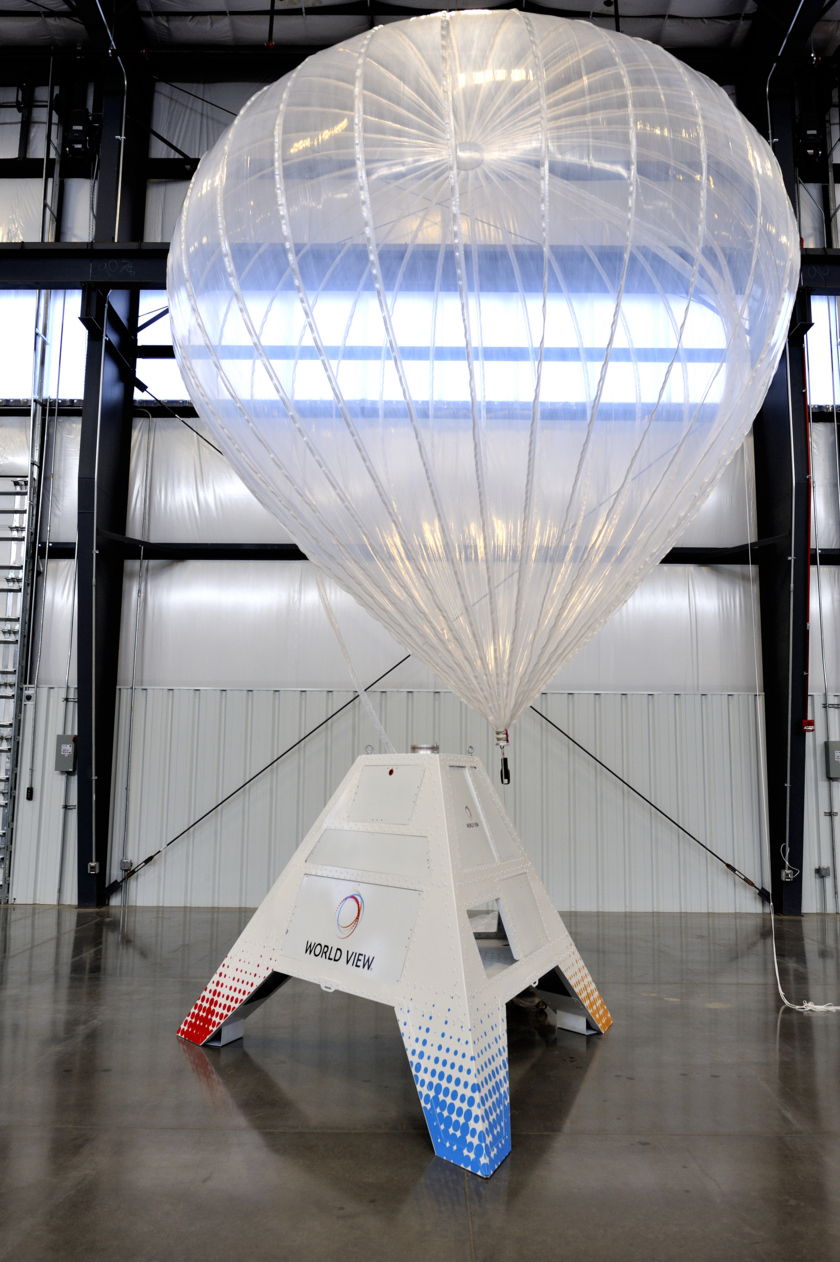 A World View Stratollite, with a small-scale balloon.

World View's core balloon product is the Stratollite, which carries uncrewed payloads into the stratosphere, a region roughly 15 to 50 kilometers above Earth's surface. For comparison, commercial jets cruise up to about 12 kilometers, space begins at 100 kilometers, and the International Space Station, in low-Earth orbit, zips around the planet at about 400 kilometers.

Sending balloons into the stratosphere isn't new, but World View is adding the capability to loiter over the same spot for weeks at a time. The company is tight-lipped on exactly how its technology works, but generally speaking, Stratollites steer on stratospheric winds, dipping and soaring in circles to stay over the same area. Some flights involve parafoils, and the composition of the air inside the balloons can be changed to act as a ballast.

The Stratollite payload module is a pyramid-shaped, and about as tall as a person. It can carry a wide variety of instruments, seemingly limited only to a customer's imagination. World View's listed examples include ad-hoc communications relays, severe storm monitoring, high-resolution surface imagery, and space science.

Conventional satellites can, of course, do all these things. But for some applications, Stratollites have advantages over their in-space counterparts. A satellite in low-Earth orbit might only pass over a particular spot once or twice per day. Geostationary satellites can hover in one place, but they do this by matching their orbital period to Earth's rotation, which requires an altitude of about 36,000 kilometers. From that height, you get pretty, full-globe views of the planet, which is great for watching global weather patterns but less helpful for detailed views of particular locations.

A stratollite can also be prepped and launched quickly, without the lead time needed to book a rocket flight. Payload sizes are flexible, since everything doesn't have to be bundled up into a nose cone.

The payload also comes back for reuse. When it's time to come home, the Stratollite instrument module rips free from its balloon and glides back to Earth under a parafoil. The balloon is intentionally damaged in the process, and floats back to Earth for recovery and recycling.

"It's very old-school, but I love simplicity," Poynter said.

World View was originally trying to build on the groundwork of Eustace's flight by offering tourists rides to the stratosphere in pressurized capsules.

"We were working really hard on human flights," MacCallum said. "We began getting a lot of calls saying, 'Hey, can you fly my payload? Can you fly my research instrument?'"

The World View team assumed the market for balloon-based stratospheric payloads was saturated, but it wasn't.

"It turned out that ballooning had been in stasis for the most part," MacCallum said. "Nobody had applied modern solar power technologies, modern battery technologies, 3D printing, and modern design techniques to figure out how to actually control and pilot a vehicle in the stratosphere."

Bolstered by an early NASA contract to fly some science payloads, the team refined their Stratollite concept. It has now evolved into the company's core product, and will remain so until human flights are ready to take off. 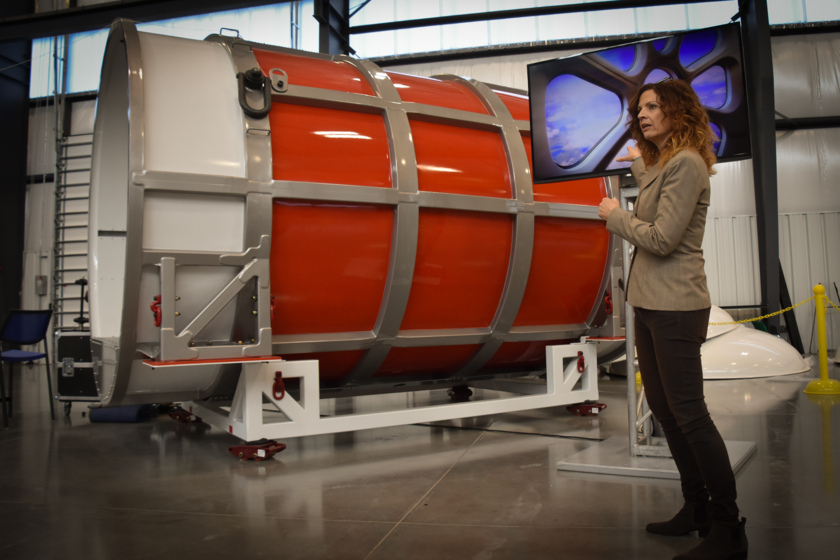 World View founder and CEO Jane Poynter shows off a prototype of Voyager, which is designed to carry eight people into the stratosphere.

Sitting on World View's factory floor is a sort-of oversized red culvert big enough for eight people—six passengers and two pilots. This is a prototype for Voyager, which will one day carry humans high above the Earth.

A Voyager ticket currently costs $75,000, but the company eventually hopes to cut that figure by up to two-thirds.

"Voyagers," as the paying customers are called, begin their ascent at sunrise. Through large windows at both ends of the cylindrical capsule, they'll see darkness in one direction and sunlight in the other, as daybreak sweeps slowly across the ground. Flights will last several hours, at altitudes of up to 30 kilometers—high enough to see the blackness of space and curvature of the Earth. Voyagers will have a standard suite of creature comforts available, including a bathroom, and—naturally—a bar.

World View is not publicly committing to a timeline for when they'll be ready to fly tourists. Poynter said she hopes to get the Voyager prototype aloft as early as this year, without anyone aboard. Eventually, two pilots—likely former astronauts Mark Kelly and Ron Garan—will take Voyager on a test flight. Kelly is a World View co-founder and the director of flight crew operations, and Garan is the company's chief pilot.

"Somebody's gotta do it," Kelly told me, referring to the first crewed flight. "So it'll probably be him and me."

Kelly and Garan flew together on space shuttle Discovery in 2008, on a mission to deliver the Japanese Experiment Module to the International Space Station. At the World View dedication ceremony, Garan showed off video footage from the mission, including the crew playing "The Blue Danube" over the radio after Discovery undocked from the ISS. The song, forever associated with spaceflight by the film 2001: A Space Odyssey, seems to be World View's unofficial theme song; it plays in a video introducing the Stratollite, and during the dedication ceremony, a group of musicians from the Tucson Symphony Orchestra played the tune live with the same video.

When I spoke with Kelly, he seemed relaxed and in good spirits, as we sat in lounge chairs on the facility's top floor looking out over a large, concrete launch pad. Stratollites can launch from here and fly to their destinations on stratospheric breezes, or be deployed directly in the field. Voyagers will launch exclusively from Tucson and land on a conventional runway. Nearby Tucson International Airport is one possibility, but another candidate landing strip is in nearby Benson, where air traffic congestion is lighter.

At first, I had assumed Voyager would simply return to its launch pad. After Kelly corrected me, his astronaut-pilot persona kicked in, and with a slight grin he wondered aloud whether a return to the launch site might indeed be feasible.

"We're not going to have much of a landing roll," he said, his voice trailing off in thought. "With the space shuttle, we did not need 15,000 feet of runway to stop on. On my last flight, I stopped at about 6,000 feet. However, having said that, it's always nice to have a lot of runway in front of you ..."

Three of World View's four co-founders have deep ties to Tucson. Kelly is married to Gabrielle Giffords, the former Arizona congresswoman who was severely injured in a 2011 assassination attempt. Poynter and MacCullum, in addition to having previously co-founded Paragon, were crewmembers on the first Biosphere 2 mission, a two-year experiment to simulate deep space habitation in a self-sustaining ecosystem. The sprawling Biosphere facility, located an hour north of Tucson, remains a part of local lore.

Nevertheless, World View's presence here wasn't a given. The company conducted a nationwide search for places to build their new facility, and the finalists included Spaceport America in New Mexico, and Jacksonville, Florida.

"I've been here for thirty years," Poynter said. "I actually consider myself a native now, so I'm really a Tucsonan. It would have been really heart-wrenching if we'd had to move."

Tucson was able to secure World View's presence—and the 400 jobs the company says it will bring—after the Pima County Board of Supervisors agreed in January 2016 to build the company a $15 million facility on county land now known as Spaceport Tucson. The Arizona Daily Star reported World View will pay the county back over 20 years, shelling out a total of $19.2 million.

In April 2016, the conservative-leaning Goldwater Institute sued the county, claiming the deal violated local and state laws dictating how public money can be spent on private firms. Last month, a county judge sided with Goldwater and voided the agreement.

The facility, of course, is already built, and Pima County is appealing the ruling. World View is not listed as a defendant in the lawsuit, and company officials say they are confident a fair deal can be arranged, should the appeal process fail. 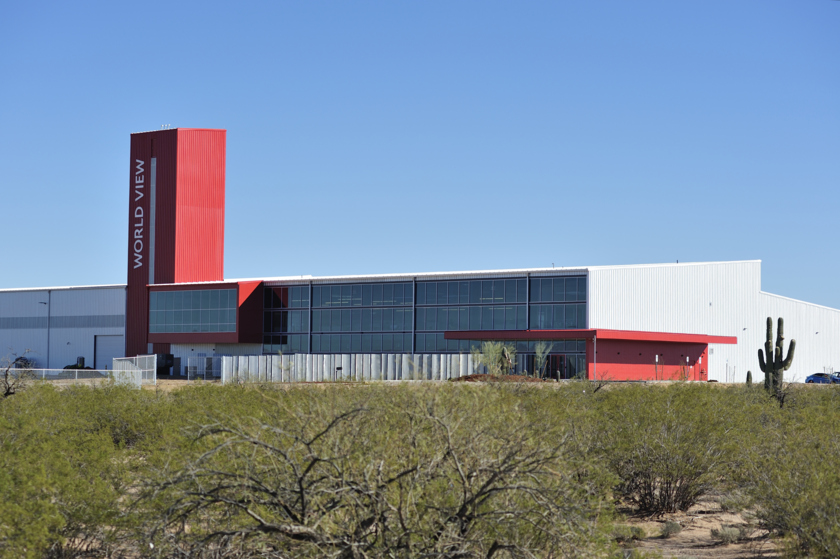 World View's new Tucson, Arizona headquarters manufactures balloons, conducts research and development, and serves as an operations center. It will also be the starting point for crewed Voyager flights and some Stratollite flights.

Will the business float?

Can World View live up to expectations, and thrive in an under-utilized region of Earth's atmosphere?

In the short-term, the company is betting on Stratollite program, which could potentially see an influx of customers due to attractive pricing.

She predicts the company will eventually consist of a fifty-fifty split between Stratollites and Voyagers, though she didn't specify whether that meant operations, revenue or both.

Judging by the flock of VIPs who attended World View's dedication ceremony, the company has support at the local, state and national levels.

One of the evening's final speakers was Alan Stern, another World View co-founder and the principal investigator of NASA's New Horizons mission to Pluto.

Stern reflected on the Pluto flyby, describing how it showed "what human beings can do, what our country can do, and what technology can do," he said.

"I think the stratospheric applications we're embarking on are going to change people's lives and do great science in just the same way. But not from 3 billion miles away."