On Friday, January 20, at 12:00 p.m. EST, Charles Bolden will resign as NASA administrator.

He was appointed by President Obama in May 2009 and confirmed by the Senate that July. Bolden didn't publicly express any desire to stay aboard for a Donald Trump presidency; nor has he apparently been asked to stay. Therefore, as is customary, he will leave office the moment the next president is sworn in.

How long will Lightfoot serve before a new administrator takes office? It's impossible to say, but if history serves as a guide, it could be a while before a new boss takes the helm. 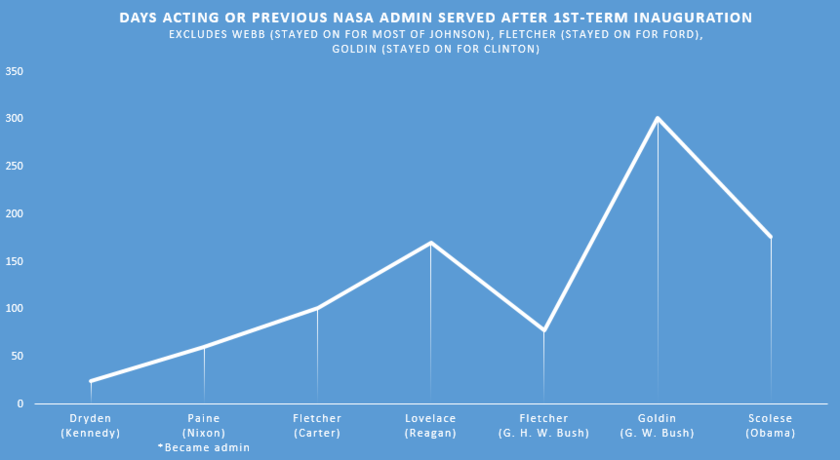 Waiting for the new boss

When John F. Kennedy became president in 1961, Hugh Dryden only served as acting administrator for 24 days until Kennedy appointed James Webb to run the agency. The duration acting and previous administrators have spent in office at the start of a president's first term has been creeping up ever since, culminating with Christopher Scolese, who served President Obama for 176 days before Bolden took office.

There have been 10 presidents in office since Dwight Eisenhower, who oversaw the creation of NASA in 1958.

That leaves just three clean-break presidential transitions where a new acting NASA administrator took over on day one; Lightfoot's tenure will mark the fourth. The other three were Hugh Dryden for Kennedy, Alan Lovelace for Reagan, and Christopher Scolese for Obama. 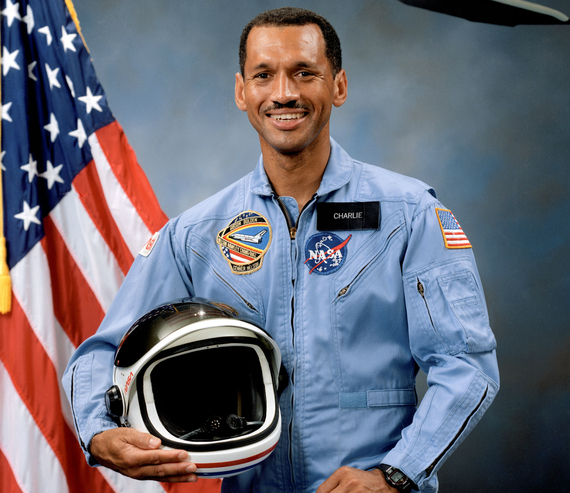 Trump's choice for NASA administrator must be confirmed by the Senate. If either Trump or the Senate stalls, how might that affect NASA's long-term plans?

In part 3 of our Horizon Goal series, I described how the 176-day delay on Bolden's confirmation may have contributed to resistance the Obama administration encountered when it canceled George W. Bush's return-to-the-Moon Constellation program.

The Congressional Budget Act requires the president to submit an annual federal budget request to Congress on or before the first Monday in February. The budget is a common place to introduce major program changes, and in Obama's case, it was the February 2010 budget that canceled Constellation.

The independent review panel assigned to evaluate Constellation would have ideally been convened after Bolden took office. But after a few months of delays, the panel was finally commissioned in May 2009, just before Bolden's nomination. By the time Bolden took office, it was July, and the review panel's report wasn't issued until October.

That left just three-and-a-half months to orchestrate major program changes before the next budget release. Due to a political miscalculation, the short turnaround time, or some combination of both, the Obama administration did not corral widespread support prior to announcing Constellation's cancellation. The proposal was met with immediate backlash, culminating with the Congressional compromise that created the Space Launch System.

Therefore, if the Trump administration plans to introduce major NASA changes, it could be advantageous to get a new administrator in office sooner rather than later.

Charles Bolden leaves NASA after 2,744 days. The NASA administrator record holder is Daniel Goldin, who, in the course of 3,517 days, served both Bush administrations and the entirety of the Clinton presidency.

Bolden's stint as administrator is the third-longest in terms of consecutive days, and the fourth in terms of total days.

If you include the National Advisory Committee for Aeronautics (George W. Lewis was head of NACA from 1919 to 1947), it was more than that... Which reminds me....NACA's, and therefore NASA's centennial was two years ago. Why didn't anyone notice?

Thanks for the blog article ! Its hard to follow politics in my country (France) let alone another one, but here's an outsider's impression: Charles Bolden who is associated with SLS, could hardly stay in case of its cancellation and it wold be humiliating for him anyway. So his departure is a predictive element in itself. Also for any rupture of policy, Trump would need "his" man to win over internal resistance. Your four-year US presidential mandate is short and any new space policy (Mars ? Moon ?) must start early to be effective. As I understand your, the earliest possible is February 2018 federal budget. In-between-time, SLS would be discretely slowed down to free up money. Maybe not so discreetly considering the new potus personality ! What's more, there is a clearly-stated preference for commercial space flight which sets Nasa in its "agency" role (as opposed to an engineering and construction role). Anyone doing Nasa-ology could get clues by seeing which engineers and administrators are now leaving Nasa, where they go, how Nasa job offers evolve and whether well-qualified people are accepting them. As a question: Since they've had over two months to think find candidates, why go through the "acting administrator" stage instead of putting in a permanent administrator immediately ? It would be fair to imagine that someone has already been chosen, accepted the job, and there is just some window-dressing to do first. Hoping all goes well !

Maybe it is just me, but Bolden seems like one of the worst Administrators ever as far as planetary science. He famously said no more flagship missions and seemed to do his best to try to divert funds away from planetary missions into manned missions, some of which sure seemed like pork. The damage he has caused will hamstring planetary science for years, maybe even for a generation. Not only is there a dearth of new missions, but the Mars 2020 rover will be lugging around the pointless MOXIE instrument over the surface of Mars instead of carrying something like a new SAM instrument. Good riddance Bolden and let's hope we get a scientist as Administrator instead of yet-another manned mission advocate.