Review: Arrival’s surprising message of happiness and hope for humanity

If you haven’t seen Arrival yet, but plan to, I recommend you don't read any further. The less you know about the plot, the more the movie will have a chance to impact you uniquely.

Having said that, there are spoilers ahead.

Based on the trailer alone, I thought Arrival was mostly about a band of alien ships arriving on Earth, our resulting attempts to communicate with them, and the threat of a global war. This is certainly the core of the film, but the storyline shares equal time with a second plot: the personal story of Louise Banks, a brilliant linguist played by Amy Adams.

It's risky for a sci-fi movie to pull the viewer into an unexpected commentary on the human experience. If the message feels heavy handed, hastily constructed, or cheesy, it can sink the rest of the film.

For me, Arrival didn't do that.

Banks' backstory surrounds the death of her daughter from a rare disease, and a marriage that fell apart from the resulting strain. The movie later reveals that what we assumed were flashbacks are actually foreshadowing; the aliens give her the ability to see the future. All of those distressing moments in her life haven't happened yet.

At the end of the movie, after Banks saves humanity, she faces a decision: Should she begin the relationship that leads to her daughter's birth, and premature death? Why, knowing the grief that lies ahead, would she choose the same future?

Putting aside the ethical debate of whether to give life to a human being doomed to prematurely suffer and die, the movie affirms a truism that I have only gradually come to realize myself: Life is not a means to an end.

Happiness, instead, is often found in small, unexpected moments, and a major part of being happy is the ability to recognize and embrace those moments when they occur. Through final flash-forward scenes, we see some of the warm moments that await Banks and her family-to-be, which juxtapose the sadness and lead her to choose the same path.

Whether or not director Denis Villeneuve set out to make this point explicitly—or whether it was expressed in the original short story by Ted Chiang—I'm not sure. But the sentiment, or something close to it, is surely there. 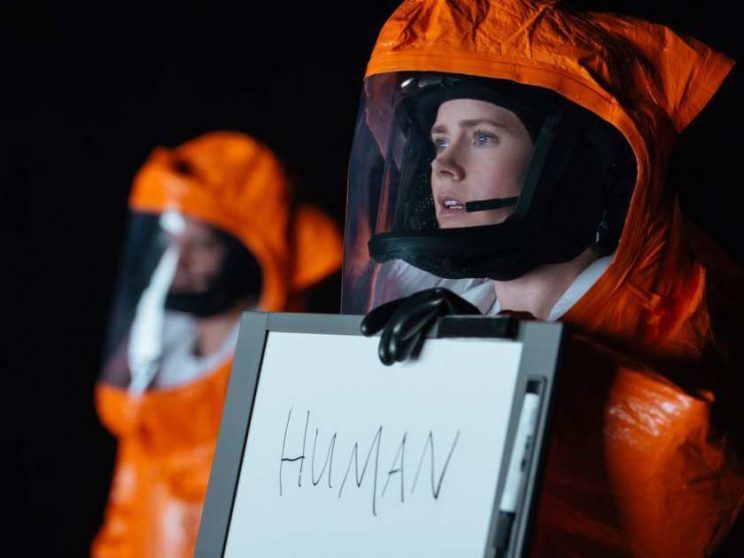 Though Arrival's creators couldn't have predicted the world's current geopolitical state when they were making the movie, their release timing was stunningly prescient.

The aliens arrive in twelve, large, cylindrical probes scattered across the globe. The United States, China and Russia each play host to a ship, forcing the world's superpowers to grudgingly coordinate their efforts to make contact.

But a problem soon becomes apparent: Who speaks for Earth? And what happens if one nation makes an impulsive move, endangering the rest of humanity? It's an interesting question, and I don't recall any debate moderators asking Hillary Clinton and Donald Trump how they would handle such a scenario.

In a way, Arrival's plotline is more plausible than that of The Martian. Don't get me wrong; I thought The Martian was fantastic. But whenever I saw the beautiful spaceship Hermes, I wondered who had tripled NASA's budget. And now, with another possible moon-versus-Mars, commercial-versus-government human spaceflight scuffle on the horizon—as well as a potential funding slash for NASA—it's hard not to feel pessimistic about the chances of sending astronauts to Mars anytime soon.

Though Arrival is based on the unlikely probability that we will be contacted by aliens, it plays on the hope that a single precipitating event could alter the course of human history—hopefully for the better.

This also happens to be one of the reasons we explore our solar system and the universe. Could the discovery of past or present life beyond Earth have the same effect?

There's only one way to find out.

“In a way, The Arrival's plotline is more plausible than that of The Martian.” Actually, I found the plotline confusing as hell, at least all the flashbacks (or were they flash-forwards?) about the daughter. (More annoyingly, there are lines in the trailer which are not in the finished film.) Also the way in which they decode the aliens’ written language can best be described as simplistic and naive. First of all it is not clear at all from the film how long that process took. Was it days? Weeks? Months? Conveying that kind of passage of time was NOT one of the movie’s strong points. I mention that because it took DECADES of work to decode cuneiform, the ancient written language of the Sumerians and others in the Middle East. I also noticed that the team had isolated words for “man” and “woman”. How did they achieve that when it was not at all clear that the aliens even have sexes, and therefore a need to distinguish a man from a woman? I mention THAT because the aliens apparently don’t have all the divisions which we have like multiple nations. (Which, BTW, is not necessarily good news about them. After all, nowadays there is only one SPECIES of human even though there were once several. Or to boil it all down to one question: just exactly what did happen to the Neanderthals?) More puzzling though is why they need they need to go through that process at all. Why haven’t the aliens bothered to learn Earth languages, especially when they are the ones with the super-advanced technology? And if they have not bothered to do so, how is it that they know ANYthing at all about us—beyond the most basic and simplistic of observations? I was also surprised to find that a theoretical physicist was put in charge of one of the teams when a biologist or engineer would (just MHO) have seemed a more logical choice.

Just returning from having watched it. Still on a cloud. Mesmerized. Indeed, how to make a feel-good movie without annoying - me? Hire Monsieur Villeneuve. Countless of what were simply the right choices. Suggestion for answers to Stephen's questions - and I'm not trying to persuade you, even though if I'd start with all the things that are very wrong with other films... starting, in fact, with 'The Martian' (film, not book; I think Ridley Scott was not the right choice for the job -- 8-O *sacriledge* ). Interpreting and time-frame: somehow I can't really imagine this film working as a mini series, even though I like that format. And within movie-frame there have to be choices made. One would be the well-known date'n'time in the bottom corner, which would have likened it to the X-Files. Or one can see if the audience walks along and fills in the gaps; we just don't know, so each can make up their own mind about the time passing. Another restriction is plot-drive. The films not solely about the interpreting process. The only thing I thought was a little odd, was how the genius linguist would *start* by writing down 'human' and their names in English. Different sexes: you said it, not clear. Doesn't mean there aren't any. For all we/the communications team know, they could be Abbott & Costella. Divisions: again you said it, *apparently*. We don't know. Just because they look the same to us and are apparently nudists doesn't mean that to them they have as distinguishing features as to us are our faces. To us all gnus look the same. Ask a gnu what it thinks about that. Or an octopus, for that matter. Why going through this process: we don't what they know about us, how they know, and how they arrived. I agree, they must have known something, otherwise they wouldn't know that the gift is in fact a gift, not something we'd reply to with, 'already got that one.' But learning. A gift in itself, even if that now might sound cheesy. ...

... oops, that went a little long. Sorry, loved the movie. Plus, Banks insisted on engaging them personally. And: there was a moment when Donnelly was puzzled over the alien's inability to follow simple algebra, but being real fit with more complex stuff. Perhaps simpleton-language, the languages of humans, simply are not complex enough for them. And they also might prefer learning together with the alien (humans, in this case). Another gift. Theoretical physicist: he didn't head the team. The military did. And somone being really good at maths, and really good at physics really should be on the team. But a biologist, too, I agree. In any case I'm really happy about this film, and this director. I'll probably watch it again very soon. Btw., I disagree with The Hawk: I believe that if aliens ever came here in person, chances are, say, 98% that they come with very good intentions - because they must have given themselves the time to find out *how* to get here...

p.s. correction: doesn't mean that to them they have'NT as distinguishing...

I had thought Louise was using heptapod language to access her past memories of Hannah, and discover foreshadowings. Your explanation makes much more sense (if we put aside annoying trifles like 'causation')

The scenes with her daughter are neither flashbacks nor flash forwards. All of the events are concurrent. That is one of the key messages the aliens deliver. When they say "There is no time." it is taken as an implied threat. It is later explicitly stated that the message is actually "There is no linear time.". As such, there is no decision about whether or not to face pain to come because she is already facing it even as she asks the question. For me the key to enjoying the movie was understanding that the actors are not the stars. The stars are the concept, and it's execution. The question then becomes, how do you portray a concurrent, non-linear story in a strictly linear format? The answer if course is... Brilliantly.