To the moon, via the space station? A Q&A with Orbital ATK

It's been two years since the spaceflight company Orbital ATK lost one of its Antares rockets in a jaw-dropping accident on the Virginia coast.

On that day, a liquid oxygen turbopump feeding one of the rocket's Soviet-built AJ-26 engines exploded, sending the rocket plunging back to the launch pad seconds after liftoff. The cargo, an International Space Station-bound spacecraft named Cygnus, was destroyed in the ensuing fireball.

Orbital decided to swap the AJ-26 for a modern Russian engine, the RD-181. While the company was making the switch, it outsourced two Cygnus flights to United Launch Alliance.

Assuming Hurricane Nicole Cooperates, the first overhauled Antares rocket will blast off from Virginia as soon as 8:03 p.m. EDT Sunday (0:33 UTC Monday), carrying a Cygnus freighter packed with 2.4 metric tons of science and supplies to the ISS.

Ahead of the return-to-flight mission, I caught up with Orbital ATK to get the latest details on Antares, Cygnus and the company's future plans. An Orbital representative collected these answers from official sources across multiple divisions of the company. 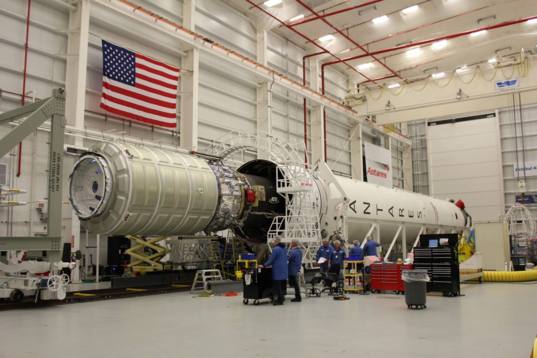 Orbital ATK technicians attach a Cygnus spacecraft to its Antares carrier rocket ahead of the OA-5 return-to-flight mission.

It's been two years since the Orb-3 explosion. What's the mood of your workforce like as you prepare for return-to-flight, and how has that changed since the initial accident?

The workforce was understandably disappointed after Orb-3, but by the next day, Orbital ATK had announced a plan to continue to deliver on our cargo resupply contract with NASA while implementing several upgrades to Antares. That inspired confidence in the workforce, and everyone has been working very hard for the last two years to execute this plan. It has been challenging, and many dedicated employees have worked long hours and weekends to get us to this point, but now everyone is very excited to see Antares launch again.

During these past two years, you formed partnerships with ULA to keep Cygnus flying, and Energomash to supply the RD-181 engine. Has it been a challenge to set all of that up quickly?

It was important to us to maintain a steady cadence of Cygnus deliveries to the station while simultaneously upgrading Antares. It was not easy to do this, and we appreciate the support our partners provided to help us execute this plan.

How difficult has it been to adapt an existing launch vehicle to new engines? Can you talk a little bit about that process?

The RD-181 engines were actually nearly as close to a drop-in replacement as we could find. There were still many changes required to other vehicle systems that interface with the engines such as the propellant feedlines, the avionics systems, structures and the core. We were able to accomplish this successfully culminating in a hot fire test of the entire stage with the new engines in May and are now ready for launch in just a few days.

What have you learned since test-firing the rocket stack on the pad with the RD-181 for the first time?

The stage test configuration included a substantial amount of instrumentation and provided a significant amount of data for how the entire system works together, including the performance of the engines, core and avionics as well as tanking/detanking and interfaces with the pad. Our engineers have reviewed all those data in great detail. There were no significant surprises providing the confidence we needed to move forward to launch.

Have you made any other modifications to the launcher, other than the engines?

The only significant changes were those made to the avionics, structures and core stage necessary to support the new engines. There are some very minor modifications to other systems, but those were product enhancements that have always been part of our plan.

What about the ascent profile of the vehicle? Is there a timeline available for key events like staging? And how has that changed from earlier launches?

Has your pad flow changed dramatically, in terms of Cygnus integration and getting the vehicle assembled and rolled to the pad?

No, there have been no changes to pad flow.

You recently debuted your enhanced Cygnus vehicle, and it sounds like it's performing very well. What kind of results are you seeing from the upgrades?

As a result of our enhanced Cygnus vehicle, we have increased cargo capacity by 500kg-800kg. OA-4 and OA-6 had smooth missions with no anomalies.

Orbital is one of several companies currently with a NextSTEP-2 award hoping to build cislunar habitats for NASA's Journey to Mars. Does having Cygnus flight experience help as you approach your habitat design?

Yes, this is a great opportunity to highlight the heritage of our flight proven Cygnus spacecraft for long-term operations in deep space. The technology, together with Cygnus’ modular design that enables it to carry a variety of payloads, makes it an ideal platform for human space exploration. By 2021 we would launch an initial habitat module aboard NASA's heavy lift SLS rocket with a crewed Orion capsule. This mission would serve to prove out the Orion capsule and deploy the initial habitat in cislunar space. When Orion and the crew return to Earth, the module would remain, operating autonomously, acting as a platform for experiments and serving as a destination for future crewed missions.

What are some of the main challenges and differences you'll face if you take a Cygnus-based spacecraft from low-Earth orbit and moved it out to the moon?

Cislunar space, in the details, has somewhat different environments than low earth orbit. The cislunar communications and navigation functionality must be different than in low earth orbit because of the much greater distance to earth. However, even with modifications to Cygnus to accommodate these differences, Orbital ATK believes this is still the most reliable and cost effective approach to an early outpost in cislunar space. This module would augment the Orion vehicle with additional supplies, equipment, and living space, and could provide additional options to the crew during an unplanned contingency.

Do you eventually hope to move Antares into a launch market beyond NASA missions?

Thanks for the great article and update. I am going to be at the launch with the NASA folks, so I am very excited. By the way, who did you interview for the Q&A portion of the article? You should mention that so we know who said it instead of just saying "Orbital ATK representatives"

Good point, Skip -- updated. A company representative distributed my questions to various departments, and these were the official answers that came back. NASA often provides answers to media reps in the same manner.

Thanks for the clarification, Jason. I guess I had never noticed that before.

No questions about whether they're concerned about the reliability of a supply of RD-181s or the political consequences of their use, amid the growing geopolitical tensions with Russia? That's what I was hoping to hear an answer to.