Cargo craft mania! A quick guide to four days of Dragon and Progress at the ISS

Starting this weekend, two spacecraft will perform a choreographed, four-day dance to deliver several tons of cargo to the International Space Station.

The Russian Progress freighter MS-03 launches Sat. and docks Tues., while SpaceX’s CRS-9 Dragon capsule blasts off Mon. and berths Wed.. The two spacecraft will simultaneously be on orbit and en route to the orbital laboratory for slightly less than a full day.

Here’s the combined schedule of events:

The biggest piece of equipment arriving at the station is a new International Docking Adapter, which will be tucked inside Dragon’s trunk. The first IDA was supposed to arrive at the station last year, but was lost during the SpaceX CRS-7 Falcon 9 accident. The IDA is a new docking port built to a worldwide standard agreed upon by all of the major ISS partner agencies. It will first be used by SpaceX's Crew Dragon and the Boeing CST-100 Starliner.

Visiting ISS vehicles currently use a combination of docking and berthing ports. The station's Russian segment uses probe-and-cone docking ports for Soyuz and Progress vehicles, while the U.S. side uses berthing ports for Dragon and Cygnus cargo vehicles. Docking ports allow for quicker crew departures in the event of an emergency, whereas berthing ports require a series of bolts to be installed between the spacececraft and station.

"There’s quite a lot of complexity involved in a docking mechanism," said Kirk Shireman, the International Space Station's program manager, in a conference call with reporters. "It doesn’t look like that on TV, but trust me, it’s very, very complicated."

The port will be installed on the U.S. side using the station's robotic arm, and a spacewalk next month will finish making it operational. 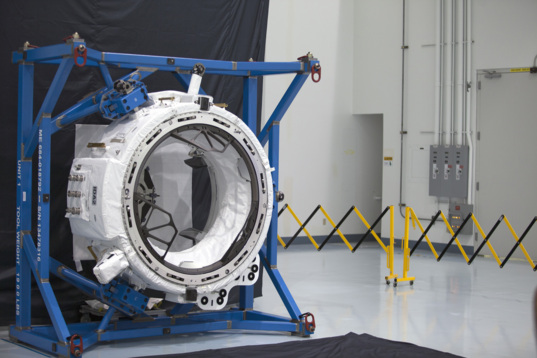 There are also a multitude of science experiments arriving on Dragon—you can find some of the highlights here.

Of particular interest is the the biomolecule sequencer, a handheld device that can sequence DNA, which has never been done off the Earth. The sequencer could have a number of crew applications, but could also be used to analyze DNA-based life on other worlds.

Astronaut and microbiologist Kate Rubins, who arrived on the station last weekend, will test the device. Here she is talking about the experiment:

#AstroKate talks about her launch to space and the DNA sequencing @ISS_Research she will conduct. https://t.co/h7kehYDV6g