It's been a few weeks since LightSail 2 unfurled its Mylar solar sails during a day-in-the-life test at Cal Poly San Luis Obispo. What has the little CubeSat been up to? Here's a roundup of updates that were made in response to the test results, and a look at the project's next steps.

The biggest anomaly during the day-in-the-life test was the booms stopping just a few motor counts shy of full deployment, as indicated by telemetry coming over the air to Cal Poly's ground station. Telemetry also showed that the motor was still active, struggling to push the booms to their imaginary finish lines. This was a potentially dangerous situation—in a worst-case scenario, one might expect smoke to start rolling from the jammed motor—so the team commanded the motor to power down.

LightSail didn't respond, so Ecliptic Enterprises Corporation engineers Riki Munakata and Alex Diaz quickly unhooked one of the four triangular sail sections, opened an access panel in the deployment table and manually powered off the spacecraft.

It turns out the motor count required for a full deployment varies slightly from deployment to deployment. This is mostly based on environmental factors, including how the sail and booms are repackaged after a test. Additionally, all four sail quadrants pull on their adjacent quadrants, but because we aren't testing in zero-G, friction and gravity prevent the sail from working itself into a more relaxed state.

So depsite the motor count, the sail was probably tight enough. The tension on the sails at the end of the deployment range—combined with boom flexure and deployment table friction—was enough to overpower the motor.

The mitigation? To be on the safe side, the team will lower future target deployment counts. We can always incrementally walk the booms out farther.

I can't hear you over this solar sail motor

Regardless of why the motor stopped, LightSail didn't respond to commands in its stuck state. The likely reason? Electromagnetic interference around the spacecraft's aft compartment from the motor itself. Check out where LightSail's antenna is located—it's right beneath the motor and boom spindle: 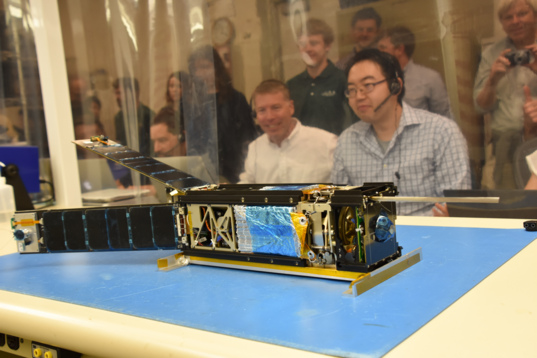 LightSail's antenna is located in the spacecraft's aft compartment, and protrudes perpendicular to the sail deployment motor.

LightSail is able to send out telemetry chirps while the motor is running, but it apparently can't hear anything. This isn't usually a problem, since sail deployment is the biggest milestone of the mission, and a point in time where there's not much to do except sit back and watch.

Rather than solve the more difficult (and costly) problem of the interference itself, the easiest fix is adding a contingency timer to the flight software that powers off the motor after a few minutes, regardless of whether the target deployment count has been met.

During the first phase of the day-in-the-life test, where LightSail sits in the clean room for antenna and solar panel deployment, there was some odd battery behavior.

LightSail has two battery boards holding four cells each—eight cells total. During DITL testing, not all of the cells were initially supplying power to the spacecraft. This was unexpected, but not necessarily a problem; it mostly resulted in a change in understanding about the spacecraft's power system.

However, this behavior also led to the discovery of an underlying hardware problem: one of the eight battery cells' protection circuit has failed.

When LightSail's solar panels receive sunlight, they charge the battery cells. When a battery is fully charged, its protection circuit stops more power from flowing in to that particular cell. An overcharged cell can distend, or in the worst case, catch fire.

The safest fix here is to replace the battery board with the affected protection circuit. Ecliptic has already ordered the new components and expects to have them installed in the next week or so.

I mentioned back in April that LightSail would travel to the Space Dynamics Laboratory at Utah State University for magnetometer calibrations. That test ended up being postponed until after May's day-in-the-life test, so LightSail went in early June.

Prior to that, the spacecraft made another magnetometer-related trip to the Institute of Geophysics and Planetary Physics at UCLA in Los Angeles. At the IGPP, a small, magnetically shielded room is used to block out L.A.'s noisy electromagnetic environment. LightSail was positioned inside a small, gyroscope-looking cage that generated a magnetic field, and then the spacecraft's four magnetometers reported what they saw. 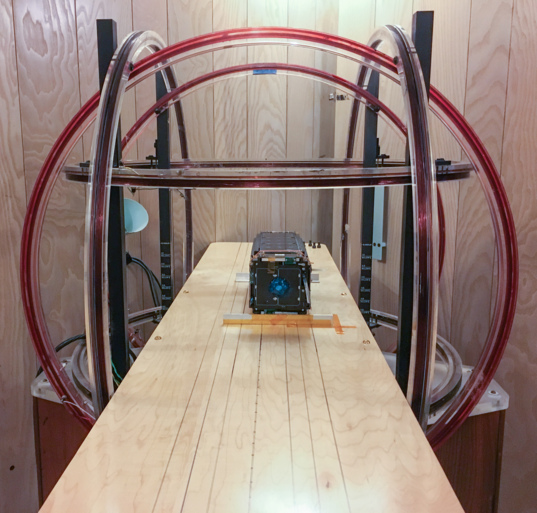 LightSail 2 sits inside a Helmholtz cage during magnetometer calibration testing at the UCLA Institute of Geophysics and Planetary Physics (IGPP).

By comparing LightSail's magnetometer readings with those actually generated by the cage, the team established initial error margins for each magnetometer. Those data will be used to adjust the readings that are received while the spacecraft is in orbit. At Utah State, the process was basically repeated, with an important additional step: LightSail used its electromagnetic torque rods and momentum wheel to push against the generated magnetic field and orient itself!

The magnetic field tests turned up a couple small glitches. It turns out the magnetometer readings are affected by the position of the brushless sail motor, which changed between the UCLA and Utah State calibrations due to the day-in-the-life test. As such, the spacecraft may make one final trip back to UCLA for a final round of calibrations. Since the motor wheel might shake around during launch and deployment, the team is analyzing the spacecraft's attitude control algorithms to determine how best to account for this variable.

In an earlier blog post, I said LightSail 2 would be delivered for integration into Prox-1 in July. That has been pushed to the right a little, and we're finalizing a new schedule. LightSail's timetable depends on a number of factors, including schedules laid out by Prox-1, the Air Force Research Laboratory, and ultimately, SpaceX. We still expect to launch early next year, so we'll keep you posted.

I'm slightly confused by the cleanroom effort. Are you actually debugging things on flight-intent hardware?

I am glad to see progress with the tests with the Planetary Society Lightsail-2 and give my best wishes for a successful flight that will be well documented by the Prox-1. However my main concern now and for some time is that I haven't heard much from SpaceX about when they will get their Falcon 9 Heavy flying. I have tweeted them and sent a message by Facebook about the time of the first flight test but haven't heard back. Their web site says the first flight test will be by the end of this year but they haven't given an update for at least several months and it is already in the latter half of the year. I have seen some posts on their Facebook account etc. saying the date will be this November but again nothing more specific yet especially from SpaceX. How specific have you heard for dates from SpaceX for their first flight test and then first commercial flight or other early flight that will carry the Planetary Society Lightsail-2 and what date are they most recently using and when will that allow the Planetary Society to launch Lightsail-2. Also do you know when SpaceX will give an update when it will launch its flight test of Falcon 9 Heavy or the first commercial flights including the one for Lightsail-2 and when they will update their web site with this information. I would really like to see the Planetary Society succeed with the flight of Lightsail-2 and documentation of it with Prox-1 to get us closer to the time when solar/light sails can go further in our solar system or even out of it but have some concern that it could be delayed because of SpaceX getting the Falcon9 Heavy off the ground and would like to hear some clarity or confirmation from you on this point.

Hi Karen, Debugging and testing takes place in software and on our acrylic-mounted clone, BenchSat: http://www.planetary.org/explore/projects/lightsail-solar-sailing/images/benchsat.html The flight unit has to pass system tests (like sail deployment) and go through calibrations (magnetometers, for instance). Even large NASA missions require the flight unit to pass certain system tests. Changes are first checked out and tested on BenchSat before implementation. Doug: We don't get much more insight into SpaceX's schedule than the general public, since we're riding along for free through Prox-1 and the University Nanosat Program. We're a secondary payload of a secondary payload, if you will. In general, the team tries to use this to its advantage -- if our payload delivery date pushes to the right by a couple months, that's another couple months they can work on the spacecraft. But as of right now, early 2017 still seems to be a reasonable launch date estimate. We'll let you know as soon as we hear more, and don't worry -- the spacecraft will fly, eventually. Jason