With retry scheduled tomorrow, NASA and Bigelow say BEAM will work—it's just a question of when

During a press teleconference with reporters this afternoon, officials from the agency and Bigelow Aerospace said they were confident the module was going to expand—it's just a question of when.

Then, astronaut Jeff Williams started bleeding station air into the module. BEAM has its own set of air tanks, but NASA wanted to start with a more controlled expansion to minimize the amount of force the module imparts back into the station. BEAM's stored air supply will eventually be used at the end of the process.

The procedure is supposed to look like this: As air goes in, pressure rises. The module expands, which increases volume and decreases pressure. After Williams does that a few times, BEAM should be fully expanded, using just 10 percent of the air required for full pressurization.

But yesterday, BEAM didn't expand very much, and the pressure didn't drop the way models said it would.

Essentially, NASA and Bigelow must decide fast to introduce into the module—and, how much—to get BEAM safely unstuck.

Before launching into space, BEAM was packed in its stowed configuration for 15 months, said Bigelow Aerospace in a Facebook post. That's apparently 10 months longer than planned (due to SpaceX's loss of a Falcon 9, which threw the company's schedule into disarray). It could be that the module material—which acts a little like memory foam—is rubbing more tightly against itself than expected.

"The primary force that we believe we're working against is friction forces between the fabrics," Crusan said. "There's multiple layers of friction that could occur at the different levels of the module." 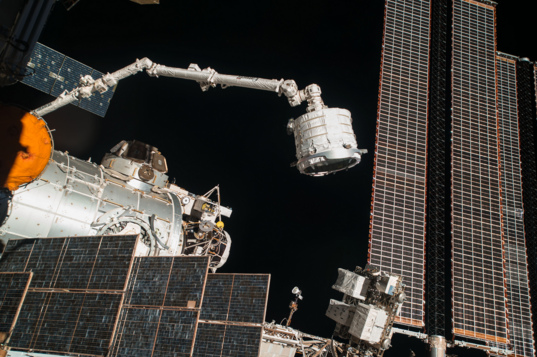 By way of the station's robotic Canadarm, BEAM is transported from SpaceX's Dragon capsule to the Tranquility module on April 16.

If the module doesn't expand properly tomorrow, NASA will probably depressurize it and wait a few days. On Monday, the station's robotic arm is being used to work with some nearby CubeSat hardware, and the agency doesn't want a partially expanded BEAM hanging out nearby.

In the meantime, NASA and Bigelow say the crew and station are safe. Lisa Kauke, the program manager for BEAM at Bigelow, said the models being used to regulate BEAM's pressure during expansion err on the side of caution.

"That conservatism in the model put us in a place yesterday where we were seeing that the reality of the model might not quite match up," she said.

In its Facebook posting, Bigelow said it fully expected deployment to occur one way or another. It could take NASA "a number of weeks to select the best approach to take," the statement read.

"We're very confident that we will get it fully expanded out at some point in time, whether that will be tomorrow," Crusan said. "It's just understanding the forces that it takes to get it to expand, and that's what we're walking through in a very careful and measured way."