NASA and Bigelow Aerospace weren't able to get the space station's newest module up and running this morning.

Astronaut Jeff Williams spent about three hours carefully bleeding air into BEAM, the Bigelow Expandable Activity Module. But the module, which expands to four times its stowed size, barely budged. Bigelow reported internal pressures were running a little high. I had previously reported expansion was expected to take about 45 minutes—half of a single ISS orbit.

An expansion gif. You can see it grew in diameter, but not length: https://t.co/zEQnrVTSnA pic.twitter.com/MXZklJKdij

"Unfortunately we're going to have to stand down with the BEAM operations today," radioed astronaut Jessica Meir, who was on console as CAPCOM today in Mission Control Houston. "We've been assessing all the parameters here from the ground, and due to our set of no-go conditions and not seeing any noticeable movement, we're going to have to reassess further from here."

NASA had previously planned a post-expansion teleconference with reporters after the expansion. That was called off, and NASA issued this statement:

NASA and Bigelow Aerospace are working closely to understand why the module did not fully expand today as planned. Engineers are meeting at the Johnson Space Center in Houston to discuss a path forward for the Bigelow Expandable Activity Module (BEAM). They are evaluating data from the expansion that has occurred thus far. If the data supports a resumption of operations, another attempt to complete the module’s expansion could come as early as tomorrow.

With the team focused on analyzing BEAM’s status, a previously scheduled teleconference for Thursday, May 26 at 10 a.m. EDT has been postponed until we have more information available to share. NASA will send an updated media advisory when the next step for BEAM operations is decided upon. 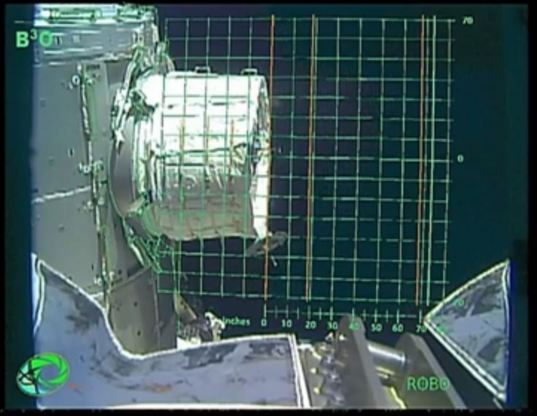 This screenshot from NASA TV shows a grid overlay used to track the expansion of BEAM. When expanded, the module should reach the right edge of the grid.

Clearly things didn't go as planned, but NASA always errs on the side of conservatism when dealing with in-space operations. So we'll have to wait for more updates and see if they make another attempt tomorrow.

The wet workshop was and is the ultimate reuse concept. For want of a few million more dollars Skylab would have kept the Saturn V second stage attached to the third stage dry workshop and put up a larger space station than the ISS in one afternoon. The blow-up tent is part of the cheap and nasty flexible path that continues to cripple any meaningful progress since Apollo.