A expandable habitat shipped to the International Space Station last month will slowly fill with air, swelling into a barrel-like room connected to the Tranquility module. BEAM, the Bigelow Expandable Activity Module, is currently less than 2 meters long. But when expanded, it will have a volume of 16 cubic meters—large enough for astronauts to float in and perform periodic systems checks.

The expansion will take place in daylight, so the resulting visuals should be impressive. NASA said "designers need daylight and video communication to closely monitor the process." 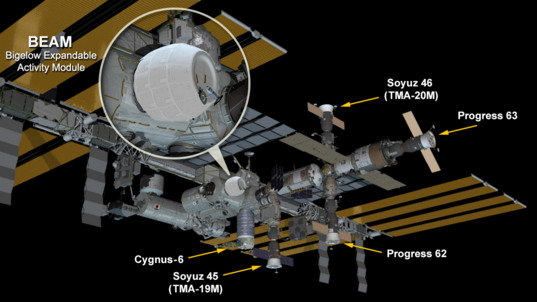 BEAM's location on the ISS

That all sounds pretty cool, but I have a more pressing question: Can I say inflate, or do I have to stick with expand?

I've previously used inflate, but have since noticed NASA and Bigelow exclusively use expand.

Merriam-Webster's first definition of inflate, as a transitive verb, is "to swell or distend with air or gas." The key word here is distend. Does the module material stretch like a balloon? Or is BEAM more like a tent, which just gets unpacked?

To know for sure, we'd have to ask Bigelow, and they haven't exactly been forthcoming on the module's properties. In a previous conference call, Bigelow representative Lisa Kauke wouldn't reveal the composition of the material or even how thick it was, and there is apparently no publicly available data on how well the module can withstand debris strikes.

So we'll have to trust NASA and Bigelow's word choice here and assume the module is more analogous to a tent than a balloon.

Which means we're stuck with expand.

In either case, it should be fun to see. We'll have more coverage tomorrow after it happens.

"Inflate" is absolutely the correct term, even if the material isn't elastic. But I'm sure that Bigelow focus grouped the term and found that potential space tourists associate the word "inflate" more worth bouncy castles than with a structure capable of withstanding the rigors of outer space.

Jason, since we inflate tire and tire is closer to a tent than a balloon. I think you are safe to say inflate BEAM.