This Friday, SpaceX plans to launch a Dragon cargo spacecraft to the International Space Station. Packed inside Dragon's unpressurized trunk is a new station module called BEAM, the Bigelow Expandable Activity Module. BEAM is a technology demonstrator designed to test the viability of inflatable space habitats, which compress into a small space for launch and inflate like a balloon in orbit. Inflatable habs are often pitched as the space modules of the future, with advertised benefits like protection from radiation and the extreme temperatures of space. 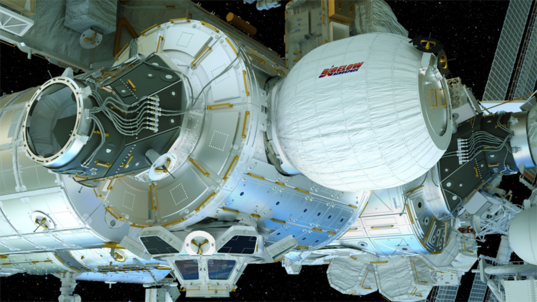 BEAM will be attached to the station's Tranquility module, at a 90-degree offset from the window-filled cupola.
"This is a launch we've been waiting for for quite some time, because it's really important to our overall ISS research program," said Julie Robinson, chief scientist for the ISS, during a conference call with reporters last week. "It has about 2,000 kilograms of research equipment and supplies. The big driver on that amount of mass, which is really high compared to our average, is that we have about 1,400 kilograms for the BEAM module itself."
Though BEAM represents a large portion of Dragon's cargo haul, it's incredibly light when compared to other ISS modules like Tranquility, which has a mass of about 19,000 kilograms. When filled with air, BEAM expands to about four times its packed size. Its total, inflated volume is 16 cubic meters—the size of a small bedroom.
BEAM represents an important private sector partnership for NASA, which dabbled in inflatable modules in the 1990s before the program was canceled due to a lack of funding. The Las Vegas-based firm Bigelow Aerospace licensed the technology and launched two, uncrewed expandable habitat modules in 2006 and 2007 called Genesis I and II. Both were just slightly smaller than BEAM.
"These two spacecraft outperformed all expectations," said Lisa Kauke, BEAM's deputy program manager for Bigelow. Kauke said the Genesis project showed the technology was ready for the next step: human occupancy.
"The main difference in the case of BEAM is that the module is certified to human-rated standards," said Rajib Dasgupta, NASA's project and technical integration manager for the project. "What that means is that some of the structural factors of safety for human-rated conditions are generally higher than what you'd get for a non-human rated module."
After launch, BEAM will spend at least five days getting acclimated to the vacuum of space. NASA flight controllers at the Johnson Space Center in Houston, Texas will unpack the module with the station's robotic arm in mid-April, and attach it to Tranquility. BEAM will be inflated around the end of the month or beginning of May.

Originally, the module was supposed to inflate using an onboard air tank, with the station's supply serving as a backup. NASA opted to reverse the process, and will now use an equalization valve to slowly bleed station air into the module at a slower, more controlled rate. The final pressurization will still be achieved using BEAM's onboard air tank. The entire process should take about 45 minutes—the daylight portion of a single orbit. The expansion is manually controlled; astronaut Tim Kopra will likely oversee the process.
BEAM contains a suite of sensors to collect four data sets. Some come pre-installed, while others will be placed by astronauts upon first entering the module. The loads imparted from BEAM to the ISS will be measured, including during the expansion process. There are also sensors to detect micrometeorite and space debris impacts, along with radiation monitors and temperature sensors.
BEAM doesn't actually do much after inflation; it mostly just sits there and collects data. It won't be used in an operational capacity for storage or living space. The crew is expected to go inside two or three times during a typical six-month Expedition increment, taking a couple hours to collect data. When the crew isn't inside, the hatch stays closed, though station air will continue circulating in and out of the unit.
The module will stay attached for two years. It's certified for five, but NASA plans to use that ISS port for other technology demonstrations (there are no official plans yet). After BEAM is jettisoned, it will spend about 290 days in space before tumbling back into the atmosphere.
Some BEAM specifics are proprietary. During the conference call, Lisa Kauke said she couldn't reveal the composition of the wall material, or even how thick the module was. There is, apparently, no peer-reviewed data beyond NASA on how well the module can withstand debris strikes. In fact, when asked what would happen if the module was punctured, NASA's answer was clear: that won't happen.
"Basically, nothing is going to happen," Rajib Dasgupta said. "BEAM has a very robust debris protection layer within its shell. Debris will not penetrate the structural layer of BEAM—we have tested it extensively. BEAM actually can resist space debris and micrometeorite orbital debris to the same extent that any other ISS module can." 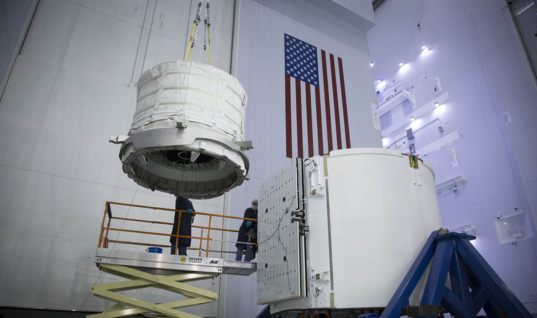 BEAM is hoisted into a SpaceX Dragon trunk in preparation for the CRS-8 supply mission to the International Space Station.
If BEAM works out, NASA may consider making the technology a part of its Journey to Mars plans. Inflatable habitats could be used in lunar orbit, for crewed trips to Mars, and in orbit of the planet.
Or perhaps on the ground. "On the Martian surface, as you know, there's a lot of abrasive materials," Dasgupta said. "We do have to do a lot of testing, especially on the exterior surface material of the expandable. The current material that we have on BEAM may not necessarily work for a Martian habitat."
Bigelow certainly envisions itself leading the way in inflatable habitats. The company received a NASA NextSTEP award, along with Boeing, Lockheed Martin and Orbital ATK, to develop a conceptual moon-orbiting hab capable of supporting four astronauts and an Orion spacecraft for 60 days. Bigelow's concept was based on the B330, a proposed private, inflatable space station with a volume of 330 cubic meters.
Those plans will be bolstered if BEAM is proven to be a safe design that offers advantages over traditional space modules. "It gives us the chance to raise public awareness of the robustness and the benefits of expandable habitats," said Lisa Kauke.

I was wondering why on an experimental wall system, there would not be a better entry hatch system? I spent twenty one years in the Navy and unless it were a void that was never entered, we would never use a hatch that had to be entirely removed. I know weight is a consideration. Yet I would easily add the weight of a couple of hinges and a securing system, that could easily be manipulated in the event of a major failure. Just my thoughts.