A tribute to Scott Kelly, astronaut and human being

Sometime before the one-year ISS crew launched from Baikonur in March 2015, astronaut Scott Kelly and cosmonaut Mikhail Kornienko participated in a televised, sit-down press conference at Johnson Space Center. Someone—I can't recall exactly who—remarked to me that Kelly seemed dull. At the time—and Scott, if you ever read this, I apologize—I agreed. 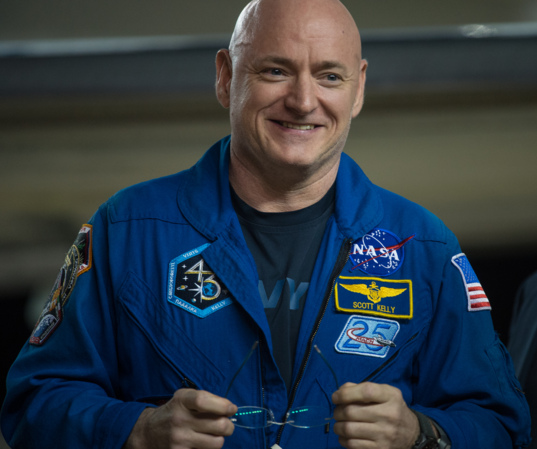 Kelly has been all smiles since returning to Earth after 340 days in space.

What are the traits of a typical astronaut? They're usually in good physical shape, they have advanced degrees, and they possess the mental focus to spend years preparing for a single mission. Many have military experience and a deep respect for the chain of command. They toe the company line—NASA's, that is. They're outwardly humble, like athletes who say "it was a team effort" after a big game.

An astronaut is the kind of person I'd feel comfortable putting forward if aliens landed and asked to see one of humanity's finest specimens.

But with all of the traits that make astronauts so suited to risk their lives for space exploration comes a trade off: They tend to be less emotionally volatile than you or me. And that's why I wouldn't be an ideal candidate for a trip to Mars. Sure, with physical training, I could try to get in shape, and I'm reasonably intelligent given proper guidance. But I'm also moody. I get bored easily. And I have a tendency to question authority.

In short, Scott Kelly might not want me as traveling companion. But I would want someone like Scott Kelly.

Have you ever met an astronaut? On the few occasions I have, I've wondered: Who is this person? What made them a chosen one, selected for what may be humanity's most dreamed-about job, over thousands of other people? What makes them tick?

Almost every moment of an astronaut's mission is meticulously scripted by other people. This, when combined with an agreeable, go-with-the-flow personality, can have the unfortunate effect of making some astronauts seem a little robotic. And I think that's what we saw with Kelly during that early JSC interview, when we were first getting to know the guy we'd be following closely over the next year.

Thanks to social media, and NASA's decision to let astronauts manage their own digital personas, we get to know individual crew members better than we have at any other time in the history of spaceflight. And as Kelly's mission progressed, more of his personality began to shine through. I've previously described him as stoic, and I think that's still accurate. But after consuming a year's worth of Kelly's videos, tweets and Instagram posts, he seems friendlier, warmer and more interesting than I originally thought. He wished us good morning and good night with a picture each day. He made occasional in-jokes. He traded barbs with his twin brother, and even, to a slight degree, President Obama.

Then, there was the gorilla suit.

Needed a little humor to lighten up a #YearInSpace. Go big, or go home. I think I'll do both. #SpaceApehttps://t.co/Ift8VdDR4C

It's hard to believe Kelly didn't momentarily consider that some NASA officials might frown upon the incident, since astronauts have been reprimanded for far less. But he did it anyway, tweeting, "Go big, or go home. I think I'll do both." Kelly, it seems, is not above risking a finger-wagging in the name of antics. (Rob Navais, the voice of Mission Control, also lended a hand on the joke.)

I also enjoyed the new PBS documentary "A Year in Space." The film includes interviews with Kelly's family, and does a nice job showcasing the beauty of spaceflight. In one scene, where Kelly's Soyuz swings around to reveal the distant, glinting outline of the International Space Station, I felt a lump in my throat. It reminded me how incredible it is that humans can ride controlled explosions into space and link up with other spacecraft.

When Kelly was pulled out of his Soyuz capsule with Mikhail Kornienko and Sergey Volkov earlier this week, he was positively beaming. NASA TV commentator Dan Huot said a cheer went up in Mission Control Houston. Kelly gave profuse thumbs-ups, cracked jokes, and smiled much more than I've ever seen. In every new batch of photos NASA posts, he seems to be smiling. And he made good on his promise to go home and jump into his pool in the middle of the night. With his clothes on.

Great to be back on #Earth. There's no place like #home! Taking the plunge after my #Houston arrival. #YearInSpacehttps://t.co/NhyLTbqcxS

NASA says the one-year crew mission was an important stepping stone on the Journey to Mars. It certainly makes sense that we'd want to start pushing astronauts to the limit while we can still do so in the relative safety of low-Earth orbit.

For me, the one-year mission accomplished something else: It humanized someone I considered "just" another astronaut. And by "just" another astronaut, I mean one of the top specimens humanity has to offer, winnowed from thousands of candidates. Kelly reminded me astronauts are more like us than we think. They're human beings with individual personalities that will shine through a mission-oriented facade—given the chance.

And that should all make us all feel better about human spaceflight. Astronauts are our species' ambassadors, so naturally, they should represent the best we have to offer. But on another level, we should feel proud when we see they're just like us.

#Countdown We're down to a wakeup. #Earth. I'm coming for you tomorrow! #GoodNight from @space_station! #YearInSpace pic.twitter.com/kLe2755XyG

Nice tribute to a most deserving individual... I imagine that before launch, with so much on his mind for what the next 12 months would involve and how important it is for human spaceflight to move forward, this may've come across as described by some in the media. Thankfully, as soon as he returned to his element, he showed the world what an amazing person he is. Go Scott.

WELCOME HOME! What a flight! Wish I was there too!

I really enjoyed this blog. Very very nice. ((Thank you Scott. Your adventure opened minds and doors for others to follow, and that makes you a very special person. ))