Eight months after the LightSail test mission ended with a successful solar sail deployment and fiery plunge into Earth's atmosphere, the program's successor spacecraft is deep into system testing, preparing for its day in the sun.

Now, the loaf of bread-sized CubeSat has a new designation: LightSail 2.

"Many series of spacecraft have used the convention of program name followed by a sequential number—for example, the Mariner line of spacecraft, Voyagers, and the Apollo program," said Dr. Bruce Betts, director of science and technology for The Planetary Society. "The LightSail program will now follow in this storied tradition."

To celebrate the name change, The Planetary Society has released a new video showing footage from a late January sail deployment at Cal Poly San Luis Obispo. In it, engineers carefully attend to the spacecraft as it unfurls four, Mylar sails into a kite-like pattern.

Unsurprisingly, January’s sail deployment tests revealed minor issues that engineers at Ecliptic Enterprises Corporation in Pasadena, California have spent the past few weeks working to resolve. The deployment motor hesitated several times, not unlike the way it did during LightSail 1 testing. There was a glitch with the spacecraft’s onboard cameras, which capture staggered images during the sail deployment sequence. And additional refinements are still being applied to the spacecraft’s communications and attitude control systems.

A second round of system testing is planned at Cal Poly. This will pave the way for a full, day-in-the-life test as soon as March, when the spacecraft demonstrates its core mission functions one final time on the ground.

In the meantime, the Prox-1 spacecraft, which will house LightSail 2 during its ride to orbit, is continuing to come together at Georgia Tech. Sometime around April, the two spacecraft will meet for integration. LightSail 2 and Prox-1 will ride to orbit aboard the first operational flight of SpaceX’s Falcon Heavy rocket, carrying the STP-2 payload for the U.S. Air Force. The mission date is dependent upon the readiness of the launch vehicle. 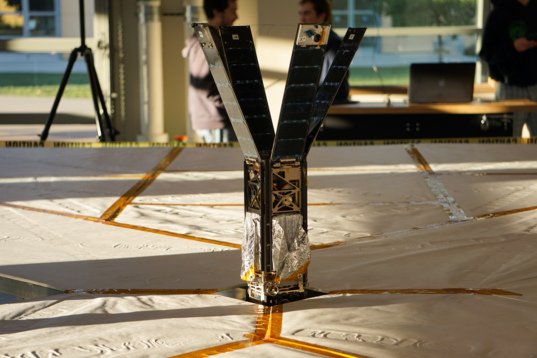 I was wondering if it would be possible to create a Cube Sat Carrier using the solar sail to carry smaller Cube Sat Solar Sails deeper into the Solar System to launch them at desired times such as chasing the orbit of Jupiter or the orbit of comet like Halley's Comet?