On Scott Kelly's 334th day in orbit, the NASA astronaut floated in the International Space Station, arms crossed, speaking with reporters as the station crossed the Atlantic Ocean toward the African continent.

Kelly, who launched back on March 25, 2015, comes home this Tuesday. He and his Russian counterpart, Mikhail Kornienko, have spent the past year participating in 28 experiments designed to see how the human body reacts to long-duration spaceflight. During that time, the duo have watched nine crewmates climb into Soyuz capsules and return to all the creature comforts Earth has to offer—things like gravity, and a natural atmosphere.

Now, it's Kelly and Kornienko's turn. They'll board their Soyuz with cosmonaut Sergey Volkov, who shuttled the spacecraft up last September. The three spacefarers will land in Kazakhstan about six hours later. 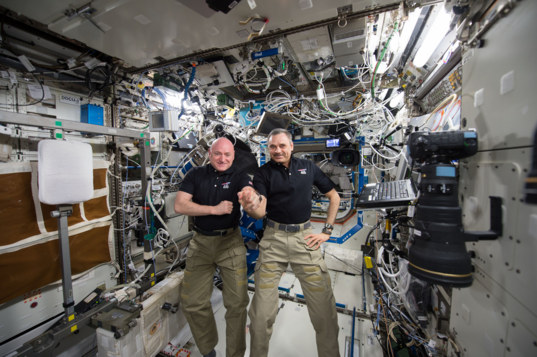 Daytime highs at the Baikonur Cosmodrome have been hovering in the fifty-degrees-Fahrenheit range. For Kelly and Kornienko, it should be refreshing, but there won't be much time to relax.

"Right after we get out of the Soyuz, they'll put us in the chairs that people often see sitting nearby the spacecraft," Kelly told The Planetary Society during Thursday's press briefing. "And then from there, we go into this medical tent. Once we're inside the medical tent, we're given a little bit of time to adjust. But then we go through about an hour of what's called the field test, that is various different types of experiments."

The idea of the field test is to see how well astronauts landing on a planetary surface like Mars can function—without assistance—after a year of weightlessness. Or, as NASA puts it: When you land, can you stand?

"Some [tests] are physical, kind of like an obstacle course, where you run around obstacles and stand up from a sitting position, and jump and stand," Kelly said. "It looks at our ability to adjust to those different positions. So it's pretty extensive stuff that we do pretty soon after we get back."

The experiments won't stop there. For the next year, scientists will continue collecting samples of blood, urine and saliva from the two crew members as they re-acclimate to gravity.

The resulting science won’t come quickly. NASA cautions it could be anywhere from six months to six years before the public sees published results from the one-year mission. Not all of Kelly and Kornienko's in-space bodily samples are even back on the ground yet. Some remain stored inside station freezers, awaiting a SpaceX Dragon capsule to bring them home.

The completion of the one-year crew mission marks a significant milestone for NASA, which has long touted the ISS as a testbed for deep space exploration missions. In the 2020s, the space agency plans to start sending humans to cis-lunar space, where they will stay for extended periods in preparation for eventual Mars trips.

Those lunar sorties will require astronauts to become more independent, in a region where an emergency return to Earth takes days, instead of hours.

"On a trip to Mars, we're not going to have this much space, obviously," Kelly said, referring to the station's six-bedroom-equivalent volume. "It's not going to be like the science fiction spaceship going to Mars—it's going to be something much more smaller."

Kelly guesses he has spent about half of his time aboard the station in his phone-booth sized crew quarters, where he sleeps and works on his laptop. In cramped conditions, personal space will be even more important.

"Making that private area as perfect as possible will go a long way towards reducing fatigue, reducing stress, and helping for a successful mission," he said.

After taking a half-hour's worth of questions, Kelly signed off in typical astronaut fashion, rolling end-over-end in weightlessness. Later next week, he won't be able to do that.

Kelly seems like a model astronaut for deep space missions. He's stoic and mission-focused, while showing a penchant for stress relief and the human admission that it will be nice to get back home to friends and family. The entire experience, he said, felt like a one-year camping trip.

So what will Kelly do when he gets back to Houston? First, there's a mandatory trip to Johnson Space Center, where another round of medical tests await. He won't get home until after 3:00 in the morning.