The place NASA intends to the land the first humans on Mars could be selected during the next presidential administration, according to the agency’s planetary science division director, Jim Green. The comments were made during a conference call held for attendees of last October’s Mars human landing zone workshop in Houston, co-sponsored by NASA’s human spaceflight and planetary science divisions.

At the workshop, scientists presented 47, 200-kilometer-wide Martian "exploration zones" containing resources and regions of scientific interest where multiple crews would visit. NASA intends to further investigate some of those zones using current spacecraft like the Mars Reconnaissance Orbiter, and develop requirements for a future Mars orbiter based on additional data needs.

"I can envision in a matter of handful of years, we’re going to go from these 40 to 50 sites down to a handful—maybe five or so—that we'll concentrate our efforts on, gathering extensive observations and information necessary for human exploration," Green said. "In that length of time, this next administration will have the opportunity to be able to say, 'this is the place we are going.' And that will make all the difference, for a very simple reason: Once we know the site, we can then design to it. When you design to anything, you then can do a cost estimate."

This video shows the concept of a 200-kilometer-wide Exploration Zone on Mars, where multiple crews would visit. EZs would contain various scientific and resource-laden regions of interest, or ROIs.

One of the larger questions scientists and engineers must answer is what role in-situ resource utilization will play in supplying astronauts with drinking water, oxygen and rocket propellant. Up until now, NASA has focused mostly on the propellant aspect, proposing that oxygen extracted from the Martian atmosphere could be used as a fuel oxidizer to help blast astronauts back into space. The Mars 2020 rover will carry an instrument called MOXIE to test out the extraction technique.

But because a wide variety of water resources were proposed at the workshop, the team behind NASA's Evolvable Mars Campaign—the long-term effort to send humans to Mars using a capabilities-first approach—is expanding its options.

"Up to now, the Evolvable Mars Campaign has, when it comes to in-situ resource utilization, been considering taking oxygen out of the atmosphere to use as fuel for the return, the Mars Ascent Vehicle," said Ben Bussey, the chief scientist for NASA's human exploration division. "In part, because of the workshop, the Evolvable Mars Campaign team is now looking at, if you had access to abundant supplies of water, how does that affect the architecture of how you get to Mars with people?" he said.

Surface water on Mars falls roughly into two categories: mineral and ice-based. Near Mars' equator, most of the water is locked up in hydrated minerals, and freeing it involves an energy-intensive baking process. At higher latitudes, water exists in ice sheets just below the surface, but it can be hard to quantify exactly how much ice is present, and how easily it can be accessed.

Exploration Zone proposers are now being encouraged to submit up to three image and data requests for the HiRISE and CRISM instruments aboard NASA's Mars Reconnaissance Orbiter. NASA will use the results, as well as the original proposals, to bracket the range of engineering constraints for hardware on the surface. Two sample exploration zones—one near the equator, and one in a high-latitude region—will be used to establish "day-in-the-life" scenarios for astronauts living in the region. This includes temperature variations, dust storms and other weather challenges, as well as the creation of sample routes that human-class rovers would traverse to reach areas of interest. 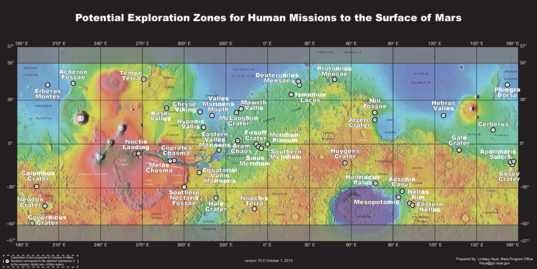 More than 40 proposed human landing and exploration zones are shown on this Mars elevation map.

Participants from the October workshop were given an opportunity to provide feedback on the 47 exploration zones proposed thus far. "About half of the presentations were considered to have made a strong case for the merits of their site," said Steve Hoffman, of NASA's Johnson Space Center. "A very positive finding. There were just a small number that, shall we say, need a lot more work," he said.

Officials continued to stress there would be no immediate attempt to downselect the landing sites. The three exploration zones receiving the most participant votes were located in Melas Chasma, Jezero Crater and Gale Crater. Melas Chasma, located within the Valles Marineris canyon system, was the front-runner with nine votes. Respondants were drawn to the zone's canyon walls, which could provide a look into the planet's history, as well as the potential for recurring seasonal water flows.

Another meeting is expected to occur sometime in 2017. In the meantime, NASA may solicit an Announcement of Opportunity, or AO, to fund proposals that "support and accelerate the overall HLS2 (Human Landing Sites Study) effort," according to workshop planning documents.

Human landings on Mars might not happen for two decades. But Jim Green said selecting a landing site was an important early milestone if NASA is wants to resolve cost questions for "the naysayers that say we can't do that," he said.

"We will then be in a position to continue on with the opportunity for humans to explore Mars within our lifetime," Green said. "We have that opportunity at our hands, and I want everyone to recognize how important this work is."