The used rocket booster SpaceX flown back to Cape Canaveral for an upright landing is undamaged and ready to be test fired, said company CEO Elon Musk.

SpaceX recovered the rocket December 21 during a return-to-flight mission that successfully placed 11 ORBCOMM communications satellites into low-Earth orbit. During that flight, the discarded first stage flew back to Cape Canaveral and landed on a large concrete pad. It was a bulls-eye touchdown, with the rocket settling on the center of the SpaceX logo at Landing Zone 1.

The rocket was eventually trucked up the coast to Launch Complex 39A, the former space shuttle pad where SpaceX has constructed a large new hangar to house Falcon rocket cores. The launch site will eventually be used for crewed Falcon 9 flights and liftoffs of the triple-core Falcon Heavy. 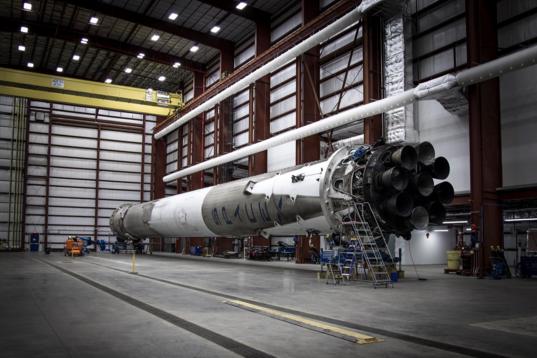 The rocket appears charred from atmospheric reentry, with the exterior paint undisturbed where four retractable landing legs are stowed until final approach. A closeup of the Falcon 9 logo and American flag showed some paint has been stripped away.

Paint job aside, Elon Musk said the rocket was in good health. "No damage found, ready to fire again," he said in a Twitter message on New Year's Eve. Musk previously said the rocket will be shipped back to the launch pad, raised into position and test-fired, but it is not expected to fly again.

The recovery of the stage marked an important milestone in SpaceX's push to make its rockets reusable. The company must now investigate how much effort is required to refurbish recovered stages before future flights, as well as show reused boosters are just as reliable as their pristine counterparts. NASA built the space shuttle with similar goals in mind, but refurbishing the orbiter's powerful main engines—as well as the vehicle's solid rocket boosters, which parachuted into the ocean—turned out to be more costly than originally predicted.

Just 15 minutes prior to the ORBCOMM launch, Musk completed a website post with additional details about the flight. He envisions two Falcon recovery scenarios; both assuming a combined upper stage and payload weight of 125 metric tons. For payloads requiring an initial first stage push of 5,000 kilometers per hour, the booster has enough capacity to return directly to Cape Canaveral. If the boost required is 8,000 kilometers per hour, the rocket stage will need to land on the company's autonomous drone ship in the Atlantic Ocean. Different velocity requirements are mostly attributable to the payload's orbital trajectory.

The drone ship has a smaller margin of error due to its deck size and the need to self-stabilize amidst turbulent ocean conditions. SpaceX's first drone ship, Just Read the Instructions, had a usable area of 46 by 76 meters (each leg has a span of about 18 meters). Two landing attempts on Just Read the Instructions failed, and Musk said the second was caused when the rocket hit the drone ship too hard, breaking two landing leg stops.

The next manifested Falcon 9 flight is January 17, when SpaceX is scheduled to launch NASA's Jason-3 ocean topography satellite into orbit. That launch will take place from Vandenberg Air Force Base in California, and send the satellite into a 66-degree, roughly 1330-kilometer circular orbit. Jason-3 will tail its predecessor, Jason-2, by one minute, allowing engineers to detect any instrument differences between the two spacecraft. 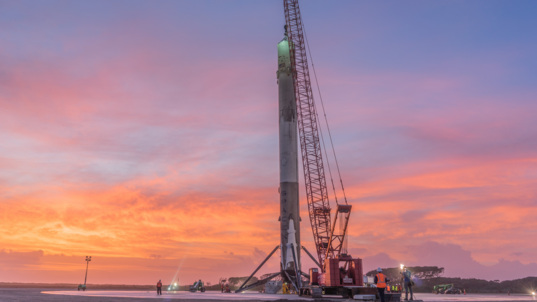 A crane prepares the Falcon 9 first stage booster for transport to SpaceX's Launch Complex 39-A hangar.

Land this back and then send it back up and it will be serious. Until that happens........it is not relevant. https://en.wikipedia.org/wiki/File:S-IC_engines_and_Von_Braun.jpg Landing back boosters is a dead end due to the scale necessary for large payloads. Boosters much more powerful than the Saturn V are required and the only way to reuse such monsters is to land them in the ocean. The solution, like so many others, was originally found decades ago and due to physics and materials science has not changed. http://ntrs.nasa.gov/search.jsp?R=19720015131