It was 4:49 a.m. EST (9:49 UTC) this morning when Kjell Lindgren, Oleg Kononenko and Kimiya Yui pushed back from the International Space Station in their Soyuz TMA-17M spacecraft. Most of the United States was still asleep. Three-and-a-half hours later, before many east coasters had their first cup of coffee, the capsule was on the ground in Kazakhstan, having lapped the Earth twice in its final, 400-kilometer plunge to the ground. 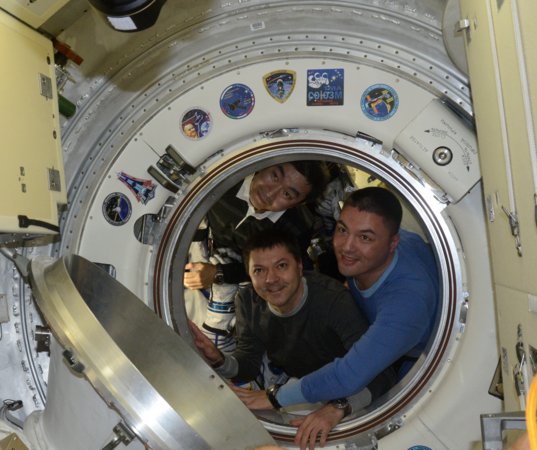 The sun had already set in Kazakhstan, but Russian recovery forces were quickly on the scene. Lindgren, from NASA, Kononenko from Roscosmos, the Russian Federal Space Agency, and Yui, from JAXA, the Japan Aerospace Exploration Agency, all appeared healthy as they were helped from their Soyuz, which had tipped onto its side. Lindgren made a phone call, smiling beneath a blanket as he sat in a chair on the dark Kazakh steppe, where temperatures had fallen below freezing.

Scott Kelly, the veteran NASA astronaut spending a year aboard the station, was present for both the crew's July 22 arrival and today's departure—a rarity, since Kelly would have departed earlier under a normal rotation regime. He likened Lindgren and Yui to baby birds that had earned wings during their time in orbit (of today's returning trio, only Kononenko had prior space experience).

Looking back on the crew's arrival, the baby bird analogy is even more fitting. When the crew first arrived at the station, they did so with a crippled wing, as one of their spacecraft's solar panels failed to deploy. It popped loose during docking. This made for two very different tweets by Kelly, six months apart:

New #ISSCrew arrival. The other solar array snuck out between my taking this photo and docking. #YearInSpace pic.twitter.com/wNLUz7qa3u

During the crew's 141-day mission, three cargo vehicles were shepherded into port at the ISS: a Russian Progress, a Japanese HTV, and just this week, an American Cygnus. Lindgren participated in two spacewalks; during one, the crew repaired the Alpha Magnetic Spectrometer experiment, and during the other, they worked on the station's ammonia cooling system.

The station is now operating under Expedition 46, with Scott Kelly, Mikhail Kornienko and Sergey Volkov remaining aboard. In just four days, NASA's Tim Kopra, Russia's Yuri Malenchenko and the European Space Agency's Tim Peake will launch to the station from Baikonur, Kazakhstan. This will be the final mission segment for Kelly and Kornienko, who will wrap up a year in space this March. The duo are participating in a series of experiments to see how the human body adapts to long-term spaceflight.

Next crew is @astro_tim @astro_timpeake & Yuri Malenchenko. Enjoy this view guys, I know I have. pic.twitter.com/MFbxBVI68s