United Launch Alliance plans to include a CubeSat carrier on nearly every one of its Atlas V and Vulcan rockets starting in 2017, the company announced today. Spots aboard the carriers will be offered for free to U.S. universities, which can begin applying to the new program in early 2016.

ULA already hosts secondary CubeSat payloads during many Atlas V launches, and has deployed 55 of the tiny spacecraft to date. Now, 24, one-unit CubeSat slots will come standard with every flight. "You won't pay to put CubeSat carriers on our rockets. You would have to pay to take them off," said CEO Tory Bruno in a video promoting the program.

The announcement was made at the Colorado State Capitol in Denver, a short drive from the company's Centennial, Colorado headquarters. "I have made it a personal goal to make space much more accessible for everyone," Bruno said, before revealing the program’s first free flight had been awarded to the University of Colorado Boulder.

A ULA infographic showed the CubeSat deployer would be attached to the rocket's Centaur upper stage via the Aft Bulkhead Carrier, or ABC. Previous CubeSat carriers, such as the Naval Postgraduate School CubeSat Launcher, NPSCuL, have used this same configuration. The NPSCuL also has a carrying capacity of 24 one-unit CubeSats. ULA did not specify whether it intends to use the same deployer. 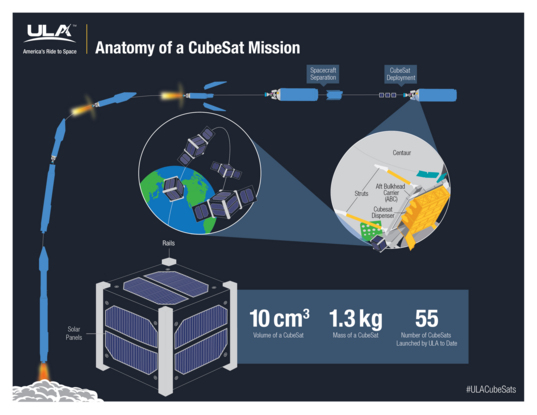 The announcement comes a month after NASA introduced its new Venture Class Launch Services program, which will use small, dedicated rockets to launch CubeSats to specific orbits. As the market for science, technology and commercial CubeSats continues to expand, so has the need for rides to space.

ULA is also offering universities the opportunity to name the new CubeSat program. The winning university will be offered one of the free launch slots.