Spaceflight company Blue Origin plans to launch its orbital rocket from Cape Canaveral, Florida, the company revealed Tuesday. The two-stage, partially reusable vehicle will fly from Space Launch Complex 36, which hosted Atlas rocket flights for more than four decades. "As a kid, I was inspired by the giant Saturn V missions that roared to life from these shores," wrote Jeff Bezos, the company's founder, in a blog post. "Now we are thrilled to be coming to the Sunshine State for a new era of exploration." 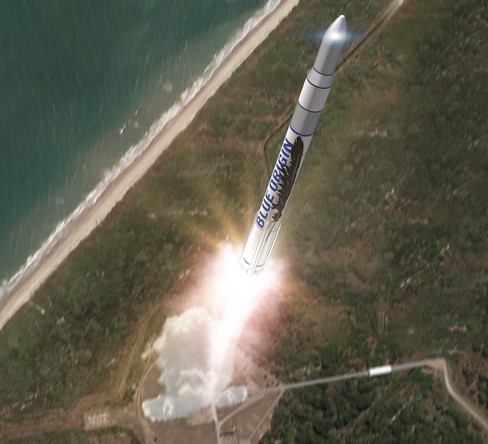 Blue Origin's yet-to-be-named orbital rocket will be powered by an upgraded version of the company's BE-4 engine. Two BE-4s are already slated for use on United Launch Alliance's new Vulcan rocket. The initial BE-4 variant has a listed capacity of 550,000 pounds of liftoff thrust.

The company plans to test the BE-4 onsite at Cape Canaveral. "You will hear us before you see us," Bezos said. Blue Origin will also build a production facility at Exploration Park, a 300-acre business enclave near the Kennedy Space Center Visitor Complex.

The new rocket's upper stage will be equipped with a BE-3 engine with an elongated nozzle. The BE-3 currently powers New Shepard, the company's suborbital vehicle that saw its first test flight April 29 in West Texas. The New Shepard is a booster and capsule system that can carry research payloads to a height of more than 100 kilometers, providing three minutes of weightlessness.

After releasing the capsule, the New Shepard booster stage deploys aerodynamic fins and drag brakes to guide the vehicle in for an upright landing. The core engine, the BE-3, restarts and slows the booster to just five miles per hour. Meanwhile, the capsule lands using traditional parachutes.

A similar system will be used to recover the core stage of the orbital rocket at Cape Canaveral. The upper stage is expendable, the company says.

Space Launch Complex 36 was home to 145 launches over 43 years of service, according to Bezos. It hosted launches of the Surveyor spacecraft, which soft-landed on the lunar surface, as well as the Mariner missions and Pioneer 10.