A key review of NASA’s Space Launch System did not uncover any major problems with the rocket's design, officials said at Stennis Space Center near Gulfport, Mississippi. SLS program managers and an independent panel will present the review results to various agency heads, ultimately finalizing a list of items needing to be resolved before assembly and integration of the heavy lift launcher begins. 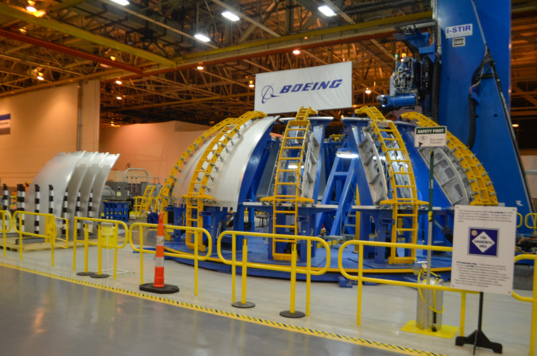 The aft liquid oxygen tank dome for the Space Launch System's inaugural flight, Exploration Mission 1, is assembled in the Gore Weld Tool at NASA's Michoud Assembly Facility. Dome panels (left) are built by an outside vendor and shipped to the plant, where they are assembled using vertical friction stir welds.

SLS is currently in project phase C, where individual rocket parts are already being constructed, but the vehicle has yet to move into full-scale production. At the Michoud Assembly Facility in New Orleans, Louisiana, sections of the first vehicle’s liquid hydrogen and oxygen tanks have already been completed. Starting next year, these pieces will be fused together at the plant’s Vertical Assembly Center, which is almost ready to resume operations after an alignment glitch stopped progress earlier this year. NASA says they remain on track to launch SLS by November 2018.

During the Critical Design Review, or CDR, program managers and independent reviewers poured through thousands of design documents to verify the rocket is ready to start coming together. "That's really when you complete the design," said SLS program manager Todd May. "It's pencils down, and you come up with a punch list of items you want to work with before you certify the design."

May, who emphasized his involvement in similar reviews for other major NASA programs including the Curiosity rover, said his team only found a handful of problems—none of which would require significant time and cost to address. "From my perspective, it’s probably the cleanest design review I’ve ever seen," he said.

William Hill, NASA’s deputy associate administrator for exploration systems development, agreed with the assessment. "It went extremely well," he said. "We had basically 18 areas we wanted to look at, half of which we knew we had to take a look at before the CDR." 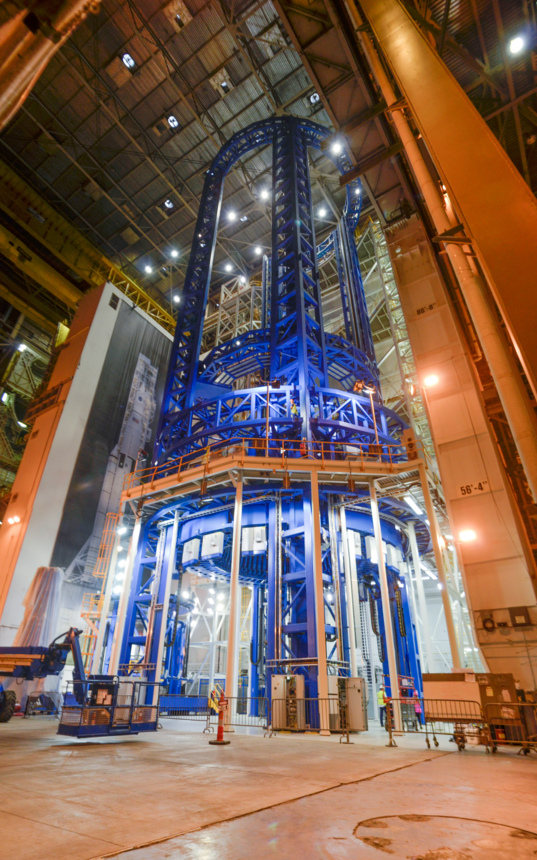 The 52-meter-tall Vertical Assembly Center at NASA's Michoud Assembly Center in New Orleans, Louisiana, is the world's largest spacecraft welding tool. Barrel, ring and dome sections of the Space Launch System's core stage liquid hydrogen and oxygen tanks slide into the machine, where they are raised and welded to other sections.

Last week at Stennis, NASA successfully test-fired the Space Launch System’s RS-25 engine for 535 seconds. During media tours of Stennis and Michoud, space agency officials updated reporters on the status of both SLS and the spacecraft it will carry to orbit, Orion.

Through an agreement with NASA, the European Space Agency is building Orion’s service module. The service module is the vehicle’s disposable, aft section that contains an engine and carries consumables like fuel and water. It is based on the Automated Transfer Vehicle, an International Space Station cargo craft.

Mark Kirasich, Orion's deputy program manager, said the European Space Agency recently completed the shell of the first service module. "That is the European service module," he said, showing a recent photo of the spacecraft’s superstructure. "That is a picture that was taken in Turin, Italy. It is the very first primary structure that the Europeans have produced." Kierasich said secondary structures would come next, before the module is shipped to Plum Brook Station, a testing facility at NASA’s Glenn Research Center in Cleveland, Ohio. There, it will be mated to other flight hardware before heading to Kennedy Space Center early next year.

At KSC, Orion faces 18 months of integration and testing before it is ready to fly. Hill said the November 2018 SLS launch deadline is still feasible, but he hopes to get the ESA portion of the work finished sooner rather than later. "We’re working with them and trying to pull the schedule to the left," he said.

I didn't mention it in the above posting but I still hope that NASA will still use the Space Launch System to get astronauts to the surface of Mars even before the late 2030s but I think landing astronauts on the surface of the Moon with somewhat similar gravity and size would be better practice for future Mars astronauts with the Space Launch System than a rendezvous with a rock from an asteroid that would be much smaller than Mars and not have any appreciable gravity.

dougforworldsexplr, The lack of a lunar lander and simulated gravity experiments, is a mystery. The explanation seems to be that they are going to the moons of Mars.I think that is what is going to happen. Going to a moon after all, just not ours. This is Phobos: https://www.marspages.eu/media/archive4/mars_express/marsmonde/PhobosOverMars1.jpg