A SpaceX Falcon 9 rocket broke apart over the Atlantic Ocean today during the company's seventh paid cargo run to the International Space Station. Following a successful 10:21 a.m. EDT (14:21 UTC) liftoff, Falcon flew flawlessly for more than two minutes. But 139 seconds into the flight, a white cloud appeared near the rocket's second stage, and the vehicle disintegrated shortly thereafter.

"What I can tell you at this point is that first stage flight remained nominal," said Gwynne Shotwell, SpaceX’s president and chief operating officer. "We saw some pressurization indications in the second stage which we'll be tracking down. We did receive telemetry from Dragon after the event as well." Data readouts on the SpaceX web feed froze with the vehicle at an altitude of about 45 kilometers, traveling at more than 4,700 kilometers per hour.

There was an overpressure event in the upper stage liquid oxygen tank. Data suggests counterintuitive cause.

The vehicle experienced an anomaly on ascent. Team is investigating. Updates to come.

The ISS-bound Dragon capsule was laden with 1.8 metric tons of crew supplies. William Gerstenmaier, NASA's associate administrator for the agency's human exploration division, said a spacesuit was among the items lost. Additionally, Dragon was carrying a new docking adapter in its unpressurized trunk, designed to allow future commercial crew vehicles to dock with the station.

"This is not really where I wanted to be on a Sunday afternoon," Gerstenmaier said, speaking to reporters during a post-launch press conference. "But spaceflight's not easy, as we've described to you before."

The loss of Dragon marks the third ISS resupply mission failure in just eight months. In October 2014, an Orbital ATK Antares rocket exploded shortly after liftoff. Six months later in April, a Russian Progress vehicle was left spinning out of control in orbit, doomed to an atmospheric reentry on May 7. "There's really no commonality across these three events," Gerstenmaier said, "other than the fact that it's space and it's difficult to go fly."

A mishap investigation will be conducted by SpaceX, with oversight provided by the Federal Aviation Administration. Since its debut in June 2010, the Falcon 9 has flown 18 times. Until today, the rocket's only major glitch came in 2012, when a secondary payload was lost due to a first stage engine failure. On that flight, the primary payload, another Dragon spacecraft, still made it safely to the ISS. Today's incident also delays SpaceX's efforts to recover the first stage of a Falcon 9 on an autonomous drone ship.

Despite the incident, both NASA and SpaceX fully expect to recover from the failure. A statement by NASA Administrator Charles Bolden said the crew has supplies to last several months. The next Progress vehicle is scheduled to launch July 3, and a Japanese HTV resupply ship is on deck for an August flight. "We expected through the commercial cargo program that we would lose some vehicles," Gerstenmaier said. "I didn't think we would lose them all in a one-year timeframe." 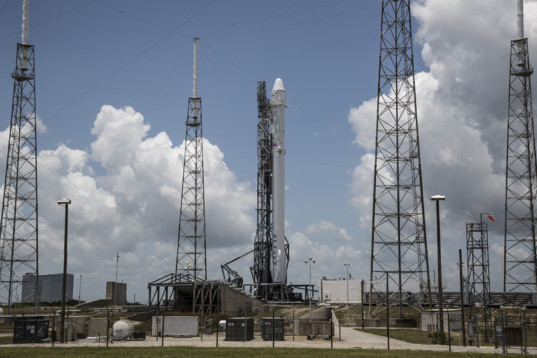 This is disappointing and heart breaking however SpaceX will recover.I am curious to know what telemetry was recorded and Elons' comment about the launching accident with the word counterintuitive really has my curiosity piqued. Hopefully the downtime won't be excessive, though a fair amount is to be expected. That's the nature of this business. You record what happened, document the site the best you can, pickup the pieces and figure out the fix, then flight test to be sure it is fixed and you haven't created a downstream problem in the process. I've done it with my personally designed rockets and it takes a bit of time. But I did it right. Mine flew after the fix without any more accidents until I retired her. SpaceX will prevail.

Definitely terrible news. Today was Elon's birthday. I'm sure he and everyone else was hoping to make history by landing the 1st stage successfully. Instead he got this. Total bummer. They will recover of course and press on.

Bob Ware:wrote: "This is disappointing and heart breaking however SpaceX will recover." I'm sure they will. But then it would be equally heartbreaking for those who lost equipment or experiments being carried aboard the doomed rocket. The 30 student projects, for example. Presumably they were insured, but getting the monetary value back for something you may have spent months or years constructing and getting onto a flight to the ISS would be small consolation. Especially if you now have to start over! Bon Ware wrote: "That's the nature of this business. You record what happened, document the site the best you can, pickup the pieces and figure out the fix, then flight test to be sure it is fixed and you haven't created a downstream problem in the process." Um, that sort of "stuff happens" attitude is all very well for test flights, not for flights of a non-test kind. I mention that because SpaceX and its competitors all dream of one day launching human beings into space. If when that day comes there is still a fair chance that shortly after launch the rocket will go KA-BOOM, then an attitude which goes "that's the nature of this business" is not really going to go down well should a KA-BOOM actually happen and human lives are lost. The plain truth is that if a rocket blows up on a non-test flight then somewhere somebody has stuffed up. Treating such stuff-ups as merely engineering lessons to be learned may be OK right now. That will less acceptable once human lives come to depend upon them NOT happening.

I was thinking the same thing .... Kind of wondered if this extreme of a failure should have been worked out before anything of value was loaded and sent onward & upward. I feel bad for the students who worked so hard on their experiments. I mean, how would we have felt if our Lightsail were on it? Not so okay I think...Anyhow, am so glad this was not a human test flight.

All commentors, so far, are assuming that this event was the result of an accidental failure of hardware/software and not the result of sabotage. At this early stage, nothing can be assumed or ruled out. Hopefully, in the course of time, the true cause(s) will be revealed.

Maybe next launch of a cargo craft will be able to abort and parachute to safety? The text from SpaceX said Dragon transmitted data after the explosion? How much force impacting the dragon from the explosion would be very helpful for future design. Is it structurally survivable? would a human survive the shock of explosion? SpaceX will be looking hard at these questions over the next few weeks. I wonder if the self destruct included the dragon? Either way SpaceX now knows what absolute worst case looks like and the forces on the spacecraft. Did anyone hear of recovery of parts of the falcon or dragon?