SpaceX is gearing up for its seventh paid cargo run to the International Space Station, and the third attempt to catch the spent first stage of a Falcon 9 rocket on a drone ship in the Atlantic Ocean. The company is scheduled to launch a Dragon spacecraft from Cape Canaveral this Sunday, June 28 at 10:21 a.m. EDT (14:21 UTC). Dragon is carrying about 1.8 metric tons of cargo and supplies. After the Falcon first stage gives the launch vehicle its initial boost toward orbit, it will separate, perform a boostback burn and come in for an upright landing on a thruster-powered landing platform. The first two attempts were unsuccessful, but close—Falcon made it to the ship both times. 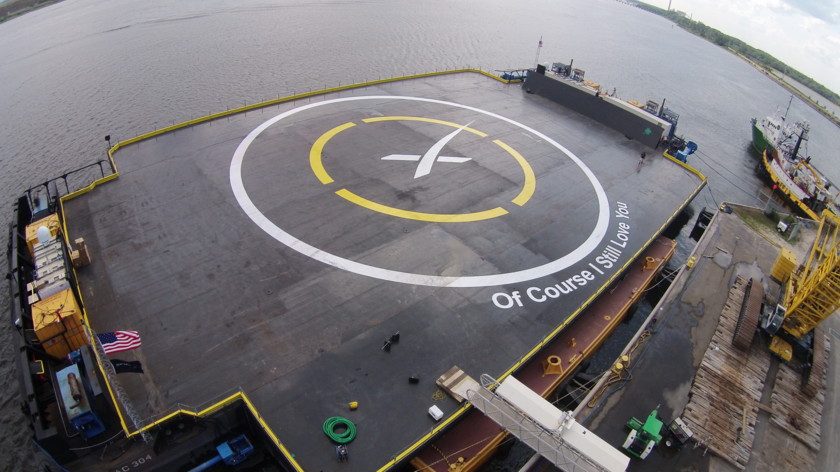 SpaceX's second drone ship is dubbed "Of Course I Still Love You," a nod to a ship from the Iain M. Banks novel "The Player of Games."

For this try, SpaceX’s new drone ship "Of Course I Still Love You" will be waiting. It takes over the role originally held by "Just Read the Instructions," the company’s first autonomous vessel. The names of both ships are a nod to the Iain M. Banks novel "The Player of Games."

In January, Falcon’s hypersonic grid system ran out of hydraulic fluid, causing the rocket to smash awkwardly into the drone ship’s deck. The second outing, in April, was much closer, with the rocket coming down nearly vertical as intended. However, lag in the vehicle’s engine system doomed the attempt, as explained by SpaceX in a recent update:

"That controlled descent was spectacular, but about 10 seconds before landing, a valve controlling the rocket’s engine power (thrust) temporarily stopped responding to commands as quickly as it should have. As a result, it throttled down a few seconds later than commanded, and—with the rocket weighing about 67,000 lbs and traveling nearly 200 mph at this point—a few seconds can be a very long time. With the throttle essentially stuck on "high" and the engine firing longer than it was supposed to, the vehicle temporarily lost control and was unable to recover in time for landing, eventually tipping over."

SpaceX continues to double down on their efforts to build a reusable rocket system. It’s all part of the company's increasingly large footprint on the Florida coast, where a former Atlas rocket launch site is being converted to a rocket stage landing complex. (Future Falcon landings may skip the barge altogether.) Meanwhile, over at Launch Complex 39A, the space shuttle's old pad, construction continues on a Falcon Heavy launch site. 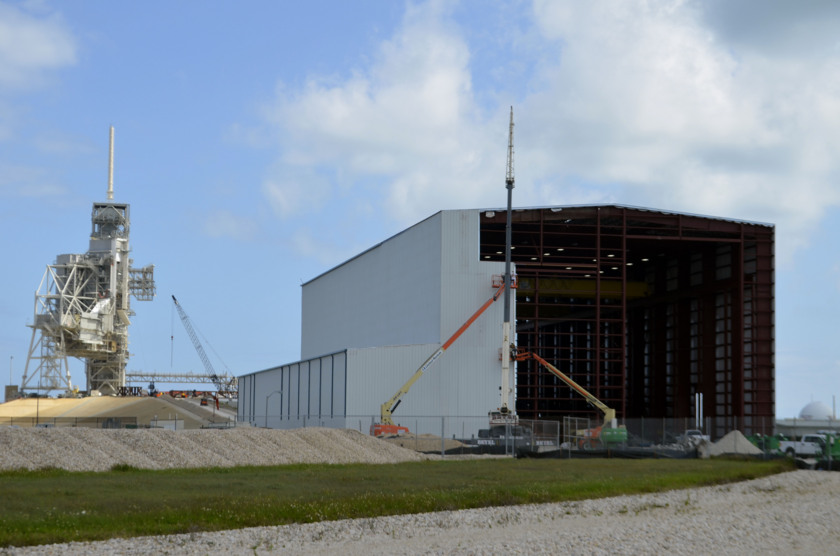 SpaceX hangar at pad 39A

SpaceX's rocket assembly building is located just down the hill from pad 39A. The facilities will be used for the Falcon Heavy.

SpaceX also recently released footage from a GoPro camera stuck to the inside of a Falcon 9 payload fairing. The fairing tumbles gently through space, with Earth and the sun sliding in and out of the camera frame. The video is set to the music of "The Blue Danube," by Johann Strauss II. The same musical score is used during a classic scene from Stanley Kubrick's 2001: A Space Odyssey. The clips are remarkably similar; one half-expects the SpaceX video to end with a Pan Am flight attendant approaching a napping Dr. Heywood Floyd, as a pen floats through the air.

Up on the International Space Station—where pens do, in fact, float through the air—Scott Kelly, Mikhail Kornienko and Gennady Padalka have the complex all to themselves for an extra month. The last three crew members stayed over until June 11, and the next group won’t arrive until July 22, all thanks to a Soyuz rocket malfunction that sent a Progress resupply vehicle tumbling back into the atmosphere.

Progress 59 launched on April 28. Just before the spacecraft separated from the third stage of its Soyuz carrier rocket, the rocket’s oxidizer and propellant tanks depressurized, with apparently catastrophic results. The spacecraft was left tumbling out of control, rotating at 90 degrees per second. Unable to stabilize and reach the station, Progress reentered Earth’s atmosphere on May 7.

Progress was riding a Soyuz 2.1a—an upgraded version of the stalwart rocket system boasting a heritage dating back to Sputnik. It was only the second time Progress rode the 2.1a variant; a later report by Roscosmos, the Russian space agency, said a "construction peculiarity" was "not duly taken into account in the process of the design and tests," according to a translated statement. In other words, something about the 2.1a third stage configuration didn’t mesh well with Progress. (By "third" stage, we mean the upper stage; the quad boosters and rocket core comprise the first two.)

The Soyuz capsule, currently the sole ISS crew transport system, uses a slightly different rocket system, the Soyuz-FG. Nevertheless, the incident was troubling enough for NASA and Roscosmos to delay the Expedition 44 launch of Kjell Lindgren, Kimiya Yui and Oleg Kononenko from May to July while the investigation continued.

If SpaceX’s Dragon capsule launches on time Sunday, it will arrive at the station Tuesday morning. Scott Kelly, assisted by Gennady Padalka, will grapple Dragon at about 7:00 a.m. EDT and install it to the Earth-facing port of the station's Harmony module. In addition to crew supplies, Dragon is carrying a new International Docking Adapter in its unpressurized trunk. The IDA will be used by future commercial crew vehicles to dock with the station.

I thought that Of Course I Still Love You was going to be the west coast ship, for launches from Vandenburg. Maybe Just Read the Instructions wasn't recovered yet for the CRS-7 attempt?

Yes, that was what Elon Musk originally said - Of Course I Still Love You was for Vandenberg. I'm not clear on whether this is a third vessel or the Vandenberg ship. It seems to be a third, but there's nothing official from SpaceX other than confirmation that this is a new ship.

Does anyone know the flyback distance that the Falcon 9 is capable of after separation? Curious if it is only a couple hundred miles, or could go further. For example, could the Falcan 9 booster go from Vandenberg AFB to New Mexico? Or only make it to the ocean...?