Telemetry received on the ground showed motor counts climbing to the halfway point before LightSail traveled out of range. Power levels were consistent with ground-based deployment tests, and the spacecraft’s cameras were on. "All indications are that the solar sail deployment was proceeding nominally," wrote mission manager David Spencer in an email update. 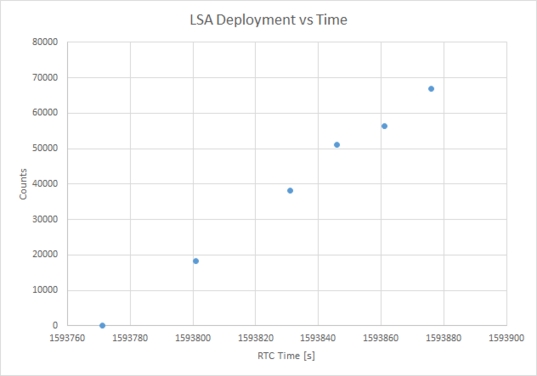 LightSail is currently out of range until 2:26 a.m. EDT Monday. Ground control teams at Cal Poly San Luis Obispo and Georgia Tech will begin transferring the spacecraft’s images from its cameras to flight system. A full-resolution image will be downloaded shortly thereafter.

In the meantime, radio operators around the world are encouraged to listen for LightSail and submit data (details can be found at the bottom of our Mission Control page), which could be invaluable in helping determine the spacecraft’s status before tomorrow morning's overflights. Two ground-based observatories will also be attempting to image the spacecraft, and amateur astronomers are encouraged to participate. The spacecraft’s current estimated position, along with details for radio trackers, can be found on our mission control page. All photographs and radio data can be submitted to lightsail@planetary.org.

Interested in catching a glimpse of LightSail as it soars across the sky? Here are a few viewing tips:

Our Mission Control Center predicts the next time LightSail will fly over your current location. Predictions are based on your device’s current location. If you’d like to specify a different spot, head over to N2YO.com and click “Set your custom location.” You’ll need to create a free account. 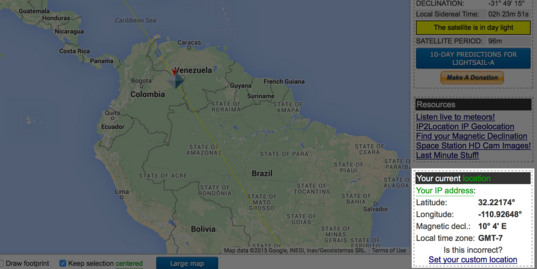 The start and end horizons are the locations LightSail should appear and disappear. Max elevation indicates how high it will get in the sky. Zero degrees is the horizon (assuming no obstructions), and 90 degrees is directly overhead.

Look for flyovers that occur around dawn and dusk. The best time to see any spacecraft—including LightSail—is when you are standing in Earth’s shadow but the spacecraft is still illuminated by sunlight.

LightSail may be running ahead of schedule. Depending on how long it’s been since we’ve received an orbital update from the Joint Space Operations Center, our pass predictions may be inaccurate. If you're going outside to look, consider starting a few minutes earlier than our listed times.

so happy for the mission

We have a great pass just after 10pm tonight June 8 here in Melbourne, Australia. I'll be looking and listening. I hope the sail deployment doesnt alter the orbital parameters greatly for a few days.

Hey, What would be really helpful is a real time map of earth and where equipment like the lightsail currently are. Maybe interactive so we could click on said equipment and get some basic telemetry data.

Wow, after all the silence, and suspense... Kaloo Kalay; we're on our way!

This is making it a very delightful morning. History!

Heard squelch go down and possible lightsail callsign on 437.420-450 MHz on pass above Seattle at 9:12 PDT. Need a better antenna to receive signal. CongratS to the Lightsail team on deployment!

I set an alarm just so I could see it fly over at 4 am this morning. It was easy to spot even with the bright moon out. The location chart worked very well. It was only about 5 minutes earlier than predicted. Go LightSail!!!

The New York Times says the only reason it's working right now is that a cosmic ray forced it to reboot and go into safe mode and Mission Control had nothing to do with it. http://www.nytimes.com/2015/06/08/science/space/lightsail-setbacks-spacecraft-prepares-unfurl-sail.html?hpw&rref=science&action=click&pgtype=Homepage&module=well-region&region=bottom-well&WT.nav=bottom-well&_r=0

So pleased. Been wanting this for a long, long time. Fly safe little Lightsail.

I thought in space, no one could hear you whir... :-) This is great - almost as exciting as the pictures of Pluto.

Looks like we've opened up another doorway to our future! We live in exciting times.

Fascinating. I think that the planetary society is doing a great join light sail and I like to learn much more about this experiment.