The first of The Planetary Society’s two LightSail spacecraft is now in space following a late morning launch from Cape Canaveral Air Force Station in Florida. Liftoff occurred at 11:05 a.m. EDT (15:05 UTC). The Centaur upper stage and primary payload are in their preliminary orbit, with LightSail and its CubeSat companions bolted near the aft section in the secondary ULTRASat payload. LightSail spacecraft separation is expected to occur at 1:05 p.m. EDT.

For a timeline of LightSail day one mission events, click here. 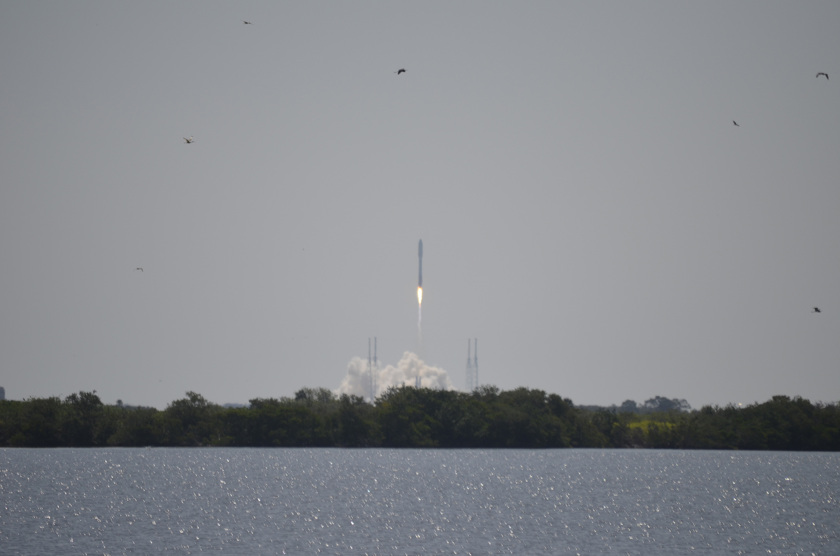 Launch of the United Launch Alliance Atlas V occurred on time under a cloudless, pale blue sky. The countdown proceeded smoothly without any major issues. Five and a half-miles away at the Kennedy Space Center Apollo/Saturn V Center, a group of about 50 Planetary Society staff members and invited guests were on hand to send the spacecraft on its way.

After LightSail deploys from Centaur, its autonomous flight sequence will boot, commanding the antenna to deploy 55 minutes later. First possible contact occurs at 2:19 p.m. EDT (18:19 UTC) when the spacecraft is in range of its Cal Poly San Luis Obispo ground station. However, since LightSail will initially be bunched together with nine other chirping CubeSats, it may take additional passes over both the Cal Poly and Georgia Tech ground stations before LightSail’s signal can be conclusively heard.

The first LightSail flight is a shakedown cruise designed to pave the way for a full-fledged solar sailing demonstration in 2016. For the second mission, a nearly identical LightSail craft will ride to orbit with Prox-1, an automated rendezvous demonstration vehicle built by students at Georgia Tech. Both LightSail and Prox-1 will hitch a ride to orbit courtesy of SpaceX’s Falcon Heavy rocket.

For the Planetary Society, the launch of LightSail marks the culmination of a six-year effort to send a solar sail CubeSat to space. The project began in 2009, but was temporarily sidelined by technical and funding challenges, as well as the need to find a sufficiently high-altitude flight. The spacecraft was originally built by San Luis Obispo-based Stellar Exploration, Inc. In 2014, Ecliptic Enterprises Corporation became the vehicle’s prime contractor, and Doug Stetson joined the team as project manager. Boreal Space serves as a contractor to Ecliptic. Testing and integration for LightSail occurs at Ecliptic as well as Cal Poly San Luis Obispo.

The link to the day one mission events post is broken.

This is a great day for all Members of the Planetary Society. #GoLightSaleGo

Since the LightSail will burn up on re-entry, I don't understand why it is necessary to have a shakedown flight. Couldn't you have gone for a higher orbit and if everything went well, just continue flying?

Congrats from the European quarter of the planet!!! Very exciting, a very smart and engaging way to marching forward, from the funding to the outlook on the means of how to move crafts through system Sol to come!!! Happy that all went well! Excellent coverage, thanks, Planetaries !