It’s been a little rainy in the bayou this year.

NASA’s Stennis Space Center, located an hour from New Orleans in southeastern Mississippi, has received 33.5 inches of rain through April. The average is 24. All that extra precipitation has, ironically, slowed planned upgrades on a water deluge system designed to cool the exhaust coming from NASA’s powerful rocket engines.

Over the next three-and-a-half years, Stennis will buzz with action as engineers perform about a dozen test firings of the RS-25—better known as the space shuttle main engine. NASA’s new rocket, the Space Launch System, uses four RS-25s to power its core stage. Eight engines have already been reserved for the first two SLS flights. All will eventually be test-fired at Stennis, culminating with a complete, four-at-a-time core stage trial that will pave the way for the rocket’s maiden voyage.

The engine tests take place at two test stands, A-1 and B-2, situated in clearings surrounded by thickets of trees. Stand A-1 is used for single-engine testing, while B-2 will be used for the core stage. The coolant water used for both stands comes from canals that supply a 66-million-gallon reservoir—enough to fill 100 Olympic-size swimming pools.

The hardware used to pump water to the test stands is vintage Apollo and shuttle, and has degraded over time. Stennis is upgrading the entire system, replacing large sections of it wholesale. On Friday, NASA announced the installation of a giant valve manufactured by Elmira, New York-based Kennedy Valve (no relation to Kennedy Space Center). The new valve connects sections of eight-foot-diameter pipes—plenty big enough to stand inside, as long as you leave before the 300 pounds-per-square-inch, 350,000 gallon-per-minute water supply gushes through. 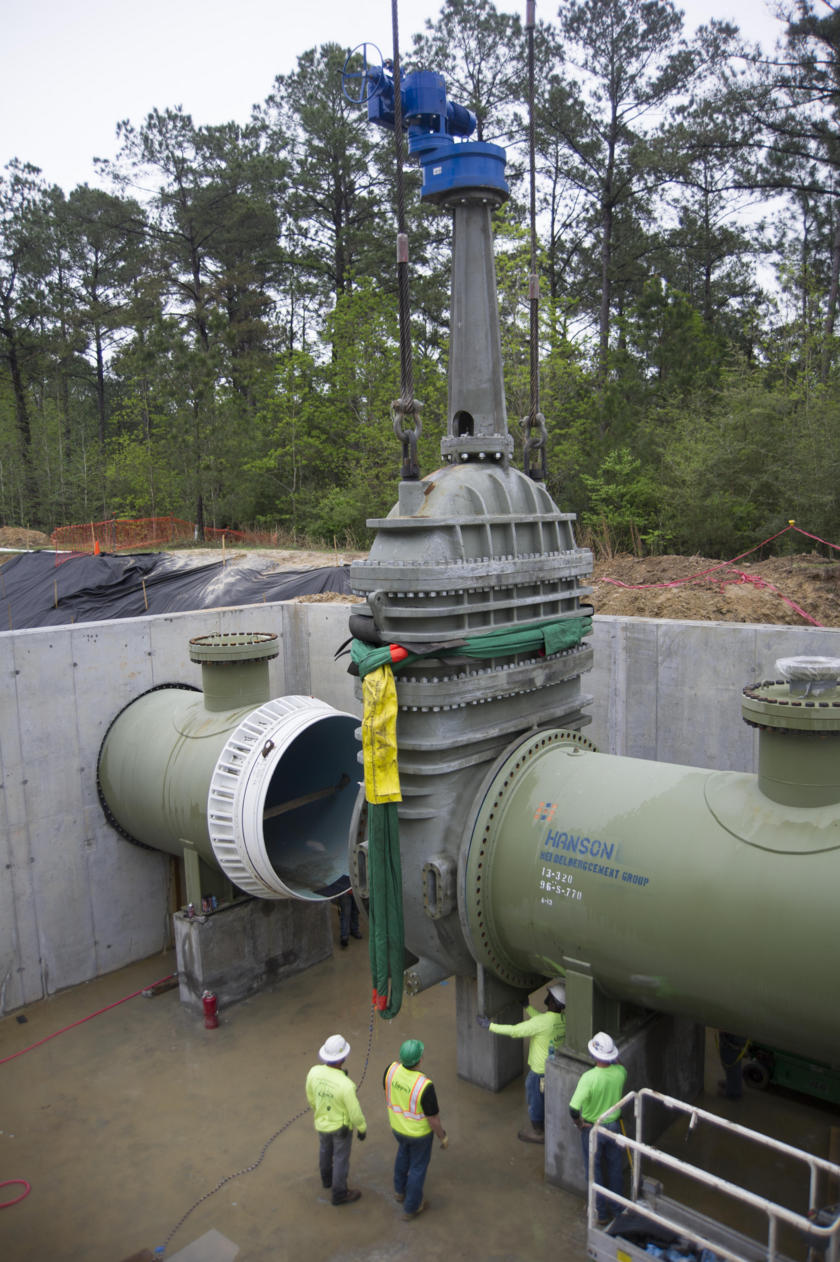 The valve installation is good news for development engine 0525, which has been sitting patiently on the A1 test stand. In January, it was test-fired for 500 seconds—the first time an RS-25 came to life at Stennis since the shuttle program. Testing was expected to resume as early as late April, but the inclement Mississippi weather—along with a few problems that cropped up while excavating the 50-year-old system, NASA said—have pushed the next test to late May or early June.

Here’s how things look over the next four fiscal years (a fiscal year runs from Oct. 1 through Sept. 30):

NASA also shared a few details on the RS-25 testing regimen with The Planetary Society. The development engine tests for fiscal year 2015 are expected to shake out like this (though these durations could be adjusted based on test results):

And here’s what engineers at Stennis, as well as NASA’s Marshall Space Flight Center, will be looking for during the tests:

Over at test stand B-2, work is progressing to get the rust-laden superstructure ready for the SLS core stage. It’s expected to arrive in fall 2016. The crane on top of B-2 was originally designed to handle the Saturn V first stage, but the SLS core is almost 50 percent longer. As a result, the crane is being overhauled. Inside B-2, new access decks are being installed, and the building’s electrical and plumbing systems are being upgraded.

A Saturn V rocket's first stage is lifted onto Stennis Space Center test stand B-2 (left) and fired (right) during the Apollo program.

NASA hopes to test-fire the quadruple set of RS-25s before early 2017, when the core stage is scheduled to be removed. It will be sent by barge to Kennedy Space Center. There, the space shuttle’s old engines will get one last look at their old stomping ground before powering SLS skyward in 2018. During the shuttle program, the engines came back to Earth with the orbiter. This time, they’ll tumble into the ocean—a gallant end for a powerplant responsible for lifting astronauts into orbit for three decades.

Another severe failure for the SLS. Having to reinvent the deluge system too. What is the point of reusing old vintage technology like the SLS, when none of the existing infrastructure can be taken advantage of? Even if it ever flies, it will contribute nothing to rocket science beyond what was established already 40 years earlier. It will be old on its first flight. It is a space flight archeology project. They actually redesign the shuttle's main engine in order to make it NOT reusable!