This Friday, three new crew members are launching to the International Space Station. One, cosmonaut Gennady Padalka, will come home in six months—the standard for ISS trips. But the other two, astronaut Scott Kelly and cosmonaut Mikhail Kornienko, will remain onboard for a full year. A handful of human spaceflight records will be broken: It will be the longest ISS mission to date, the most consecutive days in space for any NASA astronaut and the first time the Russians have tried this since the days of Mir in the 1990s. 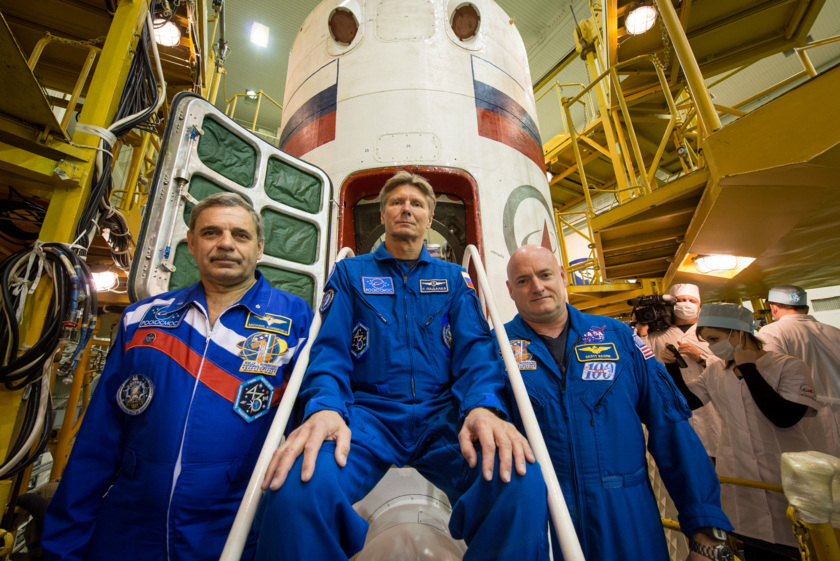 The crew of Expedition 43 poses outside their Soyuz spacecraft at the Baikonur Cosmodrome in Kazakhstan. From left: Mikhail Kornienko, Gennady Padalka, Scott Kelly.

The goal of the one-year mission is to learn how long-duration spaceflight affects the human body. A round trip to Mars could last between 12 and 18 months—not counting time spent in orbit and on the surface. We humans evolved in a place where an unseen force pulls our feet toward the ground at a rate of 10 meters per second, squared. When that force, gravity, is nullified by an interplanetary voyage or free fall in Earth orbit, our bodies change. The fluids beneath our skin shift. Our faces get puffy, and our legs get skinny. The extra fluid in our heads alters our vision. Our bones weaken, and our muscles lose strength. The carbon dioxide we exhale lingers near our bodies. The day-night cycle we've known for tens of thousands of years disappears. And spending months inside pressurized aluminum cylinders takes a toll on our psyches.

To that end, Kelly and Kornienko have agreed to spend a year in space—for science. Their urine, blood, stool and saliva will be sampled. High-frequency sound waves will be sent through their bodies. Their vision, cognition and motor skills will be tested. They'll capture their moods in journals. And when they finally return to Earth in March 2016, they’ll scarcely get a breath of fresh Kazakh air before scientists swarm in for more tests, including physical challenges designed to see how well humans might function after their hypothetical spacecraft thumps onto a dusty Martian plain.

How will all of this information be collected? With a battery of carefully planned experiments—18 in all, not counting a separate twins study that we’ll get to next. I read through each experiment's one-sheet description and tried to summarize the basic questions and data to be collected:

In addition to the Kelly-Kornienko studies, there are separate experiments taking place that include Scott Kelly’s twin brother, Mark. While Scott is in orbit getting poked and prodded by his ISS crew mates, Mark will be undergoing the same tests back on Earth. Because the Kelly brothers share the same set of genes, scientists can use Mark as a control subject. For example, how will Scott’s cells respond to a year of above-average radioactive bombardment? By comparing the two brothers’ data trends, the results should be more accurate. As an added bonus, Mark is a former astronaut, so he’s used to the rigamarole required for NASA experiments.

The upcoming year of ISS operations will, of course, be about more than just Kelly and Kornienko. Nine crew members will come and go during that time, carrying the station’s Expedition tally from 43 through 46. A bevy of other scientific experiments will be in progress. Bigelow Aerospace’s inflatable test module will arrive at the station. And the crew will continue to prepare the U.S. segment for the upcoming arrivals of SpaceX and Boeing crew vehicles.

Gennady Padalka, who launches Friday with Kelly and Kornienko, will return to Earth after six months. He will trade places with Sergey Volkov, who will fly a fresh Soyuz to the station in September. That spacecraft will also carry two temporary crew members: ESA astronaut Andreas Mogensen and space tourist Sarah Brightman. Mogensen and Brightman will fly home with Padalka in the first Kelly-Kornienko Soyuz after 10 days. During that week-and-a-half, the station will have nine people aboard. It hasn’t been that crowded since the space shuttle era.

Here’s how the crew roster pans out during the one-year mission:

On March 19, NASA posted some candid images of Kelly and Kornienko playing pool at the Cosmonaut Hotel in Baikonur. In most photographs, the pair rarely smile—they carry the stoic expressions of veteran spacefarers focused solely on their mission.

But occasionally, subtle grins crack through, and NASA’s Bill Ingalls captured one such moment as Kelly leaned in for a trick shot with a pool cue behind his back. The room’s bland decor, weathered pool table and distant dartboard—along with Kelly and Kornienko’s outfits—give the scene a military base feel. Add lower lighting, a bar and a few pints of beer, and you might be convinced that the duo are off-duty, hotshot pilots killing time before a dangerous mission.

Actually, that’s not far from the truth. Kornienko was a paratrooper who studied at the Moscow Aviation Institute, and Kelly was a Navy pilot. And while the meat of the one-year ISS mission involves mundane data collection, it isn't entirely without risk. Only four other humans have done what Kelly and Kornienko will do. Undertaking crewed missions to Mars will require long-duration spaceflight to become more of the norm rather than the exception. 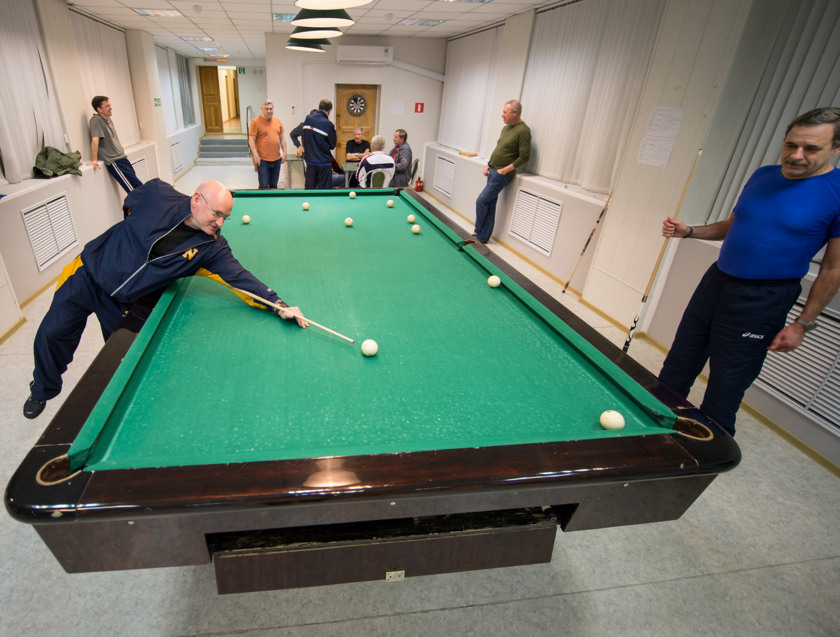 Astronaut Scott Kelly plays pool with cosmonaut Mikhail Kornienko before the duo launch on a one-year mission to the International Space Station.