Interview with an SLS Engineer: How Booster Test May Help Drive Golden Spike for Interplanetary Railroad

Tomorrow morning, in a corner of Utah wedged between the Great Salt Lake and Idaho border, NASA and Orbital ATK are test-firing a solid rocket booster. The 54-meter rocket—about the length of 12 sedans—will burn for two minutes, torching a nearby hillside. This is the first of two flight-like qualification tests to validate the booster’s performance before its brethren are attached to NASA’s new rocket, the Space Launch System.

It’ll be a good show. But the better display of smoke and fire will come during the rocket’s first flight, currently scheduled for 2018.

A few seconds before liftoff, four liquid-fueled RS-25 engines—best known for their decades of space shuttle service—will crackle to life. During the shuttle program, this caused the orbiter, boosters and external fuel tank to sway like a Florida palm tree in a motion known as the twang. The shuttle stack twanged because its unique design offset the orbiter’s liquid engines from the vehicle’s center of gravity.

SLS won’t twang. But just like the shuttle, the vehicle's onboard computers will make sure the liquid engines are all performing well before the solid rocket boosters ignite. You can’t turn off SRBs. Like backyard bottle rockets, they burn to depletion.

As it was for the shuttle, the aft SRB skirts will bear the entire weight of the launch vehicle. Each skirt slides over four posts to hold the vehicle steady. To keep the shuttle steady while it twanged, these posts used to contain explosive bolts that fired when the vehicle pitched back to center—right at the moment of SRB ignition. For SLS, there are no bolts. Even under the thrust of four mighty RS-25 engines, SLS won’t budge an inch.

But when the solids ignite, look out. SLS will leap through its posts and rocket into the sky, with its two boosters providing 75 percent of the vehicle’s liftoff thrust. One of these boosters now sits on its side in Promontory, Utah, held in place by a block of concrete for tomorrow’s test. 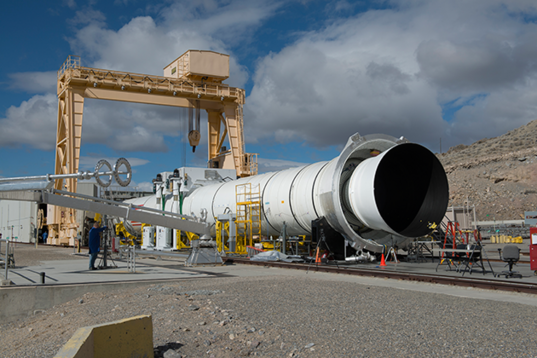 It’s always a pleasure to meet rocket scientists from NASA’s southern space districts, and Tim Lawrence is no exception. He’s the SRB motor assembly system manager at NASA's Marshall Space Flight Center. Like most Marshall engineers, he’s polite, explains things at length, and never shows disdain—even when you’re asking a dumb question. Tim has been working on NASA’s new solid rocket boosters since they were a part of the Ares program, which preceded SLS.

Tim spoke to me by phone from Utah, where he’s getting ready for tomorrow’s test. One of the things I was curious about is how one goes about igniting a solid rocket booster in the first place. The heart of the SLS booster is the motor, which is comprised of five propellant segments. At the top, that’s capped off with a forward skirt, nose cap and frustum. At the bottom, there’s an aft skirt that contains the booster’s avionics.

You can think of the motor section as a stack of donuts. Each donut is a propellant segment, and a bore hole runs through the center of all five. The space shuttle SRBs had four donuts; SLS boosters have five. (This is simplifying things a bit—the front donut, for instance, has a star-shaped cutout.) The donuts are comprised of solid propellant grain—mostly aluminum and oxidizer. To light the boosters, you need to get a flame going down the center of the bore hole. The process by which this happens is fascinating—there’s sort-of a Russian nesting doll aspect to it. Here’s Tim’s explanation:

We have an igniter. It's basically a small solid rocket motor in the front end of the motor. And it has about the same propellant that's in the motor itself—there's a few minor tweaks, but it's pretty much the same propellant. Inside of the igniter, we have a much smaller solid rocket motor called an initiatior. And then we have a pyrotechnic ignition device that lights that.

And all that happens in milliseconds.

Another interesting aspect of SRBs is their ability to throttle—which seems counterintuitive, as opposed to liquid engines where you can, for lack of a better phrase, step off the gas. At liftoff, each booster produces 3.3 million pounds of thrust. That number eventually increases to 3.6 million, and it’s all done through the design of the propellant. As more propellant surface area gets exposed to flame, more thrust is produced. In the booster’s three center segments—which include the fifth segment added for SLS—the initially small bore holes widen, exposing more propellant.  Conversely, the front booster segment has a starburst-like cutout that gives it more initial surface area, and thus, thrust, at liftoff. But as the starburst burns away, less propellant is exposed to flame. Tim explains:

The way we throttle a solid rocket motor is with our grain design. We basically throttle it back by having fins in the forward end. And as those fins burn out, that reduces surface area, and that causes the thrust to tail off. But the bore's continuing to open [in the center segments], so the thrust starts picking back up toward the end.

The center segments burn out last. The forward and aft burn out first. If you look at a thrust time trace, it comes up early and then tapers off. And that's the way you design a solid rocket motor in order to give you the thrust profile, because if we just had it come up to a certain level of thrust and stay—with our current design, when we go through maximum dynamic pressure—we would have too much load on the vehicle and it would break up.

So what we've added with this vehicle is a lot of thrust at the tail end. Overall thrust [over the shuttle’s boosters] is up 20 percent.

If you look closely during tomorrow's test, you may notice that the aft exit cone—the business end of the booster—is moving. It can gimbal five degrees in any direction, which helps steer SLS as it speeds into space. In reality, the typical flight profile probably won’t call for more than two degrees of swivel. Nevertheless, Tim says the booster will be put through its paces:

You can actually see the aft exit cone moving. It will move up and down, side to side, and we've got a sweep motion in the profile as well.

It's just like the shuttle design. We have actuators that are attached to the aft exit cone. And they will vector it, and the nozzle [located deeper in the aft section] will gimbal. The nozzle up has a flex bearing, which is a layer of rubber and a layer of steel. And that gives us the ability to gimbal the nozzle. The actuators push on the exit cone, and shove it wherever it needs to go, and it moves the nozzle on that flex bearing.

It will actually move beyond what it will move in flight [for the test]. What we're doing is not really checking out the system, because we know what it will do—we'll be measuring nozzle stiffnesses, the stiffnesses of the bearing, how much force it's taking to move it, and also demonstrating that we can go beyond our flight requirements and safely gimbal. 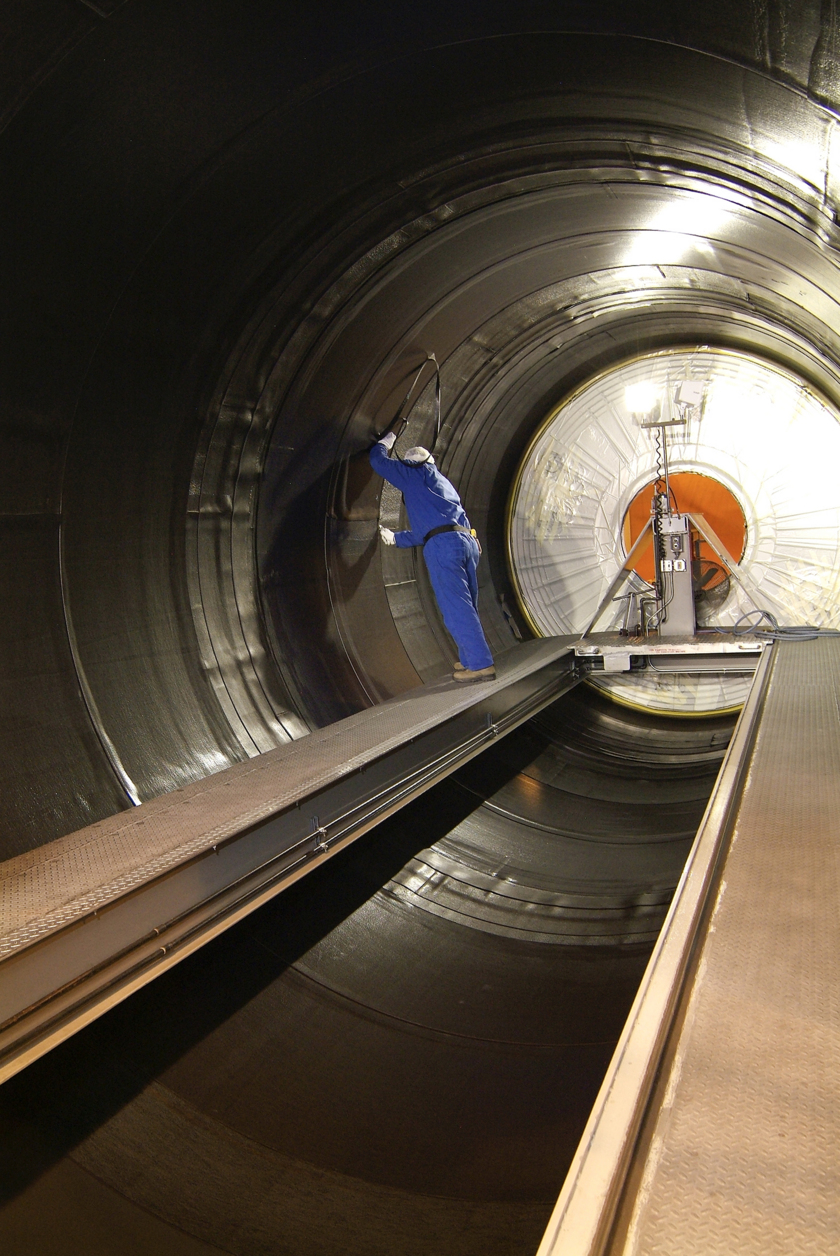 An Orbital ATK technician applies insulation to the inside of a solid rocket booster segment.

No interview with an SLS booster engineer would be complete without a discussion on the dreaded voids problem that sent NASA and Orbital ATK scrambling for a fix while the boosters were being developed. In order to protect a solid rocket booster's outer case from the heat and fury within, the inner case must be coated with heavy-duty insulation. For three decades of shuttle flights, this insulation was asbestos-based. Since inhaling asbestos causes long-term health risks, the new boosters use a rubber-based insulation. However, during propellant casting, gas bubbles seeped out of the new insulation, creating small gaps—voids—on the inner booster lining. Tim describes the fix:

On top of that, we found a chem-lock, a rubber adhesive that's used to bond pure rubber to other things. We have a layer of chem-lock that we put down, and then a thin layer of rubber on top of that. We call it a chem-lock cap-ply barrier.

This rubber adhesive, the chem-lock, is a very good barrier for gases that want to leak through during the casting process. The cap-ply material is the same material as the bulk insulation, so what we've done is thin out the base insulation and the cap-ply will replace it. It should not affect our ballistic performance, or the thermal performance of the insulation. The aft segment on this test has the fix on it.

When the Orion spacecraft splashed down in the Pacific Ocean following its December 2014 test flight, NASA TV commentator Rob Navias—who has an unmatched flair for the dramatic—had this to say: “Orion is back on Earth. America has driven a golden spike as it crosses a bridge into the future."

America’s original golden spike was driven in 1869, when the first transcontinental railroad was completed. The ceremonial hammering of the spike officially joined the West’s Central Pacific to the East’s Union Pacific, creating a rail route that transversed the country.

NASA says the Space Launch System and Orion are cornerstones of a program that will eventually land humans to Mars. If that happens, Navias’ comment will have been prophetic. And part of the effort to build a transplanetary railroad will have taken place in the shadow of another historical spike.